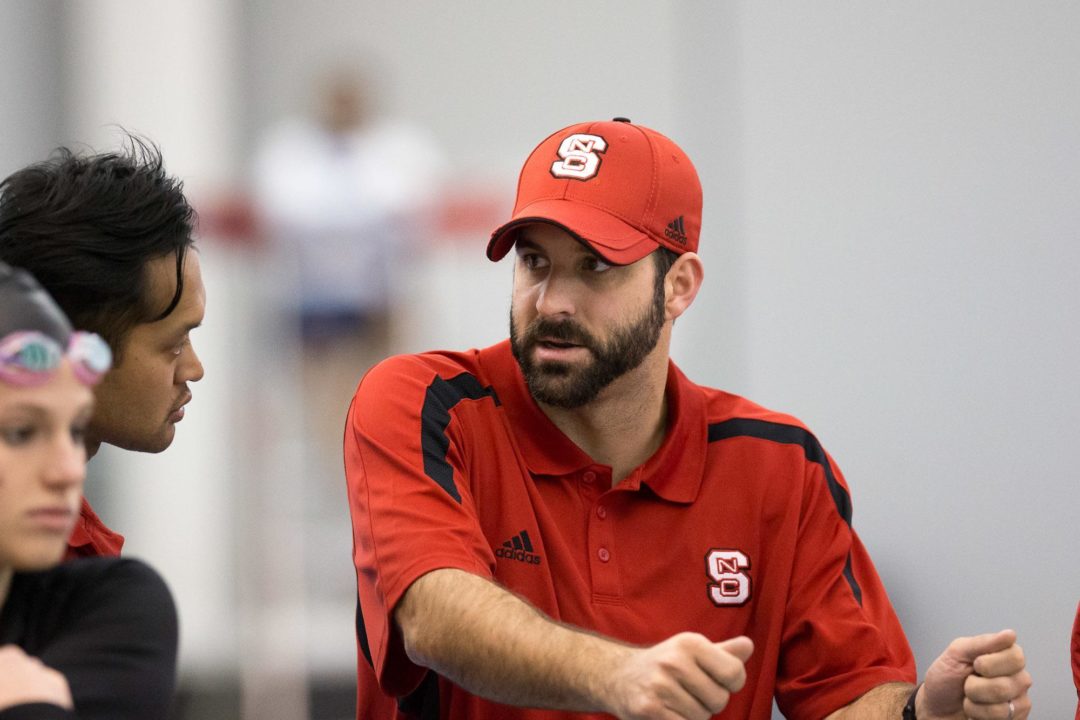 North Carolina State head coach Braden Holloway said that he prefers to talk with athletes, not their parents, during the recruiting... Archive photo via Tim Binning/TheSwimPictures.com

North Carolina State head coach Braden Holloway said that he prefers to talk with athletes, not their parents, during the recruiting process.

That’s what Holloway, one of the hottest coaches in the country right now, told an audience at the International Swim Coaches’ Association (ISCA) clinic in a video posted on the organization’s Facebook page.

“At the end of the day…the interaction with the parents is just going to be in a support mode,” Holloway said. “I want to know that I can be able to relate to this young man or this young lady and put my effort into them and know that I’m going to get it in return. If I don’t know that going into it because their mom and dad are doing all of their emails and phone calls…I think that’s one thing I think as club coaches you can help. Running through the club coach is different, because you guys are the ones that see them every day.”

Holloway, speaking to a room of primarily club coaches, was discussing what he looks for in a recruit and how the process looks from his end.

Recruiting tip from Braden Holloway of NC State:College coaches want to hear from the swimmers themselves.

That’s certainly the coaches side of it. Let me present the parent’s side for a little balance.

The coach is asking to leave the process\negotiations of a potential several hundred thousand dollar deal (I know NC State is public and not that expensive, but think about Stanford or Duke) to the buyer (coach) and a teenager who as often as not is a minor. And if it goes poorly, the folks left holding the financial bag are the parents.

I wonder if Coach Holloway would let his teenage child handle his next salary negotiation with NC State? I’m guessing the AD would prefer that…

I don’t think any ethical college coach would suggest leaving scholarship negotiation up to just the swimmer, unless the swimmer was somehow making up the difference on their own. Of course parents need to get involved when there is money on the table.

Braden is talking about the rest of the process. When I was a college coach potential recruits would really hurt their chances if their parents communicated to me for them (beyond possibly helping with some logistics of a visit, etc). Coaches want to hear from the student athletes themselves

I agreed with Chris. I think Braden talking about the ‘process’ not necessarily the financial part of it.

And Swimdad, you don’t swim for the coach but your son/daughter do. It is their college life not you, so let him/her get to know the program during the process. What you like not necessarily what he/she likes. When it comes to financially, then it’s time for your involvement

Totally agree with this… went through this with our child. Our son was recruited- other than a budget – which was discussed ahead of time we stayed out of it. He would talk about where his head was periodically and we would talk it through, but he decided. When it came to the financials of scholarship he would run it by us, but he made the final decision based on fit of the team and the school.

Swimfan, I never said the coach and swimmer shouldn’t talk to get to know each other. But let me run a real world scenario by you to illustrate the point you missed. Let’s say junior is chatting with the unbelievably friendly and life-long-buddy-to-be coach of Private U. And junior not, not fully understanding the real nature of this dance, happens to tell the coach that he has wanted to go to Private U since he was knee high to a grass hopper and would do just about anything to swim for his dream school. Now the coach, having been doing this for a while, smiles as he realizes he can likely get junior to come aboard for very little money… Read more »

This scenario seems to be a parent problem. You as a parent should educate your child before they speak with a college coach. They should understand that the college coaches job is to get them to swim at their school for as little money as possible. This is really the swimmers first educational step into the real world!
One last thought if it’s the swimmers dream school and the price is not right for the family, thn the parents must be grown ups and say no. These kids are going to college, by now they must understand they will not get everything they want in life.

The phone calls should be put on speaker so the parents can listen in with out saying anything. Let the swimmer do all the talking but the parents need to hear the coach, his tone, personality, and most of all the promises he makes. The coaches have done this hundreds of times. The swimmer and the family goes through this process once.

Say what? I’m pretty sure that your child may get voted most likely to party his or her freshman year. That’s really horrible advice. How do you expect your child to get to know the coach so he or she can formulate HIS or HER own opinion f their mommy or daddy is listening in on the call? That’s just crazy talk.

Most likely to party? What are you talking about? Anything the coach says to my swimmer should be able to be heard by the parents. If not; that’s a huge problem. Some of these guys are master salesman and not totally honest. I’ve heard it and seen it. It is very difficult for a 16 or 17 year old excited, impressionable teenager to see through some of that. Maybe that’s why there are all these transfers and decommits in college athletics. I hope your swimmer made the right choice.

I’m sure he did- thanks for asking.

I talked to every single coach on my own, was recruited by a lot of big schools in the big ten, acc and sec and my parents spoke to no coaches over the phone the whole time. I would make sure they approved of financial stuff but other than that it was entirely up to me, I think it should be that way.

Just a note, I don’t swim at nc state but I just agree with what he’s saying.