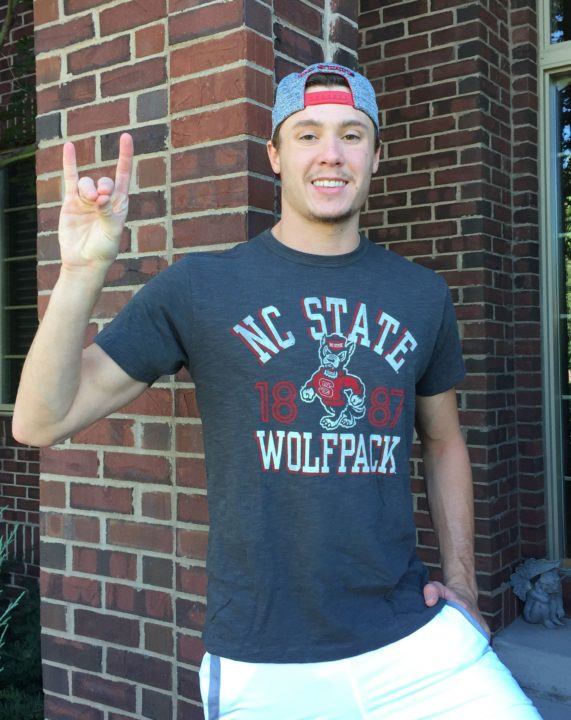 Jacob Molacek of Greater Omaha Aquatics, who left Auburn after the spring 2016 semester, has decided to join the NC State Wolfpack in the fall of 2017 after taking a gap year to train with his club coach, Tom Beck. Current photo via Jacob Molacek

The versatile Nebraskan was on our top 20 list for the high school class of 2014, having broken a national age group record in the 100 breast. He then spent two seasons at Auburn University, earning All-American honors his freshman year. In June 2016 we wrote that he had left Auburn and was weighing his options. And now, after a great deal of thought, Molacek has announced his intention to join the North Carolina State University Wolfpack in 2017, after a year of training with Tom Beck and Greater Omaha Aquatics.

Molacek confided, “It feels great to have a second chance. I’ve had the pleasure of getting to know Coaches Braden, Todd, and Gary throughout this entire process and they are some of the most relatable and personable coaches I have met. This, coupled by their immense and ever-expanding swimming knowledge, I feel, was exactly what I was looking for. Zack Warner, a friend of mine who also transferred from Auburn, was huge in giving me the ability to learn more about STATE. With this whole process, the main things I was looking for were great personable coaches, a training philosophy that fits me, and most importantly an accepting and positive team atmosphere. STATE blew all those out of the water so the choice was pretty clear in that regard.

“I am also grateful for the opportunity to take this gap year. Tom and I have a fantastic relationship. We plan on using this year to rework some of my technical stroke flaws and overall get my speed back. He and my GOAL teammates have been able to make swimming fun again for me just over the course of this past summer which has been huge. Coach Braden and Coach Todd are hugely supportive of Tom and additionally want to work together in order to understand me as an athlete better. I think that is amazing and I know not many other coaches would be willing to do that. Tom has always been somewhat ‘sage-like’ to me and the fact that NC STATE wants to be inclusive of him shows a great of deal respect.

“Sometimes in life you strike out, but it’s up to you whether or not you choose to get back up to bat. I want to be able to contribute and come in fired up to make a STATEment with this great team. The staff has been tremendously supportive of my decision to take this year off, and they are very understanding of my previous situation. At this point, it’s all about moving forward!”

This summer he went best times in LCM in:

Molacek has two year of eligibility remaining in his NCAA career. He will join a NC State team that is ascending rapidly, and could very well be a NCAA title contender in two years.

Great pickup for the Wolfpack. Very excited to see him back in college swimming.

Fall of 2018? So he’s taking two full years away from college swimming?