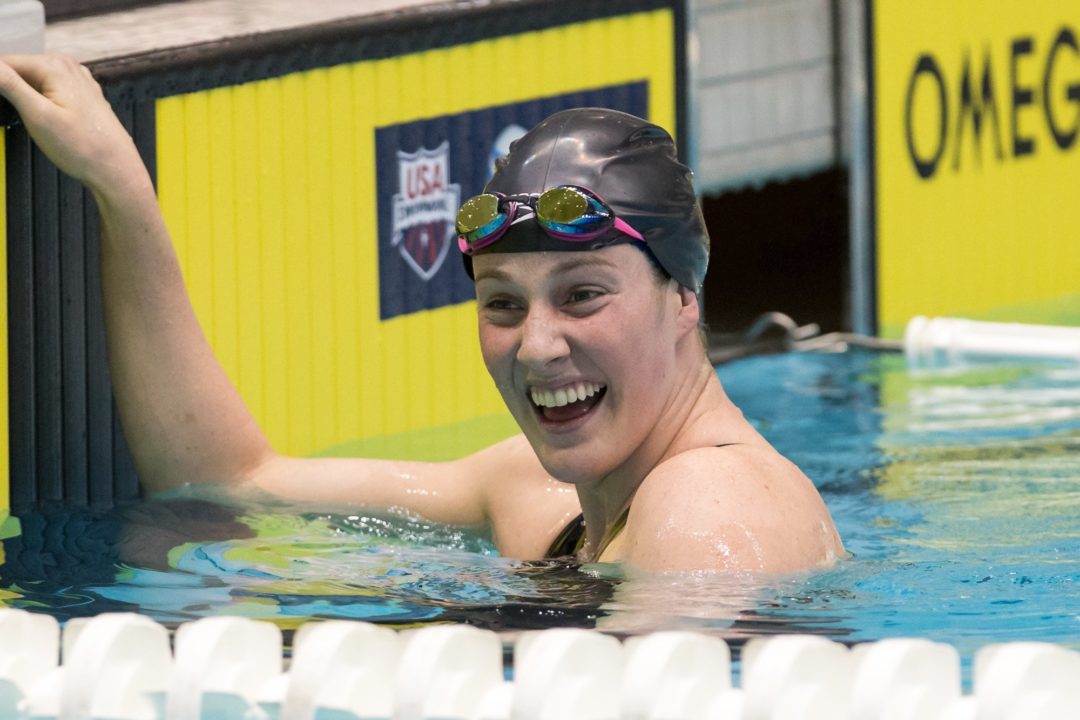 Missy Franklin looked like a woman on a mission, blasting her way to a blowout win in the 200 free and smashing records in the process. Archive photo via Tim Binning/TheSwimPictures.com

Maybe Missy Franklin was a little bit mad about a touchout loss in the 500 free on night 1 of NCAAs. The Cal freshman doesn’t have a lot of experience in losing, and though her always-bubbly exterior didn’t show any frustration, her 200 free on night 2 sure felt like a release. The Cal freshman went on a tear early, breaking away from the field and serving notice that she had no intention of missing out on her first NCAA title on this night.

Franklin blazed to a 1:40.31, destroying the field and the NCAA, American, U.S. Open and Championship records all in one fell swoop. Franklin was a woman on a mission during the race, going 48.71 to her feet at the 100 mark and blasting home with momentum. As fast as she went out, Franklin showed no signs of dying late in the race, posting back-to-back splits of 25.7 and 25.8 to emphatically shut the door.

The old NCAA record was just two years old, set by Megan Romano at 1:41.21. Franklin went 1:41.40 back in December to serve notice that that record’s days were numbered, but even so, the time she put up tonight was probably beyond what many expected of her.

Check out these crazy splits:

Franklin will be a part of Cal’s 800 free relay at the end of the night, so she could conceivable re-break the record, or at least put up the second-fastest swim in history, if she leads off. She’s likely to do that, but then again, how exciting would it be to see Franklin with a flying start and 1:39 within reach?

Of all the crazy swims going on between Orlando NCSAs and NCAAs, this is undoubtedly the craziest. What an unbelievable time.

As I wrote yesterday, Missy would go mad and turn HULK and smash the 200 record after being pipped by Maclean, and she also gets her revenge in the 800 FR.

It is crazy that she is the only Cal swimmer who lives up to expectations in this NCAA.

I would have to agree although Piehl had a good meet…I don’t know what happened with Bootsma and Pelton this year…something clearly did not click.
I’m satisfied with the way Tran has finished her career, although the illustrious 49 in fly/back is still eluded by all and I don’t know who can do it at this present moment.
Teri will keep her squad upbeat but the ‘sophomore’ slump…has to be addressed.
It’s not just at Cal but elsewhere too.

I agree, i’m surprised to see that Liz Pelton and Rachael Bootsma not near the top of their events, its seems strange. Are they sick, or is their focus somewhere else? Bootsma won the 100 back last year with a 50:2 and this year makes consolation and goes 51:64! I hope she wasn’t sick that would be terrible, but its nice to see former 100 back NCAA champion Cindy Tran back up to the top with a 50:81. Go bears!