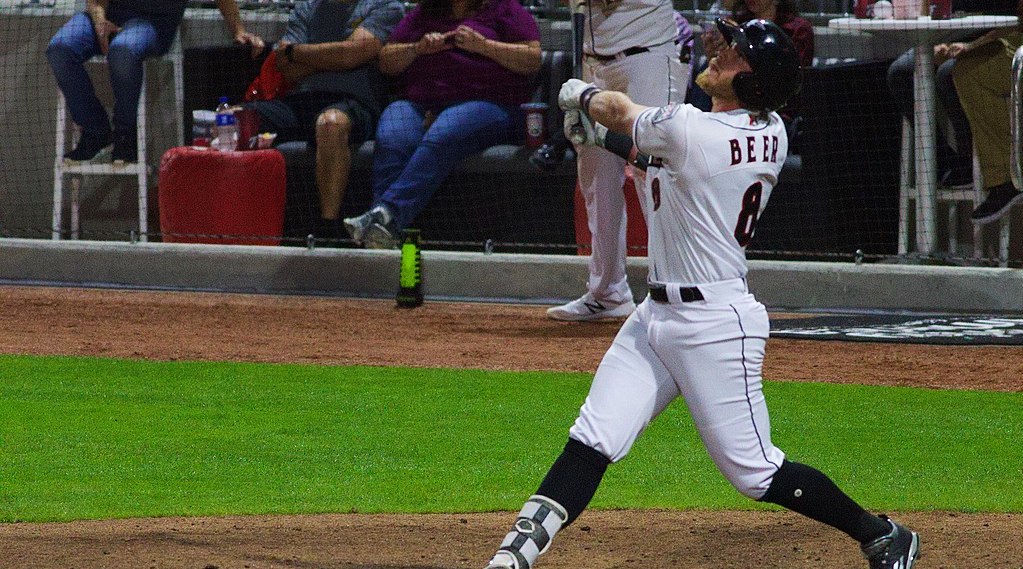 Beer held the 11-12 national age group records in the long course 50 and 100 back for years, although he gave up the sport full-time at age 13. Archive photo via James Alex Artis CC 2.0 license (Cropped)

An outfielder currently with the Arizona Diamondbacks, Beer was drafted by the Houston Astros out of Clemson in the first round in 2018 (No. 28 overall). The Diamondbacks officially added him to their roster Friday afternoon and he was called on to pinch-hit in the eighth inning against the Seattle Mariners that night.

With two outs and no one on base, Beer took Mariners pitcher Diego Castillo deep to right field, getting a dream start to his MLB career.

A former Swim Atlanta member, Beer stopped swimming full-time to focus on baseball at age 13 — but even with limited training, he found success swimming for his high school team. He was even offered the opportunity to both swim and play baseball at top schools including Auburn and Georgia, according to The Athletic.

He decided to dedicate himself to just baseball, however, and Clemson had recently cut its swim team. After finishing high school a semester early to enroll at Clemson in January 2016, Beer emerged as one of the best players in college baseball, amassing a .321 batting average and a .489 on-base percentage in 188 games (all starts) in his three seasons.

Beer still owns multiple top-five long course times in the 11-12 age group. His former NAG record of 28.49 in the long course 50-meter backstroke ranks No. 3 and his former record of 1:01.35 in the 100 back is No. 4 all-time (that swim broke Olympic gold medalist Ryan Murphy‘s previous record). That 50 back record stood for seven years before it was broken by Kevin Kyi in 2016 (and then was broken again two weeks later by Ronald Dalmacio). Vinny Marciano broke the 100 back record in 2o14.

Pains me to say it, but if he’s making MLB money, he probably made the right decision. (Let the downvotes begin…)

Absolutely made the right decision, just being a first round pick prolly put him ahead of all but like a dozen or so current swimmers in terms of earnings.

We all know MLB$$$ over Swimming any day

Ya know, it’s not so clear cut. Obviously Seth has a lot of career to go, but – at a similar age, Caeleb Dressel has made way more money than Seth Beer is. Probably by several multiples.

So, Dressel will never make as much as Mike Trout. But a top end swimmer makes more than a low end MLB player.

Yeah, but that’s just Dressel. How much have swimmers like Smoliga, Dahlia, Murphy, Chalmers even made compared to Dressel. They are also some of the top swimmers in the world.

Yeah I’ve written out enough clinic checks to know that all of those swimmers you named are probably doing pretty well, but definitely not at the level of professional baseball players.

lol why the hell would you use Dressel as the comparison. Best professional swimmer vs someone with under .300 OBP in the minors. Absolutely the correct choice.

Because swimswam are a bunch of DRESSEL fan boys 😂😂😂😂

Seth beer has never had an obp below 300. His minor league numbers were actually really good tbh

Just looked it up. He got $2.25 million as a signing bonus out of college and makes $570,500 per year. Not many swimmers make that. And he’s just up from the minors so his salary should go up.

I bet the closest comparison is kid that got drafted in the middle/late rounds and is a fringe MLB player versus a multiple swimming gold medalist, in that case the swimmer might win out.

I almost said it in my first post but he’d basically have to have Ryan Murphy’s swimming career to even be close to where he is right now with baseball imo.

Great story and congratulations to Seth! Swimming trains for greatness in all endeavors, both in and out of the water.

It may be just me, but it appears it was a homerun vs. the Seattle Mariners, not the San Diego Padres as the story alludes to.

The real question is when will he get traded to Milwaukee and live out his namesake?

Reminds me that Kiki Vandeweghe, the NBA player then exec, was like an MA level NAG record holder through 11-12 before he switched sports. His 10 and under 50 LCM fly record from 1969 wasn’t broken for 16 years. Oh, what could’ve been. His sister Tauna went on to do alright in swimming. His uncle Al won the 100 back in the ’36 Olympics.