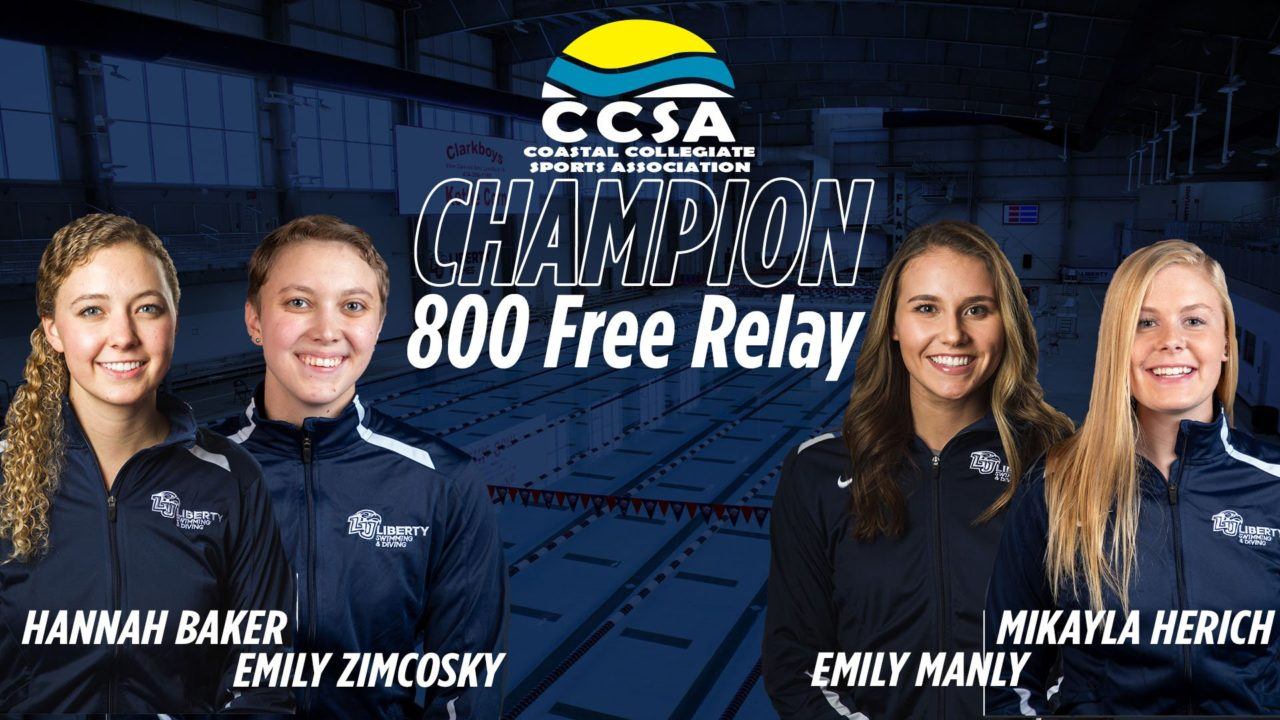 Due to weather conditions in Lynchburg, there were last-minute changes made to the opening day schedule at the 2019 CCSA swimming & diving championships. Specifically, the non-scoring 50-strokes and 100 IM session, plus diving prelims, were moved to 4PM, with finals starting 2 hours later at 6PM. That didn’t stop the host team Liberty from opening up a huge day 1 lead in the women’s meet, though – a lead they would’ve had regardless, but which was made bigger thanks to a DQ from their chief rivals Florida Gulf Coast.

All posted team scores only include the top 9 divers, and are therefore not correct. We have requested updated scores, and will post if we receive them.

The women of Florida Gulf Coast started the first day of the 2019 CCSA Championship meet on a high, winning the 200 medley relay by more than a second in 1:38.71.

Update: on Thursday, FGCU appealed the decision, and the disqualification was overturned, reinstating them to 2nd place in the relay.

Incarnate Word made a statement to open their title defense of the CCSA men’s meet, winning 2 of the 3 men’s events and cracking a 30-point lead already after 1 day (on a much smaller total-point-scale than the women, with only 18 scoring in each men’s event).

That includes a resounding 62.60 point victory on the 3-meter diving final from junior Dawson Martinez.

That win followed a 6:33.79 to top the 800 free relay with the quartet of Vlad Chumak, Leonardo Sanchez, Beau Fusilier, and Hector Ruvalcaba Cruz (a touchpad error messed up splits on the first two legs). FAU took 2nd in the relay, more than 5 seconds back, in 5:39.43, out-touching Gardner Webb by .05 seconds.

Although they were out-touched in the relay, Gardner-Webb improved their previous season-best time by 22 seconds. That foretold a big 5.5 second drop in the 200 medley relay to close the night, which was enough to knock off Incarnate Word in the day’s final men’s event. Brady Fields, Jordan Mintz, Seggio Bernardina, and Zach Dingfield combined for a 1:28.01, while Incarnate Word’s runner-up relay swam 1:28.88.

Old Dominion took 3rd in the relay while FAU, the team with the next-best diving squad besides Incarnate Word, was 4th.

Liberty women led most of the race and won by over 10 seconds! With or without the DQ, Gulf Coast got crushed in this race.

Coach Jake’s ladies are on fire. Nothing wrong with the starting system now……just some darn fast racing.