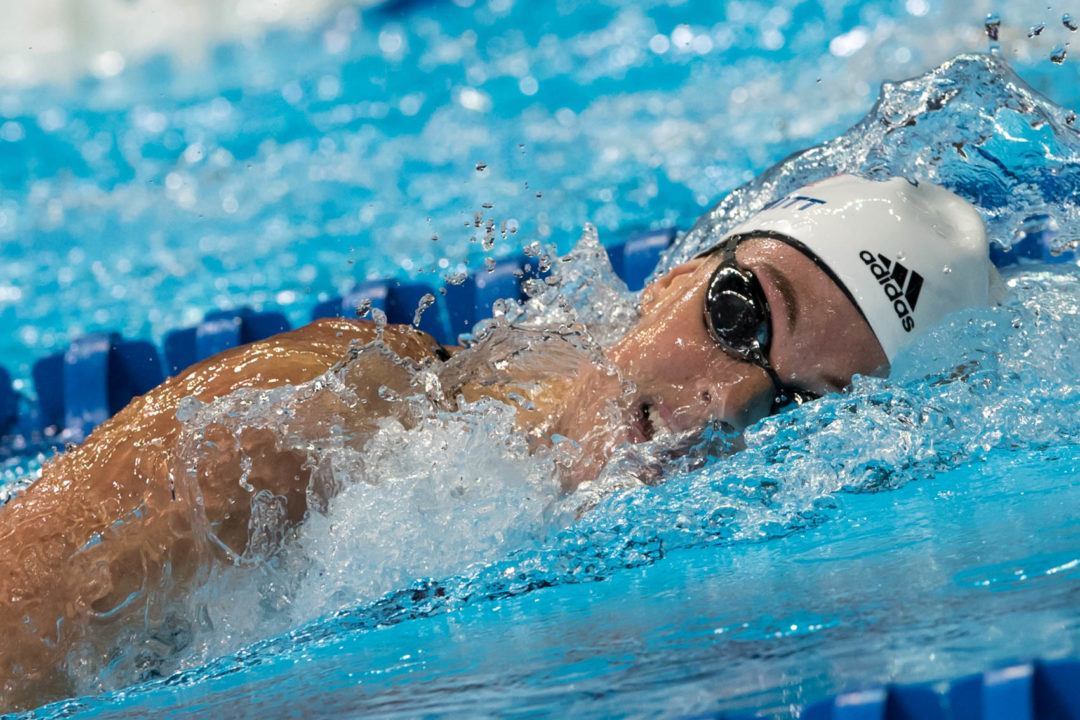 The 2012 Olympic Champion in the 200 free, Allison Schmitt, is expected to get back to racing this weekend in Mesa. Archive photo via Mike Lewis/Ola Vista Photography

The next stop of the 2018 TYR Pro Swim Series will be in Mesa, with the first events kicking off tomorrow, running through Sunday’s distance events. Here are five storylines to follow as some of the best pros, collegians, and age group stars battle it out this weekend.

Remember, these are not the ONLY storylines to follow at this meet. There are, surely, plenty more interesting things to delve into. These are just five things that stuck out to us — feel free to discuss additional interesting tidbits in the comments!

The 2012 Olympic Champion in the 200 free, Allison Schmitt, is expected to get back to racing this weekend in Mesa.

Though Schmitt hasn’t raced competitively since 2016, she never made any retirement announcements, and never left the USADA drug-testing pool. Whether or not she plans on pursuing a spot on the 2018 Pan Pacs team is yet to be determined.

On the women’s side, Comerford, along with Abbey Weitzeil, Lia Neal, Margo Geer, Kelsie Dahlia and Amanda Weir are entered to race the 100 free.

It’s pretty clear that Comerford and Simone Manuel are the favorites for the relay in Pan Pacs, having consistently been sub-53 flat start. Katie Ledecky and Dahlia were on the relay last summer in Budapest; Dahlia was a strong 53.16 split, and Ledecky was 53.83, but Ledecky won’t be racing this weekend.

Dahlia has to be one of the stronger candidates for the relay. Meanwhile, Neal is incredibly consistent, while Geer has found new speed recently, hitting sprint free lifetime bests already earlier this year. There’s also some intrigue with Olivia Smoliga, now a full year out of NCAA swimming — she’s entered in this race in Mesa, and she swam on the prelims relay in Budapest.

For the men, there isn’t as sprawling of a cast to check out. Still, Nathan Adrian is the top seed in the 100 free, and he and Caeleb Dressel (Dressel won’t be at this meet) are two favorites for the relay this summer. It’ll be interesting to see where Blake Pieroni is– the Indiana University senior is the second seed (48.23), and after his sub-1:30 200 free performance at NCAAs, expectations are a bit higher for his performances this summer.

Meanwhile, Michael Chadwick is the third seed (48.48), and he’s another name in the mix for the relay this summer.

The U.S. men have a solid group of guys who have been jockeying for international roster spots over the last year or two.

Adding to the growing list of top American breaststrokers are Michael Andrew (59.82) and SCY American record holder Ian Finnerty (1:00.09). Finnerty is riding a huge wave of momentum following his thunderous wins at the 2018 NCAA Championships in both breaststroke races, and while it’ll be pretty tight among all of these men for Pan Pacs berths, Finnerty may have the hottest hand this spring.

#4 FACES WE HAVEN’T SEEN IN AWHILE

They’re all entered to race this week. Dwyer hasn’t logged a swim since last August, Jones hasn’t since November, and Sumrall’s first swims at any meet higher than a state championships, since 2016, came in March at the Atlanta PSS stop.

Chase Kalisz was unbeatable in both IM’s last summer in Budapest, and he’s looking to gain some momentum into the 2018 championship season.

I want to see Finnerty do something unexpected.

I mean we just did less than a month ago xD

Finnerty is for me one of the great US mysteries of the next summer. With also Ella Eastin or Erica Brown. How will they convert their big SCY progression into the big pool?
Last year Finnerty swam 51.38 in SCY and 1.00.09 in LCM.
This year 49.69 in SCY and x in LCM.
It’s not crazy to think that he will swim at least under 59 in long course. His stroke is great for long course.

I bet Eastin finally has her big long course breakout. She has been steadily improving and had huge short course gains in all her events. Also, the 200 fly and 400 IM are pretty open events, and the 200 IM is in no way sewn up

Keepin an eye on the weather forecast for wind: https://bit.ly/2JG0uaz