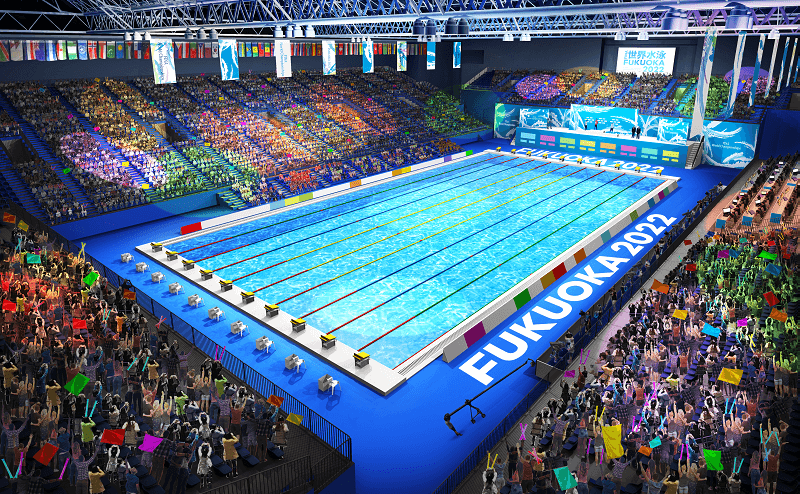 The 2022 Masters World Championships will be postponed to 2023 alongside the FINA World Aquatics Championships. The Masters event won't be replaced in 2022. Current photo via FINA/Fukuoka 2023 (Artist's Rendering)

FINA has announced that the 2022 World Masters Championships have been rescheduled for August 2-11, 2023 in Kyushu, Japan.

The event was originally scheduled for May 31-June 9, 2022, hosted jointly by the cities of Fukuoka, Kumamoto, and Kagoshima on the island of Kyushu, Japan. That includes using the same Fukuoka pool scheduled to host the FINA World Aquatics Championships, as has become recent tradition.

But after that championship was rescheduled to 2023, so too was the Masters event.

There will be no Masters event attached to the newly-formed 2022 World Aquatics Championships in Budapest, FINA says.

The Masters meet is arguably the bigger financial windfall for the host city: whereas the 2019 World Aquatics Championships had around 2,600 competing athletes from 192 nations, the World Masters Championships are expected to draw around 10,000 athletes from 100 nations. That is almost as many as athletes as compete at the Summer Olympic Games.

Swimming, the most popular of the five disciplines, is expected to be held in Marine Messe Fukuoka Hall A, the same venue as swimming at the World Aquatics Championships, and in Fukuoka Nishi Civic Pool.

Solution: have all future WC’s and international meets are in the good ‘ol USA

Or even just one. Baby steps.

Heyyyyy How about this. Seeing the track record of Asian countries canceling these events all over sports and putting a strict bubble in a communist country. How about we just say Asia you can host something in ohhhhh 2025. Get you crap together and then you can host stuff. This is getting ridicules

Meanwhile in the US they’re incapable of hosting even once …

Over to you, Budapest…

Wow.. great.. this will help balance out the schedule…

For someone who keeps offering to host everything, Japan really doesn’t want to host anything