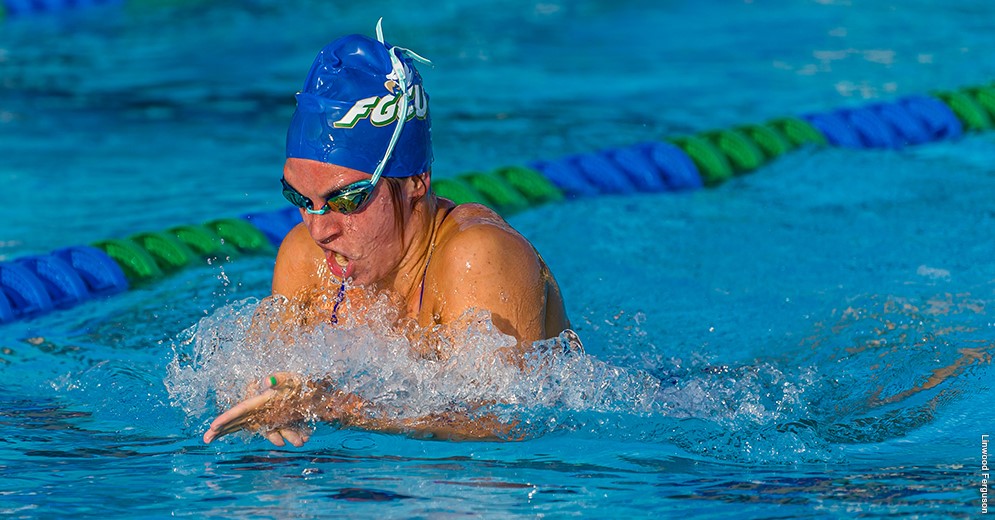 For the first time since 2015, FGCU has started off its season 4-0, picking up wins over Campbell and host Georgia Southern on Saturday. Current photo via FGCU Athletics, Lindwood Ferguson

STATESBORO, Ga. – For the first time since 2015, the FGCU swimming & diving team has started off its season 4-0 after picking up a pair of victories over Campbell (146-94) and host Georgia Southern (172-70) Saturday afternoon at the Recreation Activity Center.

“The team had a very solid day,” said head coach Dave Rollins. “After shaking off some nerves of their first meet, it was great to see the team rise to the occasion of competing on back-to-back days. In addition to the strong swims in the pool, getting to see our freshmen divers compete for the first time brings a great sense of excitement to the season. Congratulations to Reese on winning both boards in her first collegiate meet. Now, we have three weeks before we welcome Vanderbilt to the Nest and we will be ready.”

The Eagles (4-0, 4-0 CCSA) got off to a hot start, grabbing first-place finishes in the opening two events of the meet. The team of freshman Lucija Sulenta (Zagreb, Croatia/Gimnazija I ekonomska skola Benedikta Kotruljevica), junior Petra Halmai, senior Cassidy Fry and freshman Hailey Jerew (Miami, Fla./Cutler Bay Senior HS) edged out Campbell (2-2, 2-2 CCSA) by 0.50 seconds to take the 200-yard medley relay. Freshman Hannah VanDress (Cape Coral, Fla./Bishop Verot HS) followed up with her second victory in the 1000-yard freestyle in as many days.

Senior Liz Zeiger and Fry (Oakwood, Ohio/Oakwood HS) earned back-to-back wins in the 200 IM and the 100 Fly, respectively, to continue the momentum for FGCU. Zeiger (Cumberland, R.I./Homeschool) also tacked on a win in the 500-yard freestyle, dominating the field by a full six seconds.

In their debut for the Green and Blue, freshmen Reese Wakefield and Delaney Nelson took the top two spots in both the 3M and 1M diving events. Wakefield (Guelph, Ontario, Canada/Bishop Macdonelle CHS) won both titles, while Nelson (Cincinnati, Ohio/Ursuline Academy) was the runner-up. A member of the Georgia Southern (0-5, 0-2 CCSA) squad finished third in both events.

Overall, FGCU finished first in eight of the meet’s 13 events.

Up Next
The Eagles will have a few weeks off in preparation for their home opener against Vanderbilt (0-1) on Friday, Oct. 25. The meet at the FGCU Aquatics Complex is set for a 4 p.m. start time and will be a pink out, as the team will be hosting Cancer Awareness Night.

STATESBORO, Ga. — Campbell University swimming split competition with Georgia Southern and Florida Gulf Coast in a tri-meet Saturday afternoon inside the GSU Recreation Activity Center. The Fighting Camels defeated GSU by a score of 139-97 while suffering a 146-94 setback to FGCU.

The Fighting Camels also went one-three in the 100 back as Megan Everritt won the event with a time of 57.87 and Julia Sherlock finished third in 58.75.

The 400-free relay A-squad of Sanchez, Renshaw, Erica Losey and Sarah Wilson collectively swam a 3:32.27 to end the meet with a first-place finish. Campbell’s B-squad of Maddie Heggie, Lauren Shoemaker, Sherlock and Everritt took third with a combined time of 3:38.88.

The Fighting Camels opened the day’s competition with a second-place finish in the 200-medley relay as Everritt, Greco, Baiotto and Wilson posted a cumulative time of 1:47.86.

Campbell returns to Buies Creek to host Liberty in the Johnson Aquatic Center home opener on Friday, Oct. 11 at 5 p.m. The next day, Oct. 12, Campbell hosts UNC Asheville for an 11 a.m. dual meet.

Georgia Southern Swimming and Diving lost 97-139 to Campbell and 70-172 to Florida Gulf Coast on Saturday.

Melissa Cox had the only first-place finish of the meet for the Eagles in the 50 Free. She finished in 23.99 seconds.

“It was great to race at home this weekend,” Head Coach Amanda Caldwell said. “Our women made either some good technical adjustments or were stronger in front half of their races compared to last week.  We still have lots of room to grow before the end of the season, and I believe our team is up for that challenge. ”

The next meet of the season will be at North Florida on October 19.