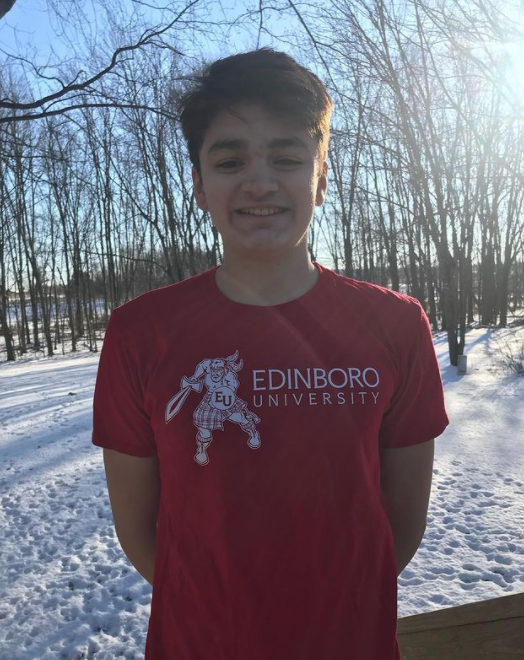 Already faster than the school's record in the 1650, Dylan Cossin will make the short drive to swim for Edinboro University this fall.

Dylan Cossin has announced he will be traveling just 100 miles up the Lake Erie coast in the fall, committing to swim at Edinboro University. Cossin is from Hudson, Ohio, where he swims for the Firestone Akron Swim Team and Stow Munroe Falls High School.

A distance freestyle specialist, Cossin swam four events at the 2021 Speedo Sectionals in Indianapolis. His top finish came in the 1500 free, where he finished with the 14th fastest time (17.34.85). He also added a 41st place finish in the 400 free, touching in 4:22.85. Just over a month later while racing at the LESD Busbey Invitational, he shaved four seconds off of his time in the 400 to touch in 4:18.94.

In the short course yards pool, he competed at the OHSAA State Championship meet for Division 1 schools. There, he took 21st in the 500 free in a time of 4:44.87. A week later he finished in second in the 500 at the Lake Erie Senior Championships, touching in 4:38.77.

Edinboro is coming off of a season that saw them take 6th at the 2021 PSAC Championships. While the conference still held a conference-wide competition to conclude the season, it was missing one of the Pennsylvania State Athletic Conference’s winningest teams. West Chester University, who’s men have won the conference title for 22 consecutive years, did not compete at the meet due to Covid-19.

Despite West Chester’s absence, Cossin would have made a huge impact on Edinboro’s distance group at the meet. He would have taken 2nd in the 1000 and 500, and would have had the top time in the 1650 with his best times. When he joins the team this fall he will already have been faster than the school record in the 1650, as well as be ranked in the top-5 of the 500 free.