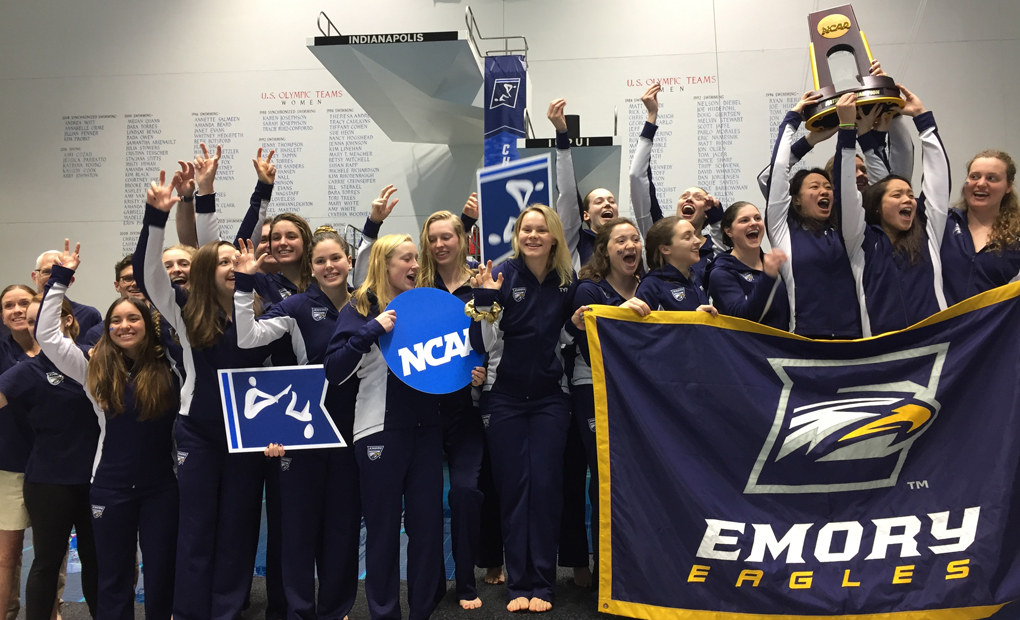 The D3 psych sheets are out, and the meet is fast approaching. It's time to get an idea of which teams are well positioned to take the title. Current photo via Emory Athletics

After winning the 100 breaststroke last night, Denison’s KT Kustriz will compete in the 200 breast today to go for the stroke sweep.

New York University’s Honroe Collins will look for her third individual title of these championships in the 200 fly, where she’s seeded 6th after the preliminary heats.

The D3 psych sheets are out, and the meet is fast approaching. It’s time to get an idea of which teams are well positioned to take the title.

The 9 time defending champion Emory women are well positioned to take their 10th straight title with 474.5 seeded swimming points (diving is not seeded on the psych sheets). NCAC rivals Kenyon and Denison are both within striking distance of Emory. Kenyon have 441 seeded points and Denison have 395.5.

Diving, which isn’t included on the psych sheet should help the Ohio teams. Dension have two divers in the meet including Alison Fitzgerald who scored 25 points last year, and Kenyon have 1 diver in. Emory qualified no divers.

Kenyon’s Crile Hart is the only swimmer with 3 top seeds. Fiona Muir of Emory is next best with 57 seeded individual points. Emory will be looking to win on the back of their superior depth. The Eagles have 30 swimmers seeded in the top 16 compared to only 24 for Kenyon and 20 for Denison.

In opposition to that trend, St Kate’s, a school that hasn’t had a non diver score at nationals since at least 1992, is seeded 6th on the back of almost entirely freshmen. All 99 of their seeded individual points are from freshmen, including the top 2 freshmen at the meet by seeded points (Jordan Wentzel with 51, and Maggie Menso with 44).

That is a substantial lead for the defending champions, but not unbridgeable. Kenyon and Denison both have 29 swimmers seeded in the top 16. That means Kenyon have the depth to match if they can just move up on the higher seeded Denison swimmers. Neither top men’s team got any divers in, so that won’t be a factor.

This meet is even more dominated by older swimmers than the women’s meet. Freshmen are seeded to score 344.5 points. Sophomore’s are seeded with 421, juniors 654, and seniors 595.5.

No one has three top seeds. Matthew Hedman of Denison is the closest with 57 seeded individual points. Robert Wang of Denison is next best with 51, matched by Collin Miller of UW-Eau Claire with 51.

Good catch. Messed up when I copied the list. Should be complete now.

What about Jack Bauer – I think the psych shows him a top seed in one event and top 10 in another. I think he’s missing from your men’s list