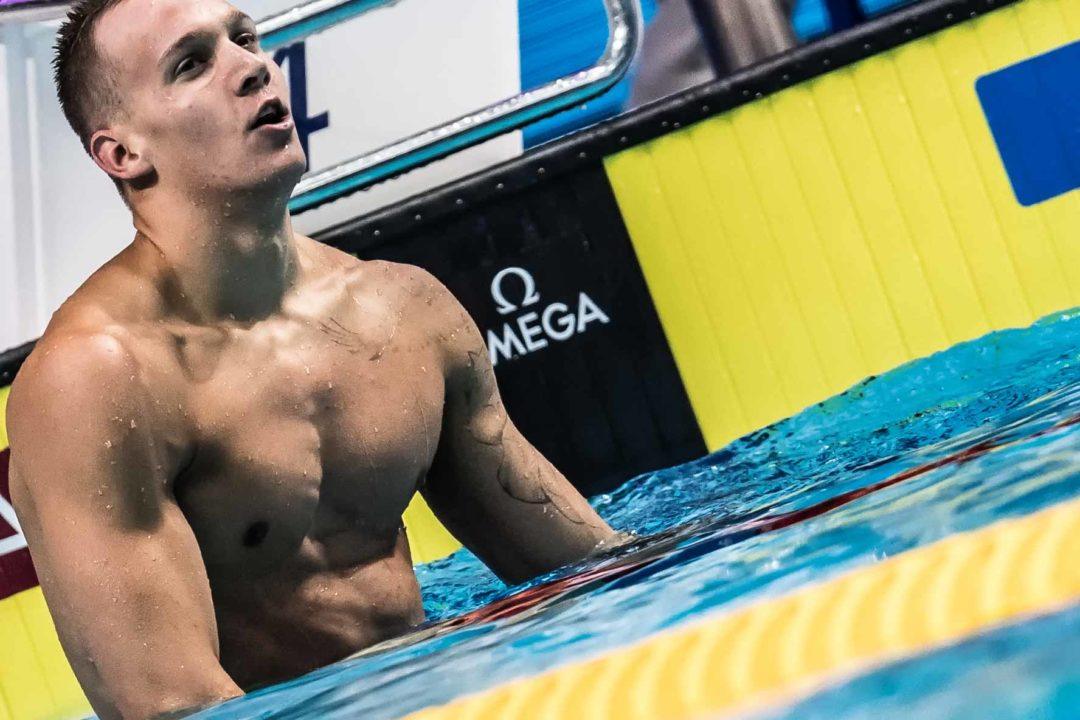 In the first short course metres race of his career, Caeleb Dressel broke the American Record in the 100 freestyle leading off the U.S. team in the 400 free relay, recording a time of 45.66. The team went on to win gold and break the world record in 3:03.03, as Dressel was joined by teammates Blake Pieroni, Michael Chadwick and Ryan Held.

Held had set the American Record leading off the prelim relay in 45.82, which was also his first ever SCM race. That swim broke the 46.25 mark set by Ian Crocker in 2004, and Pieroni had tied that time in October on one of the World Cup stops.

It’s important to note that Nathan Adrian has been faster, leading off the 400 free relay at the 2009 Duel in the Pool in 45.08 (and going 45.42 individually), but those swims were done in the period where USA Swimming had stopped recognizing American Records done with the rubber suits, so the 45.08 was never officially an American Record. That 45.08 was the opening leg of the old world record in the 400 free relay as well.

Dressel now owns all three American Records in the 100 freestyle, adding short course metres to the SCY and LCM records that he already had. He first broke the yards record in February of 2016 in 41.07, and has consistently been lowering it down to where it is now (39.90), and he cracked the long course record a few times at last summer’s World Championships with his fastest swim being 47.17. By our research, he is the first American man to hold all three 100 free records simultaneously.

In the historical rankings, Dressel now sits 11th all-time in the event.

Alright, when are we going to start saying he is the king of American Sprints? Nathan has never done that. Dressel is also starting to get back to where he was during 2017 Worlds which is scary to think about. Not downplaying Nathan, but the torch has been passed since 2017. Move on people

I wouldn’t say Caleb is back to that form just yet, and the reason we call Nathan the king is because he had been so consistent for so long. Caleb hasn’t had enough time or really been consistent enough in long course at least.

Adrian has an Olympic 100 free title.

So does King Kyle and until 2020 he is the king, end of story

Long may he reign King Kyle.

Ervin is going to be my sprint king until someone wins individual Olympic gold 16 year after his first.

Someone still has to break Popov dominium on 50/100…

You can’t become King till you win an Olympic Gold…

i thought it was ryan held to break the record

Ryan Held broke it in prelims, Dressel broke his record in finals.

Considering that Chalmers swam faster and this is SC, I can’t imagine Dressel’s swim being more than a 48.1-48.3 LC effort.

Yes, this is true. Only blinded Dressel/US fans would think this was a phenomenal swim…It wasn’t bad of course but he should be able to go maybe even a sec faster assuming he is better than Morozov in short course which he should be even if not by much.

There are 3 kinds of pools, in 2 of them – LCM and SCY – he clearly is better. 1 of those pools also highly correlates with SCM – yards is like what 1-2 strokes shorter than SCM per length. Anyways, I didn’t say he is better, all I said he should be better. I share the opinion that this Dressel is nowhere near the Dressel that swam in Budapest last year.

Shouldn’t being better than Morozov at SCY and LCM mean he would be better at SCM?

Unless Caeleb goes 43 secs most people will see it as a failure!

He swims yards though!

most definitely… Peak Dressel would probably be a good second or second and a half faster. Not in top form? Not fully rested? Just a bumpy swim (I heard his turns were poor)? We’ll see what the rest of the week holds. Of course you have to keep things in perspective; no one can be in peak form every time out.

It’s worth noting, that Dressel is historically a so-so relay swimmer. I agree with you that 45.66 is a far cry from 39 high (and I doubt he’s in that form right now), but I’m going to hold out for the 100 free to make a judgement. First scm swim, first swim of the meet (from a swimmer who tends to get better as meets go on), and a so-so relay swimmer…I’d say 45.6 is about what I would expect.

I would only refer to him as a “so-so relay swimmer” when comparing his relay splits to his individual times. His flat starts are just so powerful and so quick on their own. Usually a relay start gives that extra momentum, which in theory should lead to a relatively faster split. In the case of 2018 NCAA’s I was crazy excited for Dressel’s relay swims after his individual 50/100 frees because I wanted to see how a relay start would add to a 17.6/39.9, but there was little-to-no-difference in times. That’s how I interpret “so-so relay swimmer.” Only when compared to his own times.

To add in a couple 2017 ncaa 4×100 – 40.48 lead off, versus 40.0 individual 2016 ncaa 4×100 – 40.86 lead off, versus 40.46 individual What I see is a swimmer who, when leading off, is consistently slower than his in race times. Let’s not overlook that the 50 you mention above was a .18 hundredth difference, which is a huge chunk of time in a 50. And while you can say the flying start vs. flat start is a different issue, I’m not sure that it actually is when talking about one’s ability as a relay swimmer. There are a fair number of flying start swims that were significantly slower than his flat start times (his 100 breast at… Read more »

is he considered just a so-so relay swimmer? the result of 2018 NCAA (http://www.swmeets.com/Realtime/NCAA/2018/) did not seem to agree especially considered how some of the relay swim is his 3rd swim of a session or 6th swim of the day.

So much hate in this thread for a guy who broke an AR in his first ever SCM swim.

This. It’s his first swim of the meet. His first SCM in a while. Can we not knock him down yet?

He also typically gets better as a meet goes on.

Seriously what is wrong with you people?

Kyle went same time with his poor start, turns and underwaters. Dont think he’s tapered for those world cup circuit races.
So this is not the top form Caleb we saw in Budapest. But still expects some fast swims from in next few days. Possibly 45.3 or 45.4 on individual 100 free.