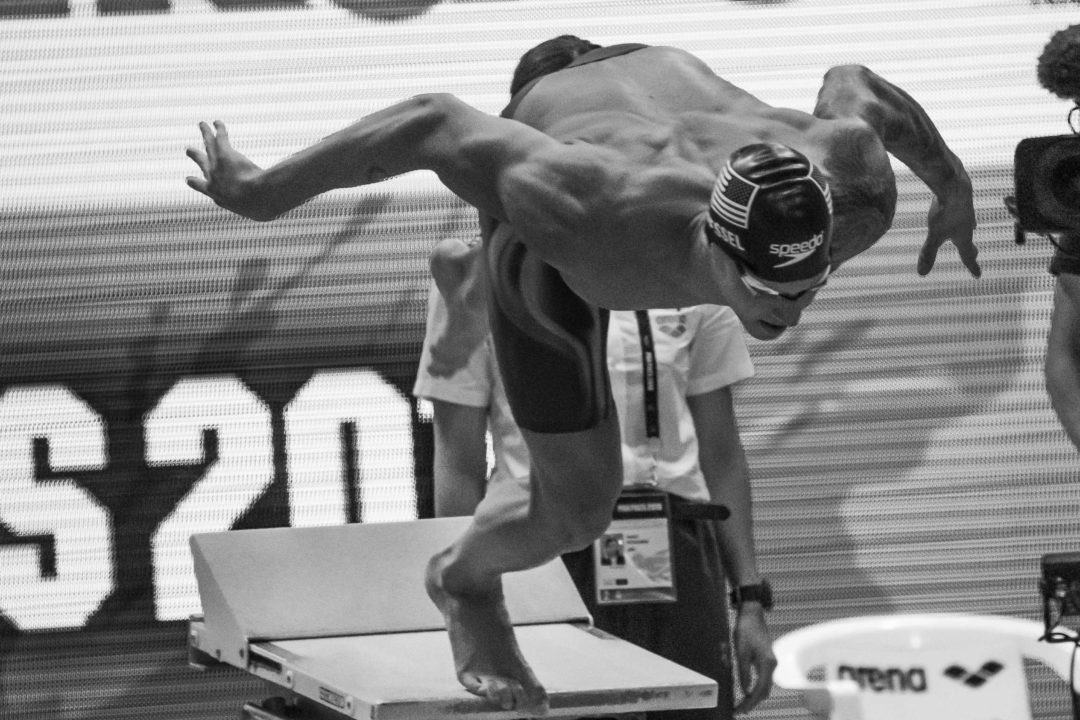 Caeleb Dressel led the U.S. off in an American Record and they broke the world record in the 400 free relay. Archive photo via Mike Lewis/Ola Vista Photography

The American quartet of Caeleb Dressel, Blake Pieroni, Michael Chadwick and Ryan Held came together to win the men’s 400 free relay at the Short Course World Championships in a new world record time of 3:03.03, breaking the previous mark of 3:03.30 set by the U.S. at the 2009 Duel in the Pool. That team was made up of Nathan Adrian, Matt Grevers, Garrett Weber-Gale and Michael Phelps.

Dressel led them off in 45.66, breaking Held’s American Record* of 45.82 set leading off the prelim team, and then Pieroni (45.75), Chadwick (45.86) and Held (45.76) all held up their end of the bargain as they narrowly edged out the Russians who were also under the old world record in 3:03.11. All four Americans were well under what the American Record had stood at before Held broke it this morning (46.25).

*Editor’s Note: Nathan Adrian swam a 45.08 in December of 2009 at the Duel in the Pool, one of the world’s last meets where the now-outlawed rubber suits were allowed. USA Swimming, however, had already barred their use earlier that year. This means that while American swims in rubber suits at Duel in the Pool could break World Records, they were not eligible for American Records.

Check out a split comparison of the new and old world records below:

Dressel, Pieroni, Chadwick and Held are all recently removed from their collegiate careers in the NCAA where they raced short course yards, so it’s not a surprise to see them find instant success in SCM. All-time, Dressel is 1st, Chadwick 2nd, Held 3rd and Pieroni 6th among Americans in the yards version of the 100 freestyle.

Is this one of Greg Troy’s half tapers or is this what we’re gonna get from Dressel from now on?

Dude 45.6 is pretty fricking legit, matter fact no american has ever been this fast. You guys hold this man to impossible standards. He can’t beat super suited legendary records everytime he jumps in the pool 😒

Yes, 45.66 is fast, but given the above and what we’ve seen out of Morozov previously, i’m not overwhelmed. Being the best scy swimmer ever brings expectations.

ever think that Ryan Held is just that legit now too?

I think we all saw how refreshingly down to earth Ryan Held is on the gold medal podium at the last Olympics. As someone who knows his family well he is every bit of the eagle scout that he earned in his youth.

This was a good swim but nothing earth shattering. It’s okay to admit the reality of things. He’s the best scy swimmer ever and Morozov and Chalmers have already been faster this year. I’m rooting for him, but it is what it is.

He was swimming three days a week in the early fall, and just recently ramped up to 5 days a week. Sometimes less is more.

historically average relay swimmer swims 45.6…is this the best he can do? Maybe it is, but discounting the fact that pretty much every relay swim he does is significantly slower than his flat start times is silly.

Significantly slower? he usually is within a tenth or two of his flat start times on relays…Look at ncaas, worlds, secs, etc

I’m sure Dressel is losing sleep over on account of your lack of being “overwhelmed.”

hes faster than vlad in scy and lcm who went a 44 a few weeks ago, seems reasonable to seem him at least under 45.0

are we complaining about american records now?

In the end, he may just turn out to be a slightly better Vlad, albeit with fewer World titles but some relay Olympic golds, and not the new GOAT as we hope. He’s not a given in anything anymore. LeClos looks sharp here, so the 100 fly is not a gimme. 50 free is wide open. He looked tired at the end of this, so 100 free is not a gimme. I don’t buy the Troy half-tapering him or saving him for Tokyo. Lochte, when he was with Troy, was insane at SC and LC Worlds in off years.

Dressel needs a longer taper than Lochte, that’s what I’ve learned from the last couple years. I think y’all are overreacting a bit, he’ll be fine this summer

Well, he better start tapering for 2020 OTs then.

Seriously, what’s the point of showing up at WCs for Team USA, if you’ve never tried it — ever (which I doubt, the ever comment). It’s not like he’s a full-time student anymore and couldn’t drop in for a World Cup meet or even a masters SCM meet. For that matter, it’s not like the other guys (like Held, Grevers, Murphy, who are swimming well) have some amazing motor memory to remember how exactly they swam in SCM years ago. We’re now, what, nearly 18 months since Dressel was what we thought he’d be?

Terrible turns for dressel cost him the individual WR…

Also I dont understand how could russia not use Rylov who swam so good in the morning.

Well, he gets a couple more chances then 🙂