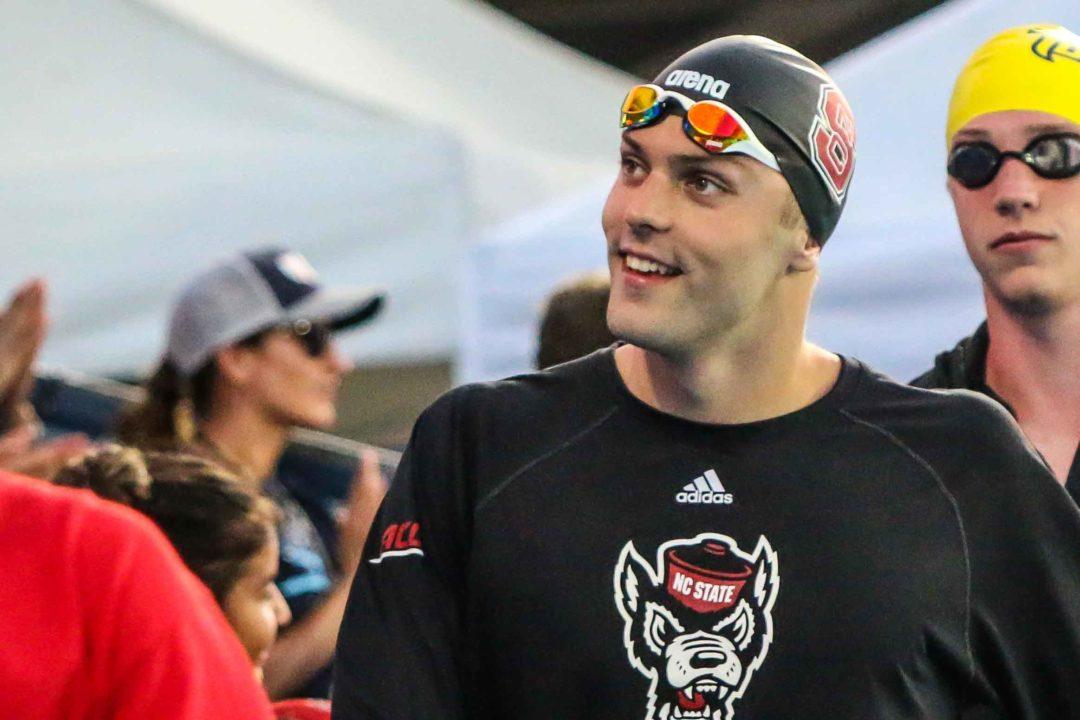 Swimming the first short course metres race of his career, American Ryan Held unleashed a massive 45.82 on the lead-off leg of the men’s 4×100 free relay during day 1 prelim action at the SC World Championships in Hangzhou, breaking the existing American Record by over four-tenths of a second.

His swim breaks the previous mark of 46.25 held jointly by Blake Pieroni and Ian Crocker. Crocker set the record back in 2004 at the NCAA Championships (they used to be raced in metres during Olympic years), and then Pieroni tied the mark in October.

It’s important to note that American sprinting legend Nathan Adrian has been faster than Held’s swim, as he led off the 4×100 free relay at the 2009 Duel in the Pool in 45.08. However, at that point in time USA Swimming had stopped recognizing swims done with the ‘super’ suits as official American Records, so Adrian’s swim (and any other swim from that meet) were not recognized officially as an American Record.

Held was the only lead-off swimmer in the field to crack 46 seconds, and only Breno Correia (45.32) of Brazil split under 46 with a takeover. The swim makes Held the 17th fastest performer of all-time.

Despite never racing SCM before, Held finding instant success here is no surprise. He consistently performed well throughout his collegiate career with NC State swimming short course yards, and currently ranks as the 2nd fastest American ever in the SCY 50 (18.56) and the 3rd fastest ever in the SCY 100 (41.08).

Heading to the final, Held will probably be the only swimmer to remain on the American relay, as he’ll likely be joined by Pieroni, and the two fastest Americans ever in the SCY 100: Caeleb Dressel and Michael Chadwick. They’ll definitely have a shot at the world record.

Will be interesting to see the order of the teams. Dressel usually leads off and it would be good to have clean water.

Wonder where Russia will swim Vlad

Dressel and guys/girls like Held/Baker swimming SCM is such unchartered territory. Interesting to see how they do

Dressel should always lead off so he can utilize his start, which is the best start in the world IMO.

Yeah he’s not much faster on a flying start compared to his individual unlike other swimmers. I feel like vlad will lead off so he has another shot to go for the WR at this meet.

Dressel is always better as lead off, unless it’s a medley relay. Dressel vs Vlad would be 🔥