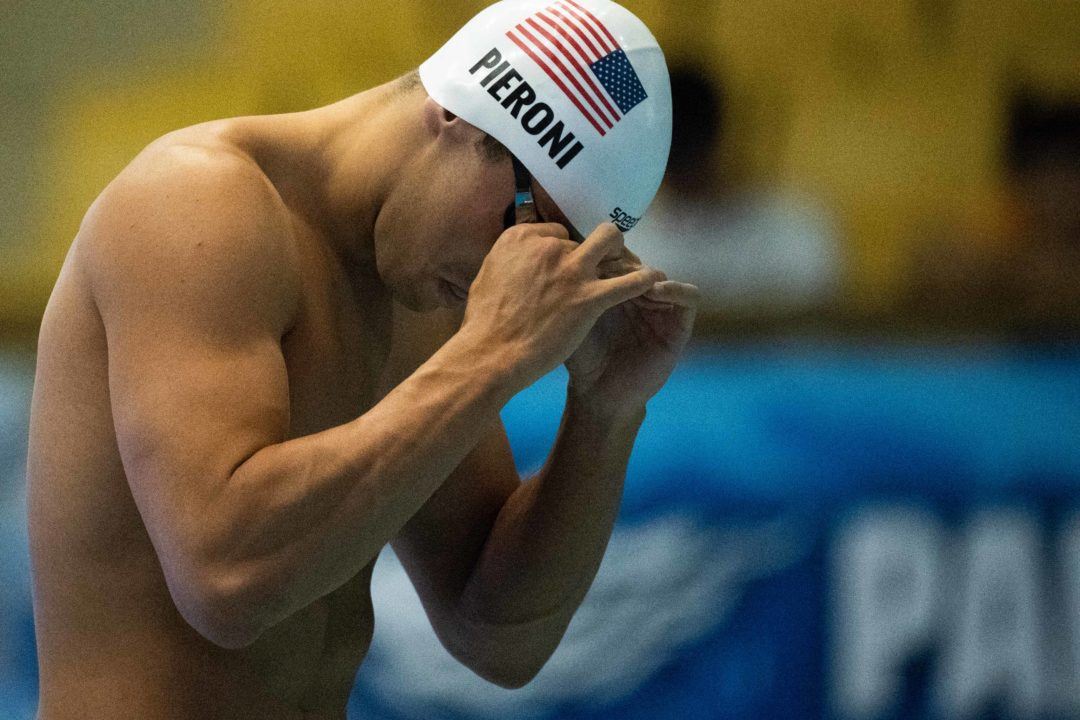 Blake Pieroni tied Ian Crocker's 2004 American Record in the men's SCM 100 freestyle in a time of 46.25 at the FINA World Cup in Budapest. Archive photo via Mike Lewis/Ola Vista Photography

Blake Pieroni has been on a tear on the 2018 FINA World Cup circuit, and that didn’t change on the 2nd day from Budapest as he threw down a time of 46.25 in the men’s 100 freestyle final, tying the SCM American Record set by Ian Crocker back in 2004 at the NCAA Championships in East Meadow.

Prior to the first short course metres stop of the World Cup circuit last week in Eindhoven, Pieroni did have some SCM experience under his belt from the 2016 World Championships in Windsor, where he had established a personal best time of 46.70 in the 100 free semi-finals before finishing 4th in the final.

In Eindhoven, he dropped that PB down to 46.45 as he placed 2nd to Russia’s Vlad Morozov. Here in Budapest he took off two more tenths to tie Crocker’s record right on the nose, with Morozov also improving from 45.69 to 45.30 to fall just .07 shy of his own National Record.

This swim gives Pieroni, who is a 2016 Olympic gold medalist, his first American Record in either short course or long course metres. Earlier this year he had set the American Record in the SCY 200 freestyle only to have it snatched away by Townley Haas at the NCAA Championships.

The runner-up in the 400 freestyle on day 1 in Budapest, the Indiana grad will swim the 200 on day 3 and look to repeat as the winner after topping the field in Eindhoven in 1:41.83. The American Record in that event currently stands at 1:41.08 from Ryan Lochte at the 2010 Short Course Worlds in Dubai.

Note: Nathan Adrian swam a 45.08 on the leadoff of the American 400 free relay (the relay is still a World Record) at the 2009 Duel in the Pool. In December of 2009, FINA was still accepting polyurethane-suited swims as World Records, but USA Swimming wasn’t accepting them as American Records. That makes Adrian’s swim of 45.08 the fastest flat-start by an American, but not an official American Record.

Not to dimish this, but the U.S dosen’t recognize national records set in late 2009, therefore Adrian’s 45.08 from the 2009 duel in the pool is the unoffical american record.

Didn’t Nathan Adrian go 45.08 on the leadoff of the 4×100 free relay at the 2009 Duel in the Pool? I don’t see the result on the USA swimming website but it still shows up on the splits for that world record that are on Omega Timing.

This was in the gap period where FINA was still recognizing World Records and allowing the suits, but USA Swimming does not. There aren’t many of those records left, but this is one.

So, it’s not officially an AR, though it’s the fastest ever swum by an American.

WR? You meant AR i assume?

Used to happen in Olympic years.