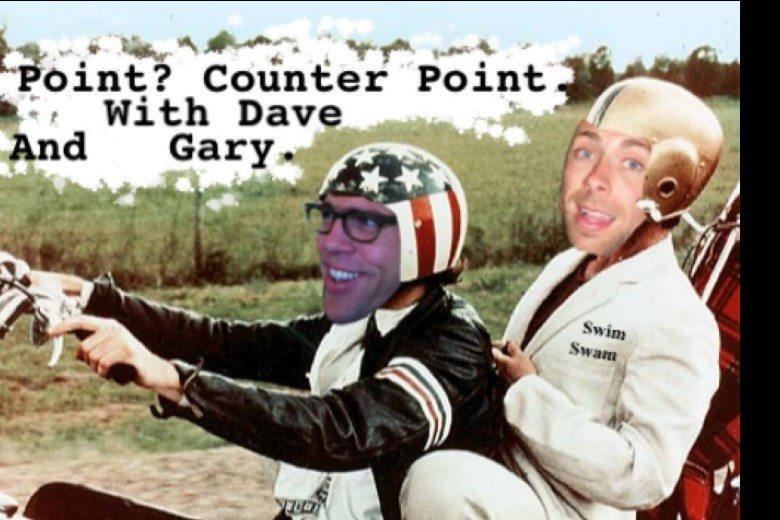 Dear Alex, Thanks for showing up this time. Sincerely, Gary and David

David: So, just like Sylvester Stallone post-Human Growth Hormone, we’re back and UGLIER than sin.

Gary: That is ugly. Check this out! Gary: They could be brothers! Rocky’s going to star in Mask 2. And get a load of this one!

Gary: The open water desperado? You showed up?! Awesome!!! Alex, thank you so much for joining Barney and I on our column today.

Alex: Hey guys, thanks for having me back on the column. You actually did have the right email last week, the messages were going to me, I just didn’t find anything you guys were saying to be very interesting. Especially Gary. He is dum.

Gary (staring at squirrels playing outside his window): …

Gary (annoyed by the squirrels behavior): So, tell us how you are going to challenge the entire world at the Olympics.

Alex: I’m not surprised he doesn’t know that other swimming events besides the 50 actually exist. David, isn’t it so frustrating trying to hold a conversation with a person that didn’t go to Harvard?

David: You have no idea. Alex, I don’t think that he realizes that you go to the Olympics, but that the U.S. pool team will also go…they just haven’t had Trials yet.

Alex: I’m not really enjoying this.

David: Nobody enjoys this. Anyway, Alex. Jokes aside, I have a man crush on you, for obvious reasons. But back before I blew the last interview, I was asking your thoughts on the balance between success in and out of the pool. Do kids have to make choices (i.e., great school or great swimming school), or can they have it all?

Gary: I wonder how he wants you to answer this.

Alex: The college experience is really what you decide to make of it, and as the cliche goes, you get out what you put in. There are plenty of fine institutions of higher learning that have great teams, great coaches, or both. While Harvard hasn’t had a notable team performance at NCAAs in a few years, I believe that Tim Murphy is one of the greatest coaches in the world and anyone that believes in the program and works hard will have success there.

Gary: A fine, and expected, answer. Go team USA? You wanna throw that in there too?

David: Amen, Alex.  Do you think you would have been better if you hadn’t gone to Harvard?

Go ahead, Alex. Is distance swimming better than sprinting, by the difference of gold?

Alex: Well, first of all, Chuck Norris has probably already come to your house and delivered a swift roundhouse kick to your “nicely shaped cranium” for even thinking of comparing yourself to him, so if you’re not still knocked out cold on the floor and will actually be receiving this message, here is my answer: I’m proud that I do real sets, I’m proud of the guts that it takes to swim distance events, I’m proud that my best event is 200 times the length of yours, and I’m proud to be a distance swimmer.

David: That’s not really how this works Alex.

Gary:  Yeah, we’re the ones asking the questions around here. Do we come to your underwater office and pull on your feet for 25K? Or kick you in the goggle socket? Even if I could keep up with your swimming, I don’t think I would punch you in the ribs. Even if you did go to Harvard.

Wait!!! I have an idea. Let me answer the question first, and then you guys can try to figure out the question.

Alex: Yeah, I’m going to have to second that. No.

Gary: What does open water offer the swimming community that the pool can’t provide? Here’s your chance to contribute to the column, Alex. Don’t screw it up.

Alex: There are so many underlying tactics and strategic moves going on in an open water race that often go unnoticed and under-appreciated by the casual viewer. But these subtle nuances are what makes the open water events so exciting, ever-changing, and dramatic to watch. For anyone who enjoys watching cycling, you would enjoy watching the Olympic open water 10k for very similar reasons. And besides the competitive aspect, I think more people can relate to swimming in a natural body of water than swimming in a pool. So there’s that.

Gary: I understand. Between the 2000 Olympics and 2008 I did easily over 60% of my swimming in the Atlantic ocean. That’s the truth. Not enduring the monotony of the pool extended the length of my swimming career, and made me a better swimmer. And sprinter.

Hearing you describe the tactics of open water swimming is inspiring. You’re good at it. Have you ever considered giving up your career as an open water swimmer to pursue open water commentary? What about post swimming career? Is coaching or swim-related work (or any work for that matter) below someone with a degree from Harvard?

Open water swimming is growing in popularity due in no small part to articulate role models, such as yourself, that evangelize the benefits and excitement of the sport. Whether you choose to pursue a continuing role in the sport or not, know that the contributions you’ve made to the growth of open water swimming are appreciated. Even by sprinters. That didn’t attend Harvard. Now answer the question.

Alex: [I] Haven’t considered commentary other than dreaming that Phil Liggett (the voice of the Tour de France) will some day provide [commentary] during one of my races. If the opportunity arose, I would gladly be his co-commentator. I do believe that accurate, insightful, and exciting commentary is essential to making open water attractive to otherwise non-fans, helping to grow and promote the sport. Most people look at an open water race and see a bunch of people swimming in a big group (booooring), when there’s really much more going on!

David: I volunteer Gary for the London commentary.

Gary: I’ll commentate the hell out of that open water swim.

Alex: I imagine I’ll swim until 2016 or so or as long as I still love doing it and can make a reasonable living… time will tell. I honestly have no idea what I’ll do after swimming. I’d like to stay involved in swimming or athletics at least is some way, however loosely it may end up being…even if that means just participating in an annual Dave n’ Gary column!

Gary: Alex, you might have picked up on it by now, given that Harvard intuition of yours, but Dingleberry Dave and I like to joke around a bit. Except when it comes to swim coaches. Anyway, we both think that you’re great and want to express our sincere appreciation for joining us on our less than bronze medal column. We wish you nothing but the very best in London and are confident enough to place bets that you’ll represent all of us in the United States, sprinters and open water maniacs alike, with class and integrity. You make us proud.

Now get out there and kick some Thames!

Great interview, although “Kick some Serpentine” would be the more appropriate send off. Hope your doing well Dave, great to have your writing again.

Can I just say that I love point, counter point?