Dave and Gary…Talk About Stuff 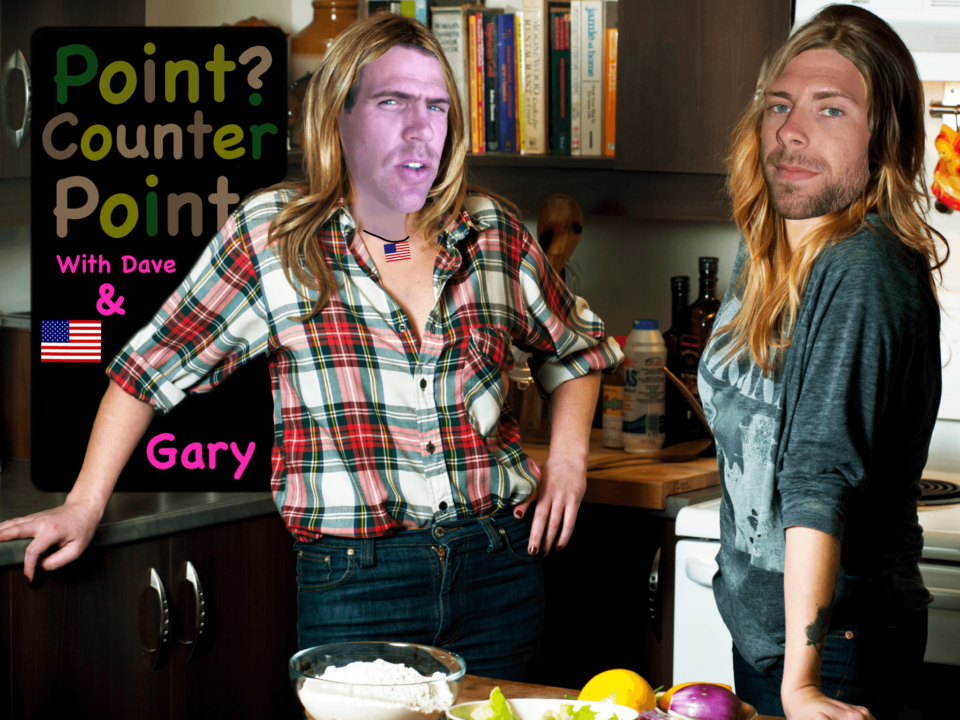 Gary: Great news, Fig Nuts! The pentagon has abandoned their “Don’t Ask, Don’t Tell” policy for women in uniform! This is a proud day for America.

David: That’s not what it’s…huh.

David: No, sorry, that was a statement, not a question.

David: I’m not getting into this. You’re not going to soil it…

Gary: Really? Because you have enough soil in your underpants to fertilize a football field. Fig Nuts!

Um, anyway,  let’s talk about Jason Lezak’s retirement from swimming. And what it must be like to be a high schooler that has to compete against Missy Franklin. Two profound topics, worthy of our detailed, in-depth analysis. I wanna start with the social consequences of…

Gary (distracted by the thought of being a high school girl that has to compete against Missy Franklin): In the words of Frank Drebin, “What I wouldn’t give to be twenty years younger… And a woman!” If only I should be so lucky, (trailing off) I’d prefer to serve on the front lines than race Missy Franklin…

David: Sell crazy someplace else lady. But point taken, little high-brow for you, I’ll dumb it down for my audience…

David (clears throat and starts talking like a primate): Why you talk Lezak? He no like you no like him no. It I read so true.

Gary: A professional relay swimmer! An accurate prediction cast by the oracle, myself. It was a compliment! I never understood why he got so defensive over that. Four years later in Beijing Jason Lezak proved what I already knew to be true, that being a “professional relay swimmer” was badass. I was there in the audience for that relay, cheering my voice out. Epic!

Gary: You know, you shouldn’t read everything you read in the newspapers. In real life I’m a sweetheart, an enthusiastic practitioner of social niceties and purveyor of opinions on performance art and politics. Fig Nuts!

Gary (frowning): That’s my robe. And you smell like cat urine. Anyway, if you refuse to celebrate an American hero, then I will…

Gary (commences to pour out some malt liquor): …

David (breaking character): Speaking of American heroes, Pauline Phillips! I loved her; she had the best scam of them all: advice columns? It’s like the thinking man’s plog.

David: NO! But I Sharpie’ed it on a stall that gets a ton of traffic. Anyway, who’s Lezak going to write for advice post-retirement? Who’s Missy Franklin going to write to for advice on how to avoid hanging out with people like us? What about Ryan Lochte?

David and Gary (laugh simultaneously at the thought)

Gary (raising back of wrist to forehead): And I have to race Missy Franklin in my high school swimming meet!

You are “Abby,” the undead, wrinkled shrew, giver of words and advice. I seek advice, a supplicant wan for approval. Hungry for knowledge. Eager to appease. And please. Again. And again…

PS- I think I might be a man trapped inside a woman’s body! Do you think I should be able to serve on the front lines?

PPS- If we pumped Missy Franklin full of every performance enhancing substance known to exist, and loads of it, could she swim faster than Ryan Lochte?

Though I admit your problems are somewhere in between those two events, objectively, they inch closer to the former side of the spectrum.

The chance to even see Missy Franklin race in person is worth more than her gold medals. So take your ego, stuff it in your locker next to your copy of Fifty Shades of Grey, and try and learn something out there.

Gary (listening to this sound): …

Gary (yawning): That was brilliant!

David: …really? Are you just saying that?

Gary: Yes, that was the worst advice ever. You suck fig nuts. Those are good questions that I asked!

David: Okay Tonto, why don’t you give it a shot?

If Missy Franklin were on all performance enhancing drugs known to exist she’d have the strength of 50 gorillas. Ryan Lochte has the intelligence of 50 gorillas. In a swim race between the two, Missy would spank Ryan like Marv Albert spanks prostitutes. Or like you spank fig nuts, Fig Nuts!

David: Aren’t we (translation: you) too hard on Ryan Lochte?

Gary: When Michael Phelps looks like the smart one… (long exhale). Let’s just say the favorite knife is rarely the sharpest.