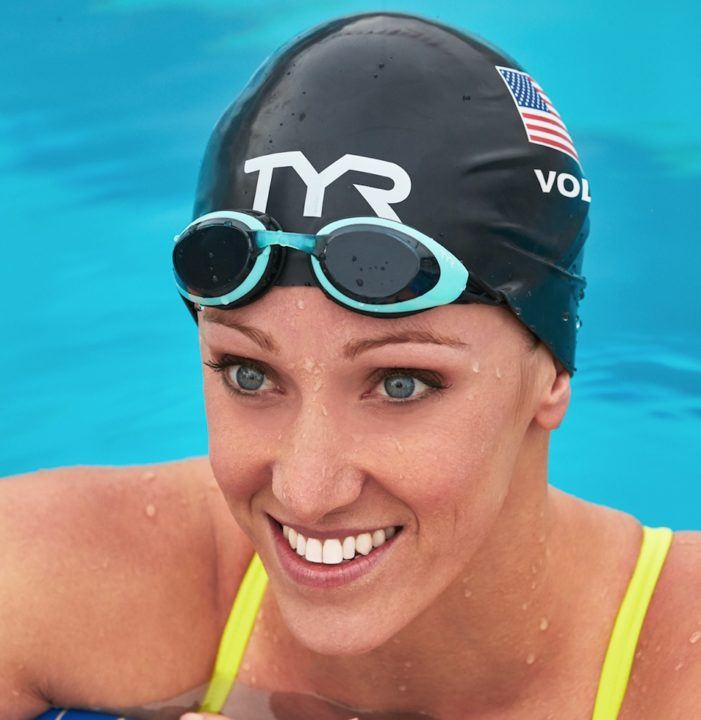 Vollmer’s last competitive race was in April of 2017 at the Arena Pro Swim Mesa, where she raced at 26 weeks pregnant (she swam a 27.59).

After giving birth to her first child, Arlen, in March of 2015, Vollmer returned in just 4 months for the Los Angeles Invite. A year after that, she came away with 3 Olympic medals in Rio – gold on the 400 medley relay, silver on the 400 free relay, and bronze in the 100 fly.

Vollmer says that she’ll swim the 50 free and 50 fly in Austin (psych sheets have not yet been released). In a Tweet announcing her return, Vollmer says that she was “feeling speedy.” Both of her races will be swum on Saturday, January 13th as part of the new series format that will have standard event lineups on Thursday/Friday, with a more unique

In spite of being out of competition for 8 months, Vollmer’s fellow Olympian Jason Lezak still drafted her as part of the new team-style U.S. Swim Squads Fantasy Draft, meaning that she will be eligible to score points for her team. Other members of Lezak’s team include Nathan Adrian, Lia Neal, Kathleen Baker, and Mallory Comerford – as well as a breaststroke-heavy trio of Josh Prenot, Kevin Cordes, and Cody Miller (perhaps setting up for a trade later on to another team?).

20
0
Reply
Caeleb Dressel Will Get 7 golds in Tokyo

Wish her the best!