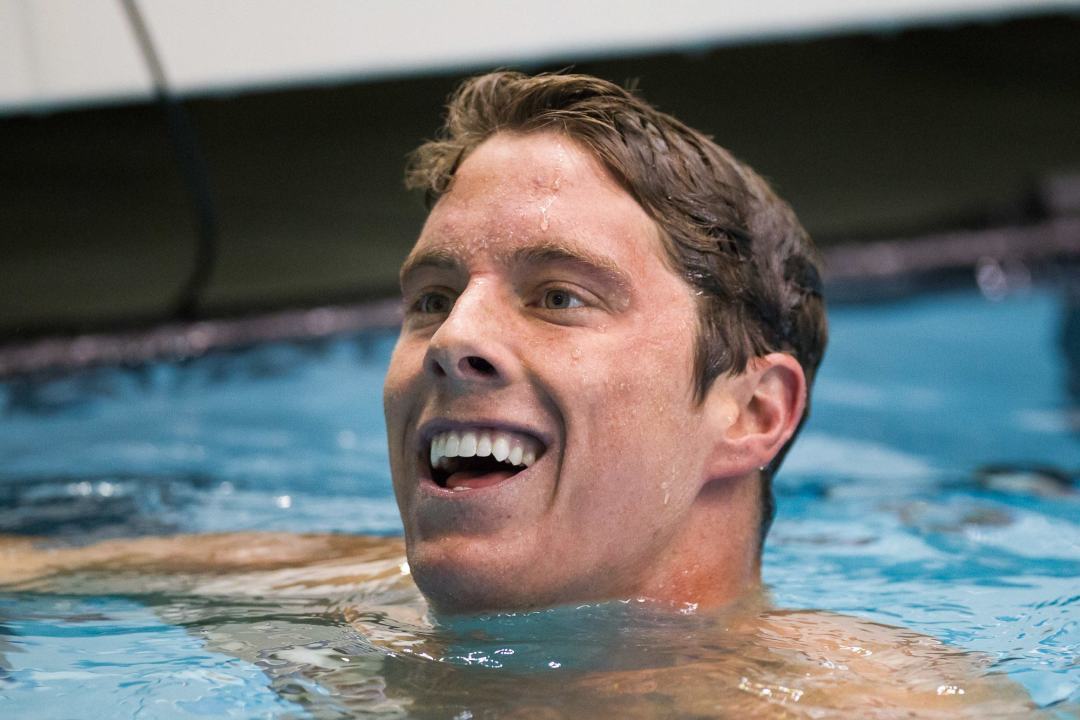 U.S. Olympic gold medalist Conor Dwyer is competing in Austin under a new banner after representing North Baltimore Aquatic Club for all of 2014. Archive photo via Tim Binning/TheSwimPictures.com

U.S. Olympic gold medalist Conor Dwyer is competing in Austin under a new banner after representing North Baltimore Aquatic Club for all of 2014.

It’s been long rumored that Dwyer has been training in Los Angeles with USC’s Club Trojan (and Dwyer’s Twitter account had seemed to indicate as much), but the Olympian hadn’t publicly made any announcements about his training home or club representation, nor responded to any requests for verification on the subject.

But Dwyer officially showed up to the Arena Pro Swim Series at Austin swimming for “Unattached-Trojan,” the first time he hasn’t represented North Baltimore since the summer of 2013.

Dwyer swam the 100 free and 400 free this morning, making the A final of both. He’ll be in the hunt for the win in the 400, where he’s seeded second, and is seventh in a loaded 100 free field where it appears many of the veterans (Dwyer included) were saving something for the finals.

You can read our full prelims recap here.

Interesting.
So from those who recently went to Baltimore, who is still at NBAC now?
Dwyer gone. Agnel gone.
Mellouli still there I believe?
Friis still there.
Mann still there.

Mellouli left because the Southern California lifestyle. It was reported here at swimswam I believe

McLean left as well. I read it somewhere else

Ok. McLean too.
That little “dream team” has exploded in a short period of time.

Is Schmitty still there ?

I believe McLean is training at South Carolina with Mark Bernadino.

Funny to see today swimswam interviews from one year ago at the same Austin Grand Prix.

Matt McLean offers insight on NBAC. Training has been challenging but perfect for his goals moving toward the 2016 olympic games.
http://swimswam.com/matt-mclean-gives-insight-on-nbac-explains-his-takeaway-from-the-2012-olympics-video/