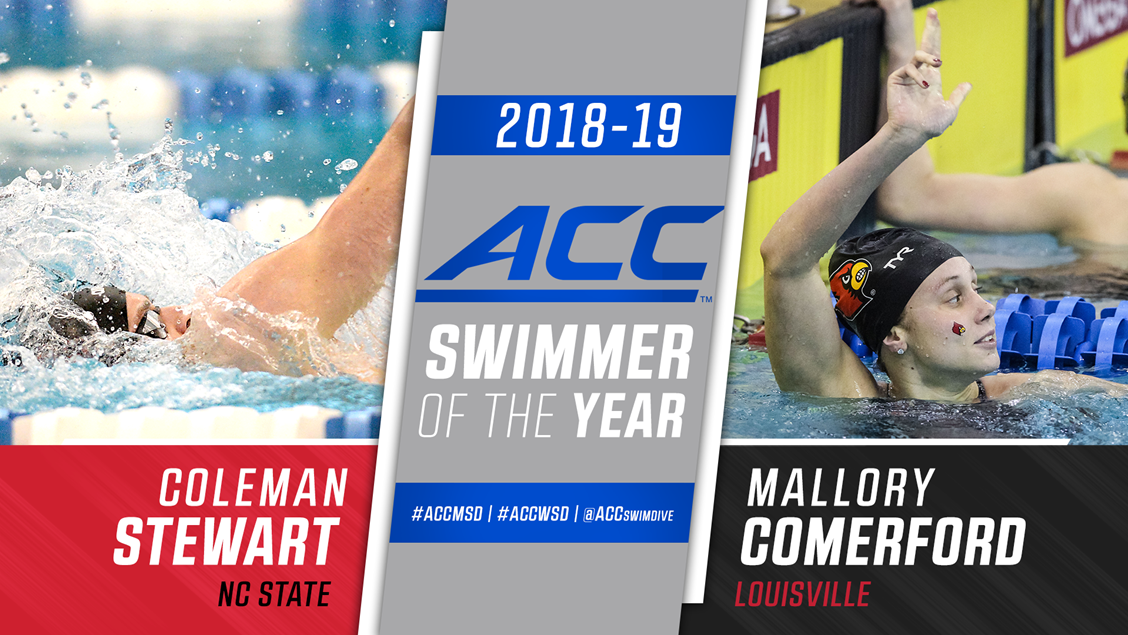 The honors, announced Friday afternoon, were determined by a vote of the league’s head coaches.

Miami’s Randy Ableman was named the ACC Women’s and Men’s Diving Coach of the Year, the first diving coach to earn both honors in the same season.

Comerford, a four-time NCAA Champion, was voted the Most Valuable Swimmer at the 2019 ACC Women’s Swimming & Diving Championships. The senior from Kalamazoo, Michigan, is a three-time NCAA Champion in the 200 free, winning the title this year, and took gold in the 100 free.

Stewart earned two silver medals at the 2019 NCAA Championships, placing second in the 100 back and the 100 fly. The junior from York, Pennsylvania, was also the Co-Most Valuable Swimmer at the 2019 ACC Men’s Swimming & Diving Championships.

A 2019 NCAA bronze medalist on the 3-meter, Blagg also earned Honorable Mention All-America distinction on the 1-meter. The sophomore from Leeds, Englad, also won the 1-meter and 3-meter competitions at the 2019 ACC Championships.

Albiero led the Cardinals to a fourth-place finish at the NCAA Championships, their best ever. Under his leadership, Comerford won two individual NCAA titles, and the Cardinals racked up thirteen total All-American honors.

Holloway led the Wolfpack to fourth-place at the NCAA Championships, equaling their best mark, and the best finish by any ACC men’s team. The Wolfpack men also racked up 22 All-America laurels, and won their fifth straight ACC title this past season.

Ableman guided the Hurricanes to two silvers and a bronze at the NCAA Championships, racking up six All-America honors in total. Miami divers nearly swept all six diving events at the 2019 ACC Championships, winning all three men’s competitions, and taking gold in the 1-meter and 3-meter competition on the women’s side.