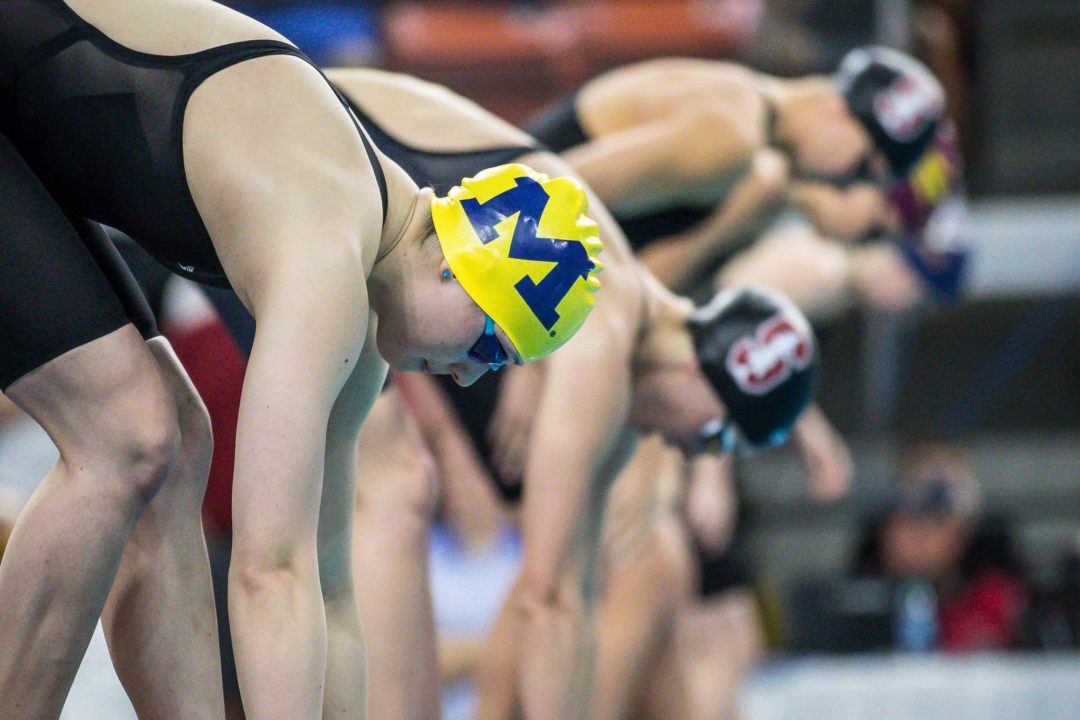 More than half of voters disagreed with a controversial DQ of Michigan's Siobhan Haughey out of 200 IM prelims at women's NCAAs. Archive photo via Jack Spitser/Spitser Photography

Our most recent poll asked SwimSwam readers for their thoughts on the controversial disqualification of Michigan’s Siobhan Haughey in the 200 IM prelims:

Question: Did you agree with the DQ of Siobhan Haughey in the 200 IM at NCAAs?

More than half of voters disagreed with a controversial DQ of Michigan’s Siobhan Haughey out of 200 IM prelims at women’s NCAAs.

Officials called Haughey for performing multiple dolphin kicks underwater on the breaststroke leg of her 200 IM. Race video made the call much more controversial, as many did not see a violation. You can watch a close-up of that turn specifically below. Haughey is in the yellow cap in the middle of the screen:

Naturally, controversial calls are a part of any sport. One doesn’t need to look much further than the NFL’s NFC Championship game this season to know that outcomes on the biggest stages can be determined by subjective calls from officials. It’s also unfair to expect officials to be perfect. They are as human as any competitor in the competition, and just as competitors and coaches can make mistakes, so, too, can officials. Maligning them, threatening them, or calling for them to be fired are typically overreactions, as controversial calls will be part of sports no matter how good officials are at their jobs.

Still, we can discuss controversial calls and weigh in on whether they appear correct or not. More than half our voters disagreed with this call, saying that Haughey’s pullout looked completely legal. Less than 10% said they saw a second dolphin kick, while about 21% said the call was questionable, but defensible from the official’s standpoint. About 14% were unsure.

The other wrinkle is that race video shows us a nearly-perpendicular angle to Haughey’s lane. That’s a vastly different view than the official had – the official was standing at the end of Haughey’s lane, and watching the underwater in question from behind. That makes it hard to come down firmly on one side or the other – the official’s angle could have made the pullout look far different. The issue of perspective also brings up discussion about underwater video review, or even underwater cameras to help officials make calls. Breaststroke pullouts, in particular, make for very tough officiating, as the perspective warp in watching an underwater movement from above the water can be very disorienting, and turbulence at the surface can further obscure any solid view of the athlete underwater.

Below, vote in our new A3 Performance Poll, which asks voters, inspired by our NCAA returning points analysis, who should be favored to win next year’s men’s NCAA title:

To me, that last paragraph above is all the more reason NOT to have DQ’d her. If, for example, there was turbulence or other obstructions to the official’s view then it should not have been called. It *seems* like this official thought s/he saw something that wasn’t there. Officials should call what they know they saw, not what they think they might have seen. Given the stakes in swimming – there’s no 10 yard penalty, you’re either DQd or you’re not – that ought to be the standard (to be fair, every official I’ve ever spoken to about things like this say that’s how they operate).

And what makes the call even more egregious is that it appears the swimmer in the lane below got away with a questionable underwater.

The first time I watched it, I thought she was the girl in the dark cap who definitely takes 2 dolphin kicks. I couldn’t really tell if Haughey (yellow cap, I presume) took 2. Maybe the official got the lanes mixed up.

each lane had its own official though, so eyes should only be on that swimmer

That is a DQ below

Izzy Ivey definitely took two kicks. So obvious. Got away with murder. Haughey, on the other hand, seems IMO to make a mini-kick as she straightens out of her turn before her actual, determined dolphin kick, so I’m not convinced that she was entirely innocent, either. Still, her infraction was so much less obvious than Ivey’s, and I think that’s what rankles the most: Haughey got busted for a questionable judgement call when the video clearly shows the competitor in the next lane cheating so flagrantly that you have to wonder if the official watching Ivey was wearing a blindfold.

Michigan swimmers are encouraged to take an extra early small dolphin kick when there is turbulence. Not saying that others don’t do it…but i know for a fact it is encouraged.

whoa–yes! Ivey’s 2nd kick was obvious. Can’t believe she didn’t get called on that.

That was Izzy Ivey

You would have a much better chance and convincing me that the DQ was for a 1 handed touch than a double fly kick, as maybe you could sell the fact that her left arm/elbow dropped before the right hand touched the wall…. but “multiple fly kicks”?!?!? C’mon now. PS, this poll is crap because it was probably taken by so many people who never even saw the video, myself included until now. And comparing it to the bologna that the Saints dealt with is preposterous. They would have won the Super Bowl. She would not have won the 200 IM or the team title for Michigan. The similarities stop by saying both were screwed over by officials, which she… Read more »

While we’re on the topic of double dolphins, watch the 200 breaststroke race video from the men’s meet and focus on Ian Finnerty

Those are actually clear as day, two dolphin kicks each pullout

there’s a video on You Tube i saw several months ago that has a collection of illegal underwaters done at the last couple of Olympics, many by the Japanese swimmers. Amazing to me that it was being done so widely.