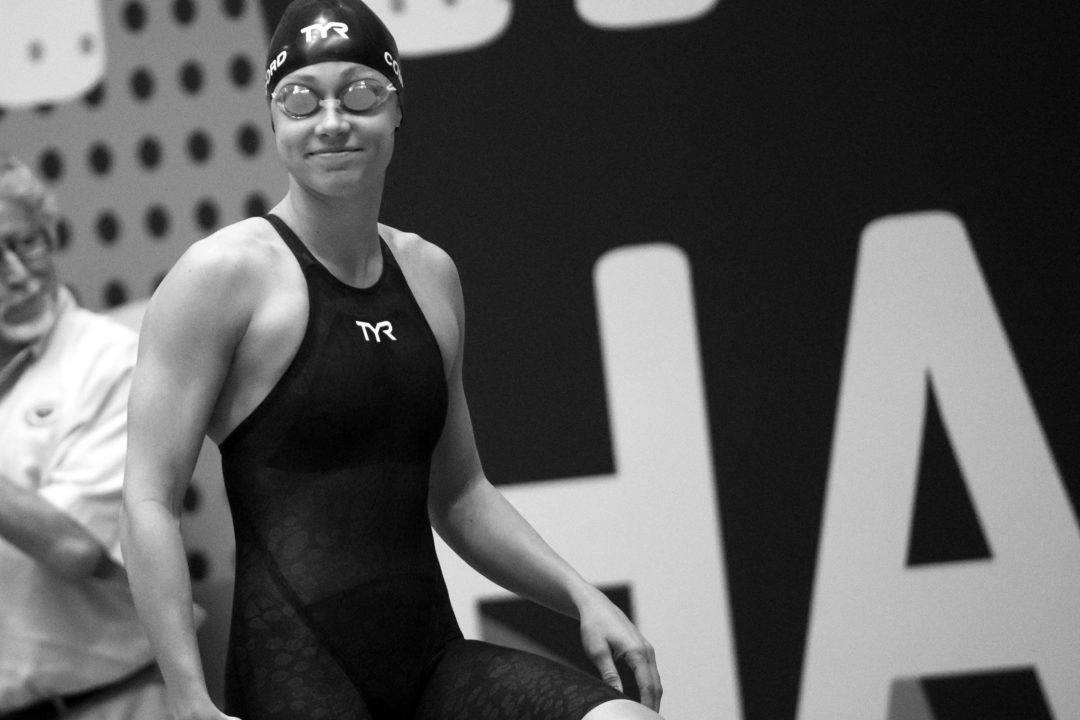 After Comerford's record-breaking 52.59 leadoff, the Americans went on to win the 400 free relay and take down the American Record in 3:31.72. Archive photo via Mike Lewis/Ola Vista Photography

The Americans got off to a good start in the 400 free relay, as Mallory Comerford took down the American Record in the 100 free with her 52.59 opening split. That shaved just over a tenth off the former record, which was set at a 52.70 by Simone Manuel when she tied for Olympic gold last summer. Comerford was 2nd on the leadoff leg only to Sweden’s Sarah Sjostrom, who smashed the World Record with a 51.71.

Comerford is now the fastest American ever and the 5th fastest performer in history worldwide. She moves up to 2nd in the World this year ahead of former World Record holder Cate Campbell of Australia. Teammate Manuel remains on the all-time worldwide top performers list in a tie for 8th with Canada’s Penny Oleksiak.

The Americans went on to win the 400 free relay and take down the American Record in 3:31.72. Taking over the middle legs were Kelsi Worrell (53.16) and Katie Ledecky (53.83). That was a fairly sluggish split for Ledecky, who popped a 52.79 to anchor for the USA last summer, but it was enough to put them ahead of Sweden going into the final leg. Manuel rocked a 52.14 on the anchor leg, giving the U.S. what they needed to hang on for gold. That was her fastest relay split ever by far, topping the 52.43 she did as the anchor of the 400 medley relay in Rio.

Probably a good thing Mallory didn’t make the team in the 100 butterfly. She missed by a hundredth to Sarah Gibson. With the butterfly prelims and semis on the same day as this relay it likely would have zapped some energy and forced Mallory to devote time to butterfly as opposed to freestyle only. I doubt she leads off in 52.59 under those circumstances.

As tight as this race was, nothing could be surrendered.

Besides, Mallory wasn’t going to factor in the butterfly. Maybe fringe finalist. She could improve markedly next year.

Sjostrom obviously had to contend with the butterfly schedule but that’s a different level right now.

It isn’t surprising that the coaches chose Ledecky over Neal for the relay….

I do believe coaching staff decided on Ledecky based on he Rio 400 relay performance. I also believe Katie will have to proof herself in 100 free to be picked for the final next time.

She was 2 seconds slower in the 400 than her best time. I’m sure she was a bit fatigued from the 400 earlier in the session, but she always recovers super fast. I doubt the 400 had much of an effect on her 100 relay swim. She’s just slower. Make any excuses you want, but she’s just slower.

I told a few of my college coach friends months ago I wonder if we’ll ever see another Ledecky LCM free best time again. Hopefully I’m wrong, but no one can continually get faster and faster.

Katie Ledecky is slower in the 100 m free:

Ledecky does not have to prove herself in the 100 free, but the coaches need to take into account whether she will have just swum a tough race a few minutes earlier.

Ledecky just spins her wheels when she tries to sprint.

Awesome swim by Comerford! Do you think she benefitted from drafting off of Sara way ahead in the next lane?

Considering she was not in the next lane, I’d say “No”

Piano is back …love it

Both Manuel and Comerford were very fast on the way home: 27.01, 27.08 respectively. It is very fast. Based on this result I think that Manuel will be faster than Comerford in individual race.

I tend to agree.

Wouldn’t draw too many concrete conclusions. What will be the impacts of their other races between then and the 100free final ? At least one of them will be drafted for the mixed medley relay; if they want 4X200 relay medals then they will most likely be drafted for those relay heats (more likely to rest Ledecky & Smith). They will have that final the same session as the 100semis; they’re both fairly certain to make the 100 final but they’ll have had some high pressure racing under their belts by then …. as against the first day of competition.

One thing to note is Manuel’s very conservative exchange on the relay, a .42, so that 52.14 looks a bit more impressive.

Manuel had a very slow very safe RT of 0.42. Subtract out her RT and the 0.70 RT of Comerford and Manuel is 0.17s faster. Relay starts may be a bit different from regular starts, but I doubt it would be worth as much as 0.17s. On the other hand Comerford did have a morning swim which may have taken a bit off her evening swim–so it is really too close to call between the two.

I am just going to put a statement out there… I think Manuel is over rated. Hot takes.

I can see that point of view. But I would say she is dominant at this point. She will either get faster with time or maintain.

Of course not. Dominant is the 14 fastest times in history, reference Katie Ledecky in the women’s 800 m freestyle.

Yep. Or, what Sarah Sjostrom is doing; what Cate Campbell has done in the past. Will she get to that level…I think more likely than not. She is only 20. Comerford will be right there with her as she continues to progress.

and just behind u find Leah Smith ….

I wouldn’t rush with Hosszu at least until tomorrow final. For some reason she didn’t swim 400 relay today and Hungarian team missed final. She is the best freestyler that Hungary has this season. So what was that? The mistake of coaches or she isn’t that dominant as you portrait her.

I can agree with this as far as American women. But she seems much less consistent than a host of European and Aussie ladies. My personal opinion is that she gets too much limelight in the USA compared to the non Americans

Olympic gold while taking down the SWE and AUS says otherwise

She’s on kind of a Nathan Adrian-like trajectory to me. Never an overwhelming, dominant favorite in any event, but a huge relay piece and occasionally wins Olympic gold medals.

I appreciate all the varying points of view, interesting to hear. I just feel that she is overly lauded as the next thing in American sprinting that will dominate the world scene, when in reality there a tons of other athletes both in the US and abroad that are just as fast and faster. I have nothing against her, more the portrayal of her by certain media such as Mel.

What is “over rated” about her? The fact that she medaled in every event she swam at her first Olympics or is it something else? pls help

Simone Manual’s 52.15 made also american best ever split. Comerford and Manuel were practically of the same speed in the race.
I would’ve predicted them to decide who will take silver and who will take bronze in individual race if not these splits of Kromowidjojo and McKeon : 51.98 and 52.29 respectively. The W100 free promises to be an incredibly fast race that we have never seen.
I’m just wondering what made coaches to choose Ledecky over Neal. Have they expected better time or it was dictated by media considerations. Katie doesn’t need it: this Franklin like six gold medal count. Her legacy is well above that. But the fact is that Lia Neal most likely were faster… Read more »

This proves that the preliminaries and final of the women’s 400 m freestyle in the same day will take its toll.

Would giving a day off between 400fr and 400IM prelims and finals be overkill in your mind, or a good idea?

It is what it is.

Lia Neal was even faster with a leadpff 53.94 if you figure an 0.5s difference between a normal and a relay start.

As coach of the women’s team at the 2017 FINA World Aquatics Championships, Greg Meehan dodged a bullet.

Yes he did. I still think the Rio relay order was wrong also. Weitzell and Manuel should have been in spots 1 & 4.

I bet Simone is happy with a gold medal from the women’s 4 x 100 m freestyle relay.

Seems like Manuel/Comerford is becoming what we thought Manuel/Weitzell should have been.

Weitzell is only 20 years old. Plenty of time to bounce back next year.

True. But right now. It’s the Comerford Manuel show. It would be nice to have 3 excellent sprinters.

Abbey is done like the many others before her at Cal.

Unhappy, I doubt it. Will she use this as motivation? YESSS!!!.