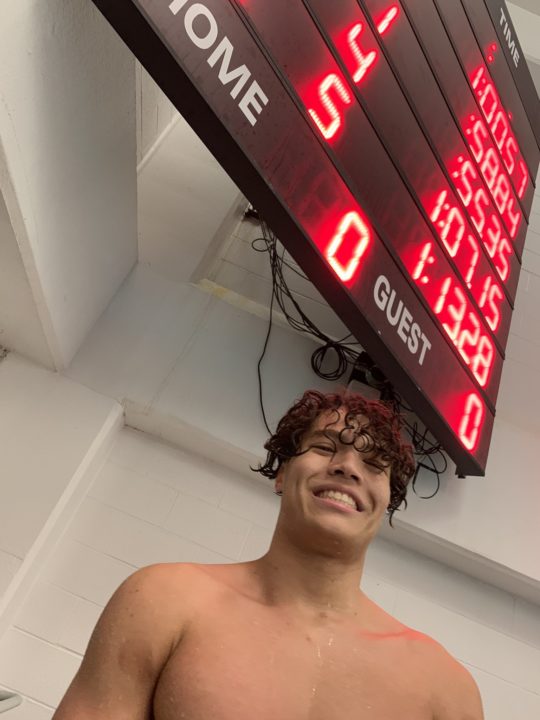 Episcopal Academy swimmer Cole Whitsett has broken the National Independent High School Record in the 100 short course meters butterfly. Racing on Tuesday in a dual meet against The Haverford School, in a meet that the Episcopal School won 96-90, Whitsett swam a 55.35 in the event. That broke both the old Pool Record in the event as well as the National Independent High School Record.

The old record of 55.40 was set in 2011 by Patrick Park of the Peddie School in New Jersey. The overall and public high school records in the event still belong to Brendan Burns of Conestoga High School in Berwyn, Pennsylvania, who swam a 52.41 in 2018. Whitsett’s time, while well short of Brendan Burns’ overall record, is believed to be the 2nd-fastest ever in high school competition.

Short course meters, raced in a 25 meter pool, is an approved course for high school competition in the United States, but is by-far less-competed as compared to short course yards, raced in a 25-yard pool. The Olympic distance pool of 50 meters is not approved for high school competition, generally, in the United States and no official records are kept.

Why y’all do him like that w the pic

55.3 SCM will translate into much faster than his 49.3 SCY personal best. Watch out for him at Easterns!

May want to check your numbers — it actually converts to a 49.8 in SCY.

Imagine having this amazing of a swim that breaks the national independent high school record and realizing that Brendan Burns went almost 3 seconds faster. Crazy how fast kids are going nowadays.