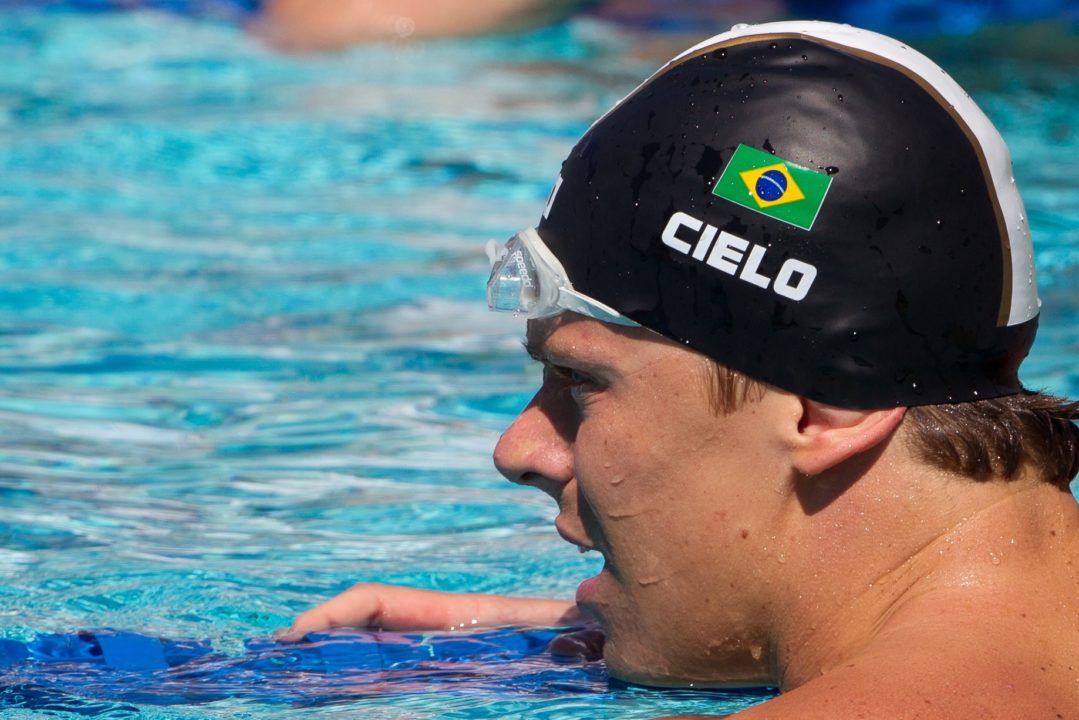 Friday was day 3 of the South American Championships, and Cesar Cielo got his first crack at a sprint freestyle event in the individual 50 – where he is the defending World Champion.

After blasting a top-of-the-world 50 fly on Wednesday, we speculated that a 21-second 50-free was in store for Cielo today, and he nailed just that with a 21.85 victory to move to the top of the World Rankings. His prelims swim left a bit of nerves, as he was only the 4th seed in a 23.04, but that was truly just a tuneup swim for this final.

Cielo’s understudy Bruno Fratus, who had the second-best time in the world in 2011, would earn runner-up honors here in 22.13. That makes him number six in the world.

As for the champion, Cielo was a notoriously-fast in-season swimmer in his last few seasons when he was training at Auburn under Brett Hawke et al. Since returning home to train in Brazil, however, despite big increases in training yardage (rumored to be at least doubled), he’s taken his in-season times to a whole new level; and has still been able to bring the times down at the big championships.

As for Fratus, though he has only recently been noticed by the international community, has been good for a couple of years now, and he becomes a serious medal contender for London.

Thiago Pereira won his 2nd event of the meet with a 200 IM title in 1:58.49 – the third-best time in the world this year. That’s also about as good as he’s looked at this time of the year as he experiments with a brand-new IM technique that is supposed to allow him to close his races faster. Thus far, it seems to be paying off, as he closed with a split of 28.7. For comparison, in the semi-finals of last year’s World Championships (where his total time was about the same), he closed in 29.66. This looks like a medal-worthy strategy for Pereira.

With Brazil’s best female backstroker, Fabiola Molina, still out on a drug-suspension, their second best Etienne Medeiros jumped in to the vacancy and earned the South American title in the 50 by over second ahead of the next-best competitor.

In the 100 fly, Brazil’s Glauber Silva won the race in 52.80 to upset defending champion Albert Subirats of Venezuela. Subirats, swimming out of an outside lane, clocked a 52.96. Former Brit-turned Paraguayan Ben Hockin placed 3rd in 53.21.

Brazil’s Manuela Duarte took the women’s 200 free in 2:00.58, which is the fastest time by a Brazilian since 2009. The runner-up in the race was Venezuela’s Andreina Pinto in very-nearly a Venezuelan Record of 2:00.83. That’s just four-hundreths away from her own record.

Live results for the meet here.