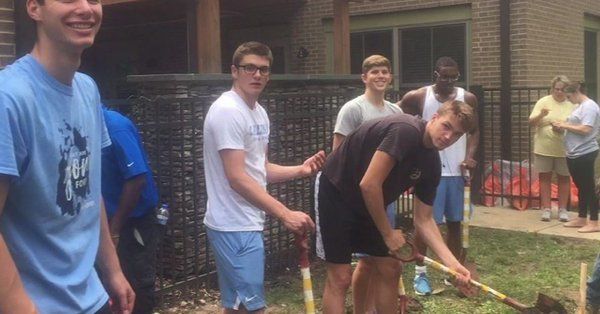 CHAPEL HILL, N.C. — With Hurricane Florence quickly approaching, the residents of North and South Carolina continue to make preparations for the storm as best they can. So on Tuesday, when head coach Rich DeSelm of UNC’s swimming and diving program heard that the Ronald McDonald House just off campus needed help with some final preparations, he reached out to his remaining student-athletes in Chapel Hill.

“I got a call at work from Scott Washle, a good friend and a board member at the Ronald McDonald House, to see if I could mobilize some people to go over and help put sandbags up with the hurricane coming,” DeSelm said. “We had let our team go home yesterday, but some of the guys decided to stay in town. They were at the weight room and I texted them, told them what was up and hoped that they would volunteer to do it.”

Nick Palmer, a sophomore from Peachtree City, Ga., was the first to respond. The distance freestyle swimmer was able to round up four other teammates — sophomore Daniel Koenigsperger and freshmen Thomas Bretzmann, Sterling Smith and Luka Tomic — before heading over to the House.

“We all just wanted to give back to the community and help out before the hurricane,” Palmer said. “They said one of their buildings flooded during the last big rain storm so we wanted to help out with that.”

Haley Waxman, the marketing and communications manager for the Chapel Hill Ronald McDonald House, was relieved to have some extra hands as the House braces for the hurricane.

“From the second the student-athletes got there, they were ready to work,” Waxman said. “We received about four or five palettes of giant sandbags from the university, and they were able to help us unload and lay those sandbags so we can hopefully divert some of the water that is coming our way. Our house is in kind of a low-lying area and we’ve had issues with flooding in the past with far lesser storms so getting the sandbags and the buildings prepped were really important. They helped dig a couple trenches to guide some water towards the drains that we do have because the drains work great. It’s just making sure the water gets there. Their work was immensely helpful.”

“It ended up being a great day,” DeSelm said. “Our guys didn’t have school, they had already been to practice and to the weight room so I’m really proud of them for going down to help out.”

Shout out to our awesome student-athletes who helped @RMHch finish up some last minute preparations before Hurricane Florence! #GoHeels pic.twitter.com/mvJ2S4EklC