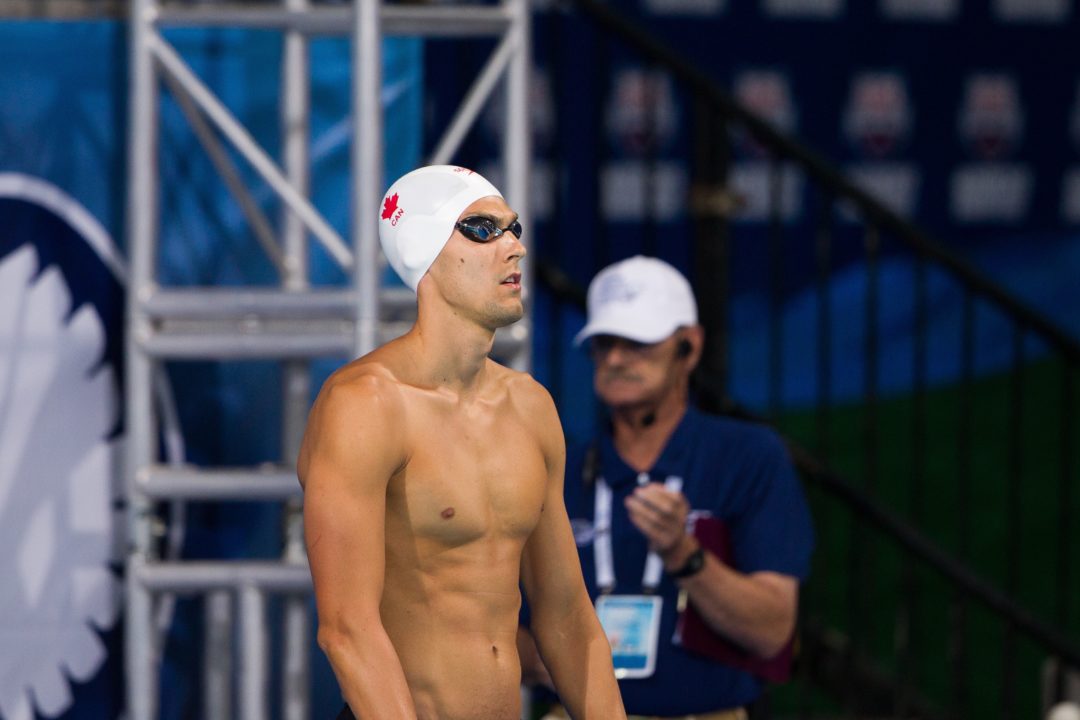 Scott Dickens came within two-tenths of a National Record, and was cruising, in prelims. (Photo Courtesy: ©Tim Binnings/TheSwimPictures.com)

The 2012 Canadian Olympic Swimming Trials are off to a hot start in Montreal, Quebec Canada, as we kicked off the first day Tuesday morning (the meet follows the Olympic schedule basically, except that there are no semi-finals: all finals are swum in the evening of the corresponding prelims).

The final of the night will be in the women’s 400 free, where Brittany MacLean out of Etobicoke took the top seed in 4:12.45, followed closely by Barbara Jardin (4:12.70) and Sam Cheverton (4:13.04). All three looked as though they were coasting just a bit, especially MacLean who still had a ton of energy left on her last 50 meters. All three of them have the ability to get under the Olympic Qualifying Time in finals.

Behind them were Lindsay Delmar in 4:13.15, which is a full-second lifetime best for her. She and Savannah King (4:13.89) will have to do serious work to keep pace in the final. The top-seeded Alexa Komarnycky will be near the outside of the pool in the finals, with a 4:13.92. She has really exploded in the last year, and though she was too late to qualify for Worlds in this event (she’s also a very good 400 IM’er), she did swim an early-taper 4:08 last year in this same pool in the Canada Cup.

The men’s 100 breaststroke prelims was led by Scott Dickens in 1:00.39. Dickens, the National Record holder, is on target to become the first Canadian to break the minute mark this year, as he looked very smooth into that time. After the race he said that he “was going easy!” and that he “was pretty surprised with the time” because he wasn’t putting out any particular effort, knowing he’d be smoothly through to finals.

Richard Funk, who is a freshman at Michigan and had a bit of a disappointing NCAA meet last weekend, took the 2nd seed in 1:01.21. Mike Brown was also safely through to the finals with a 1:02.82, though he’s much better in the 200.

As one tweeter put it this morning: “Katerine Savard is really fast.”. The 18-year old from CSQ topped the prelims of the women’s 100 fly with a 58.55 to take the top seed, and solid control, of the final. She’s a big favorite to win this race, but getting closer to a 58.0 would be a great time for her.

Chasing her will be Caroline Kuczynski, who trains in the US at Arizona State, in 59.65, which is a best time that matches her improved performance this year in the short course pool. The 4th seed goes to Kendra Chernoff in 59.76, which is the first time she’s broken a minute in the race since 2009. It’s also a new Alberta provincial record (in her first go around, she trained with the Saskatoon Goldfins, which is located in Saskatchewan).

Among those missing the final in the 100 fly is Paige Miller; but much like we saw from her in the NCAA season she’ll hold on for the 100 back where she should be better. Brenna MacLean, who was expected to final in this race, continues to have a very difficult last-12-months, and she was 18th in 1:01.77.

In the men’s 200 free, the canadians looked solid with the top three seeds going to Blake Worsley (1:49.11), Chad Bobrosky (1:50.02), and Hassan Abdel-Khalik, in 1:50.42. As of now, none of these men are going to be close to Olympic qualifying, and the winner will probably be the only one out of the field to qualify. Worseley is the favorite in the evening, and though Bobrosky could challenge him, he’s going to have a tough time coming off of a USC taper for NCAA’s. He may have been able to hold it through until now.

Missing out on the final was Ryan Cochrane, though this was sort of a “nothing-to-lose” swim for him, as he’s already all-but-locked-up Olympic bids in the 400 and 1500, his best swims. He was 9th in 1:51.03. That time gives us a little bit of a peak into how little he’s rested for the meet – he was faster in the US at the Missouri Grand Prix in early February.

18-year old Alec Page is looking like he could be a breakout star for a men’s team that badly needs one. He was easily the top seed in the 400 IM with a 4:20.02, which is a lifetime best for him. He’s really developed some easy speed through his butterfly as he’s aged, and that’s made huge improvements in his backstroke time. I think that he could get down around a 4:18 in finals, conservatively.

Stay up to date all week with what’s going on in Montreal with our Candian Trials Event Channel: www.swimswam.ca. Finals kick off at 7PM Eastern, 4 Pacific.