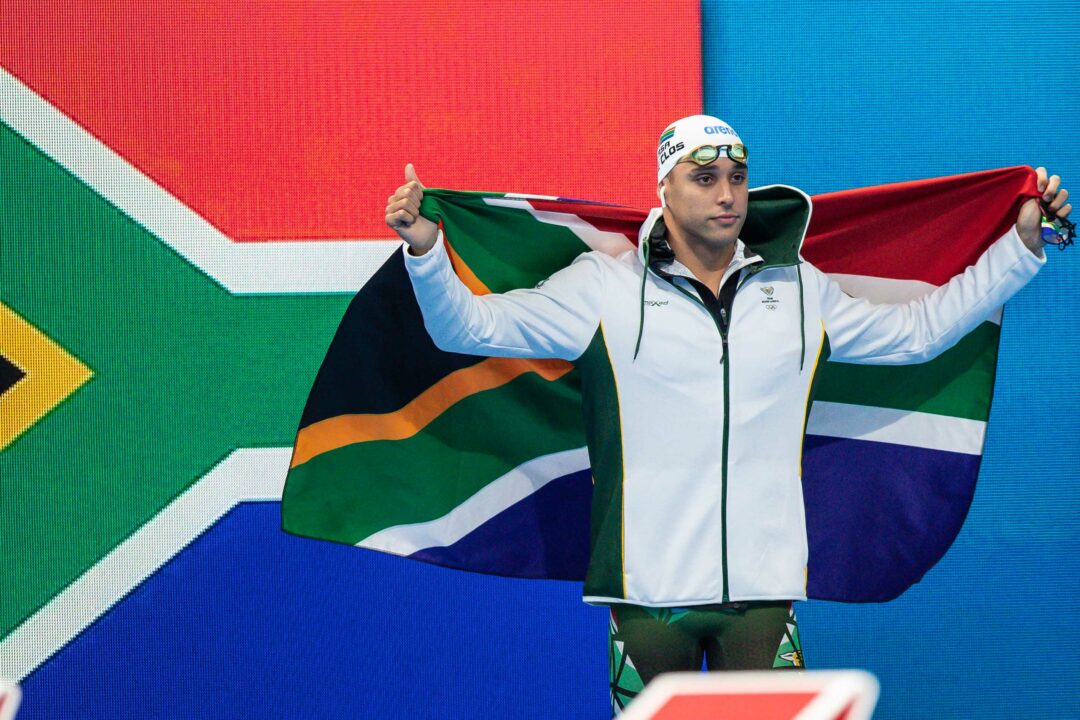 The South African team didn't show for the men's medley relay due to "transportation issues" and Canada was DQed with only eight teams racing the event. Archive photo via Jack Spitser/Spitser Photography

The final of the men’s 4×100 medley relay during the last session of swimming at the Commonwealth Games later today will only feature seven teams.

Despite 11 countries being entered in the event, just eight of them turned up to the blocks for prelims on Wednesday morning, with the main puzzling absence being the South Africans.

Among the three teams that didn’t show—South Africa, Seychelles and Singapore—the South Africans were the only team to field a lineup of swimmers that were going to the swim the heat: Andrew Ross, Michael Houlie, Guy Brooks and Clayton Jimmie.

They were also the only one of three with a shot at a medal, with the chance to bring in 100 back winner Pieter Coetze, legendary butterflier Chad Le Clos and freestyler Matt Sates for the final.

However, the team didn’t turn up, and it was reportedly due to one of the athletes running into “transportation issues,” according to South African outlet SABC News, as he was unable to get to the venue on time.

Brooks was also entered in the 200 IM prelims on Wednesday but didn’t show in his heat, indicating he may well have been him. Ross did race the prelims, along with Sates, both missing the final.

This unfortunate circumstance results in Le Clos, who had a pair of fourth-place finishes on Tuesday, having no more medal opportunities at the Games. Le Clos won his 18th medal earlier in Birmingham, which tied him for the most all-time, but he’s since been overtaken by Australia’s Emma McKeon, who now has 19 and will go for number 20 in the women’s medley relay on Wednesday.

So with South Africa, Seychelles and Singapore not competing, there were only eight nations contesting the prelims of the men’s medley relay. A spot in the final, then, was locked up, barring a disqualification.

But that’s exactly what happened to the Canadian team, as the quartet of Javier Acevedo, James Dergousoff, Patrick Hussey and Stephen Calkins were hit with the DQ. Relay disqualification is almost always due to an early takeover, but in this instance, it was due to Acevedo moving prior to the start, according to the commentators.

Acevedo has since confirmed as much on Instagram Stories, posting the following statement:

I want to address what happened this morning on the relay. I moved my head slightly on the start unintentionally and disqualified Canada from the 4×100 medley relay. I feel terrible that I let my teammates down and took away a medal opportunity from them. I promise I will learn from this mistake.

Acevedo has had a phenomenal week of racing at the Games, including winning individual bronze and setting a new Canadian Record in the 50 backstroke.

Like South Africa, Canada would’ve been a medal contender in the final (at least for bronze), with 100 fly winner Josh Liendo and 100 free finalist Ruslan Gaziev set to enter the fray.

The final was always going to be a head-to-head battle between England and Australia for gold, but now the door is open for Scotland and Wales to get in and grab bronze with Canada and South Africa no longer in the hunt.

How do swimmers at that level not find a way to get to the pool on time?!? Geez.

I swear it could be easily determined via video review whether or not the movement advanced the swimmer using forward motion in any manner. If it doesn’t, it shouldn’t be ruled a DQ; sounds silly to say, but it’s quite close to qualifying as discrimination based on neurological capacity.

flinch rules have always been completely bogus… almost 100% of the time, it’s something the swimmer did unintentionally.