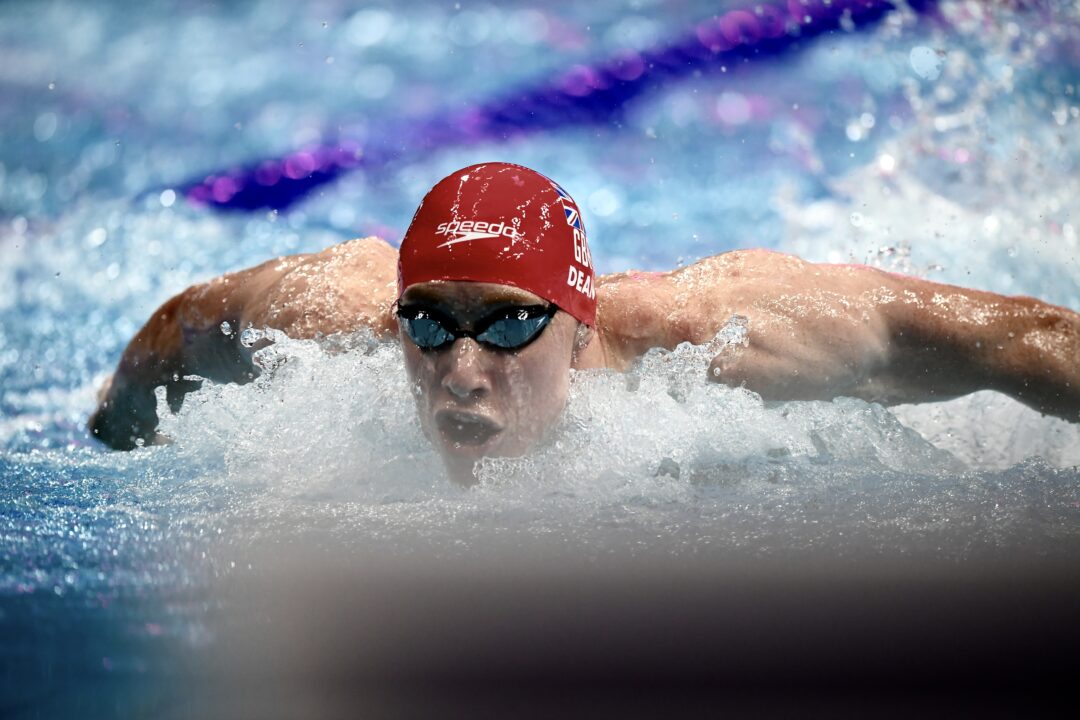 The men's 200 IM is a pretty deep field for these Games. Scotland's Duncan Scott is entered with a speedy 1:55.28, and he's likely the favorite. Stock photo via Fabio Cetti

The final prelims session of the 2022 Commonwealth Games is upon us, and it’s a short one. This morning’s action features only prelims of the men’s 200 IM, women’s 400 free, and men’s 4×100 medley relay.

One of the most exciting races in tonight’s finals will be the women’s 400 free. While we’ve grown accustomed to watching fierce Katie Ledecky vs Ariarne Titmus battles in the event, Ledecky is, of course, not competing at these Games. Instead it will be Canadian 15-year-old Summer McIntosh who will be taking up the mantle to try and challenge the World Record holder. It may seem like an impossible feat, but McIntosh is swimming well, and it’s possible she could end up pushing Titmus much harder than many might expect her to tonight.

The men’s 200 IM is a pretty deep field for these Games. Scotland’s Duncan Scott is entered with a speedy 1:55.28, and he’s likely the favorite. Afterall, Scott is the Commonwealth Record holder (1:55.28) in the event, and he swam that record just last summer. However, there are a lot of fast swimmers IM’ers in this field, including England’s Tom Dean, South Africa’s Matt Sates, the Canadian duo of Finlay Knox and Javier Acevedo, and Australian Mitch Larkin,  who is the defending Commonwealth Games champion in the event

England’s Tom Dean led the 200 IM this morning, finishing as one of two swimmers to crack 2:00 in the heats. Interestingly, Dean, who is primarily a freestyler, broke away from his competitors on the breaststroke leg this morning, splitting a very solid 34.53. Canadian Record holder Finlay Knox was the other swimmer to dip under 2:00, coming home in a speedy 28.13 to post the 2nd fastest time of the morning.

Commonwealth Record holder Duncan Scott will also be in the middle of the pool tonight, after cruising to a 2:00.41 this morning. Scott had a really nice backstroke split this morning, swimming a 29.88 on that leg.

Notably, defending Commonwealth Games champion and Commonwealth Games Record holder Mitch Larkin of Australia is out of tonight’s final after finishing 9th this morning. It almost appeared as though Larkin was too conservative taking the race out this morning and tried to get back into it at the end, but ultimately fell just short. Larkin, one of the best backstrokers in this field, only split 30.64 on the back leg this morning, marking the 6th-fastest back split in the field. His breaststroke only came in at 36.39, then he had a strong 28.41 on the free leg, but it wasn’t enough.

Canadian Javier Acevedo did not swim the race the morning.

In a fairly relaxed prelims of the women’s 400 free, New Zealand’s Erika Fairweather picked up the top seed for tonight’s final. Fairweather was racing right next to Canadian 15-year-old Summer McIntosh, trailing her right up until the end of the race. McIntosh was out faster and held her lead all the way up until the final 50m of the race, when Fairweather turned it on to get her hand on the wall before McIntosh.

Ariarne Titmus was clearly cruising this morning, splitting 31.32 on the 2nd 50, then holding at 31 all the way until the final 50 of the race. We can expect much faster racing tonight, and it should be a really fun race to watch.

There were two no-swims in the final heat this morning, both from England. Neither Freya Anderson or Tamryn van Selm opted to race the 400 this morning.

Australia turned in a really solid performance this morning, taking the first heat in 3:34.35. Mitch Larkin led the squad off in 54.46, then was followed by Sam Williamson with a 1:00.15 breaststroke split. Cody Simpson made an appearance to swim the fly leg this morning, clocking a solid 51.49, and William Xu Yang anchored the team in 48.25. We know the Aussies can be faster tonight, so it will be interesting to see what changes they make to the lineup for finals.

England handily took the 2nd prelims heat this morning, posting a 3:35.88. Luke Greenbank got the English out to a solid start, splitting 54.28 on backstroke, which was the fastest back leg in the field this morning. Greg Butler clocked a 1:00.79 on the breast leg, Jacob Thomas Taylor Peters was 52.30 on fly, and Jacob Whittle anchored in 48.51.

Canada finished 3rd overall this morning but was disqualified.

With Canada out, only 7 teams remain, meaning all relays that swum this morning advanced to the final tonight.

What has happened to the home nations representation in the female 400 free?

That is gutting for Acevedo. He has been an absolute horse for team Canada past 18 months. I wasn’t even sure if he warranted Olympic selection last year as his career has seemed to stall. All he’s done since it’s:
*Be a great team player at Olympics swimming mixed Medley prelims only that had no shot at finals
*Race well for LA Current in variety of events
*Break Canadian 200 fly SC record
*Drop huge 47 splits at Worlds, mixed free silver
*Break 50 back LC record at Coms
*Drop more 47 splits hear to help Can relays
*Get inserted into 4*2 (not even on worlds team) and throw down a 146, fastest… Read more »

Can’t wait to watch McIntosh and Titmus. I think Summer is riding a high from this week and we’re going to see something special in this 400.

I see Titmus winning, not Summer’s time yet. Summer will be to Titmus here what Titmus was to Ledecky in 2018.

Not false, but Summer is so gifted!

What happened to the home nations female representation in the 400 free ?

How does Canada dq. Everyone makes it back. Baffled at the lack of discipline and focus on relays in international meets. I always thought poor relay swims were a torrie huske issue. May be a much bigger issue than we realized.

Possible side effect of limited sized groups training during Covid?

This is way over analyzing and discrediting to Acevedo and the team. He flinched on the start, period. Subtle mistake that he feels terrible for, but happens to everyone at some stage. Penny at Worlds. Even a number of high profile track sprinters at their recent worlds.
Simple mistake, nothing more. Certainly not a ‘discipline’ issue nor a ‘bigger issue’.

I hope McIntosh can beat her time from worlds

You would hope Arnie could hold on here – but next year or 2024 Summer is gonna prob be in charge of this event. Earlier tonight Ch7 Australia had an interesting graphic of 400free times at 15yo for Katie, Ariarne & Summer.

McIntosh lane 5 and Titmus lane 3 tonight, not directly side by side. Will be interesting

That is not an issue