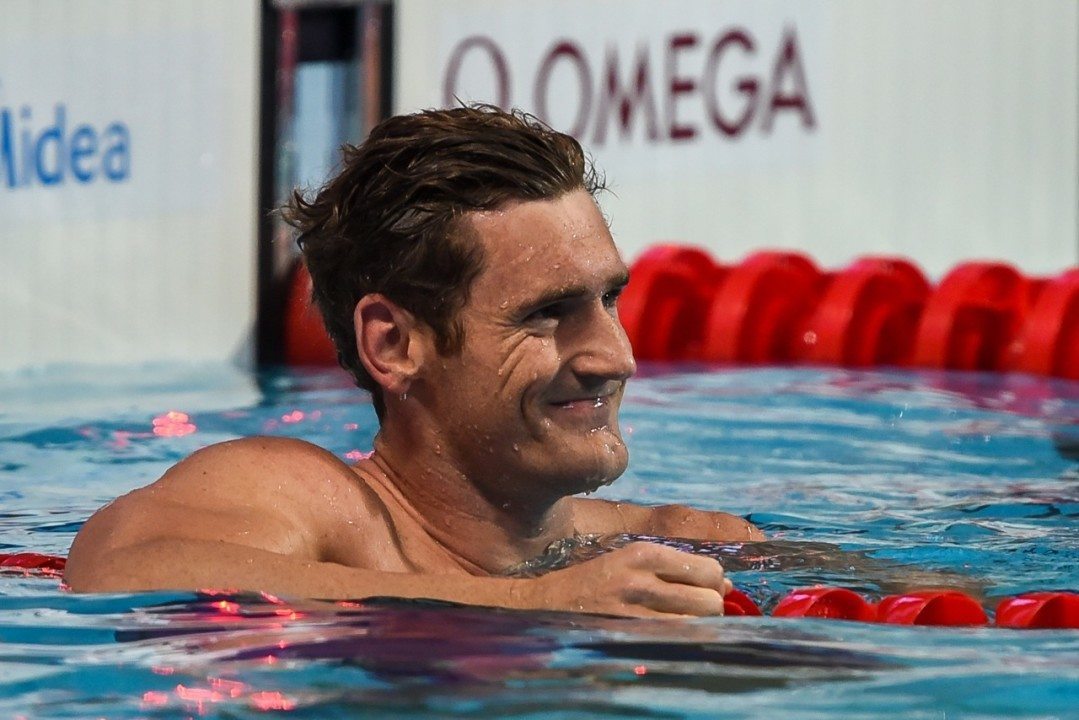 Waddell discussed not being able to financially support himself with swimming and why he wasn’t able to compete in the ISL as he had planned.

Cameron van der Burgh set the tone and was all-smiles as he pulled his breaststroke teammate Jarred Crous through to a qualifying swim in the opening event at the South African Olympic trials on the 5th day at the Kings Park Pool in Durban this evening.

Olympic gold medalist in the 100m breaststroke, Cameron van der Burgh, rose to the occasion yet again with another solid performance in the 200m distance to record another Olympic qualifying time of 2:10,13 – and in doing so pulled his NTS teammate Jarred Crous through with him to his first qualifying time in 2:11,65. Crous becomes the first new South African qualifier for the Olympics in two days in Durban.

Van der Burgh set a blistering pace to turn in 1:01,91 at the halfway mark with Crous not far off in 1:03,06, and gave up very little to his decorated compatriot over the last 100.

“I was hoping to go 2:09 after last night’s swim,” said Van der Burgh. “I tried to keep my stroke through to the end and at the 150m mark I felt that Jarred was close enough to qualify. It is great having another qualifier and we now just need a woman on the team!”

Van der Burgh was making reference to the fact that with now 7 men headed to the Olympics, no South African women have qualified yet.

Ayrton Sweeney ended a distant third this time out slightly slower than the semi-final with a 2:14,36.

The pace was set by Tayla Lovemore in the first semi-final as she out-touched the incredibly-busy Marlies Ross 57,05 to 57,13, while Jessica Ashley-Cooper took erd in 57,84.

A determined Erin Gallagher then set the early pace in the second semi to clock the fastest time overall in 56,30 ahead of Karin Prinsloo in 56,54 and Seychelles Felicity Passon in 57,63.

Martin Binedell was out on his own in the first semi-final in his favourite event and was just outside that magical 2 minute barrier with a 2:00,15. Following him in that heat was Ruan Ras in 2:04,57 and David van der Colff in 2:07,15.

It was a brave effort from the upstart star of these Olympic trials, Christopher Reid, as he has some difficult decisions ahead after posting a 1:58,31 to just miss the Olympic QT by 0,09sec in the second semi-final. Neil Fair followed in 2:02,10 and Ricky Ellis in 2:04,03 is set up to join them in Friday’s final.

Rene Warnes had the difficult task of chasing a dream out on her own after her 2:13,85 semi-finals time. After turning in 1:03,26 at the halfway mark, she was not able to find the acceleration needed to get anywhere near the QT of 2:09,33. She tired more on the last length and ended on 2:16,75 and was visibly disappointed by adding three seconds from her Wednesday swim.

Douglas Erasmus took the race to his opposition in the glamour event, 100m freestyle, and paid the price for his 23,40 turn at the 50m mark. It was a fast finish from Calvyn Justus that saw him the only man under 50 seconds with a 49,88 victory. Middle-distance swimmer Myles Brown showed his sprinting ability with a 50,21 to edge out the disappointed Erasmus who ended on 50,31.

“I did not know I had even won until I saw the cameras staying on me. I thought Douglas had done the 49,88,” said Justus. “It is the first time I have broken 50 seconds so I am really happy.”

Erasmus and Caydon Muller both broke 50 seconds in the semi-finals on Wednesday, only to fall short on Thursday.

The first semi-final was Franko Jonker‘s from the start as she raced through in similar splits to her prelims performance and ended 0,17sec faster in 2:28,70.

Tatjana Schoenmaker looked in full control going out marginally slower than her prelims swim in 1:10,97 in the second semi-final, only to end so with a 2:27,48 – just 0,54sec from becoming the first South African woman to qualify for the 2016 Olympics.

The race between these two, who are fairly matched in their splitting, makes the battle for gold and an Olympic spot between those two. A separate battle will also be on for the bronze medal between Kaylene Corbett (2:32,29), Marlies Ross (2:32,62) and Taryn Mackenzie (2:33,33).

Michael Meyer, who like Rousseau and Bosch made the trek from the United States for this meet, qualified just 7th in 2:06.32.