After Disappointing NCAAs, Clark Smith Bounces Back in 1st Swim in Mesa 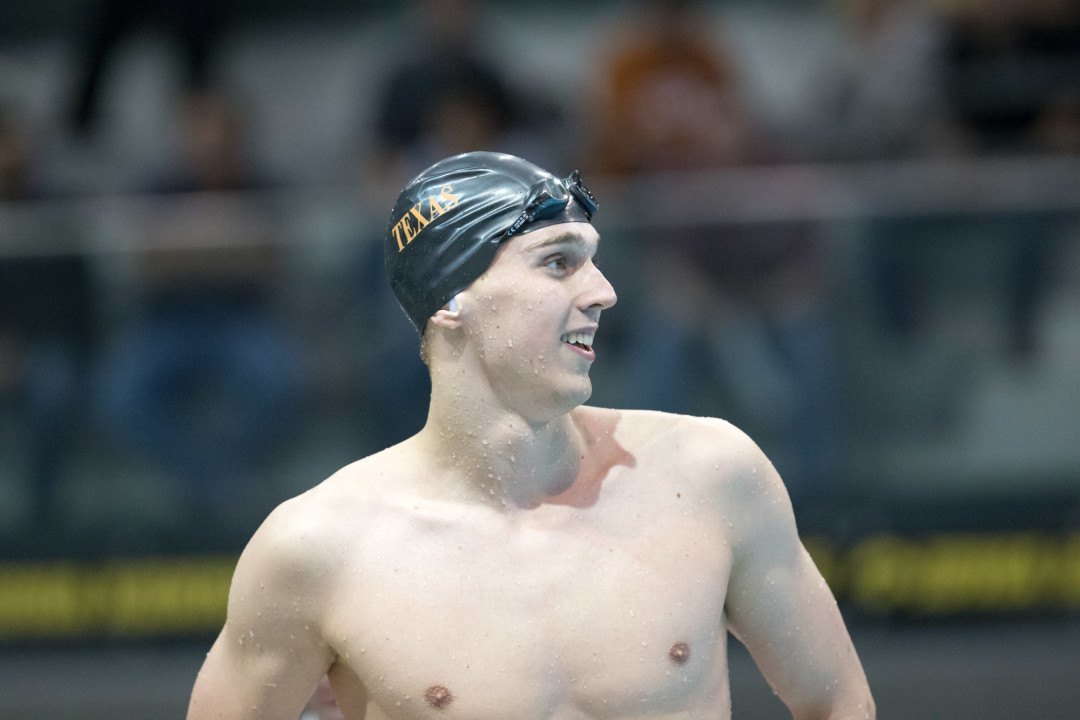 Clark Smith didn’t have the meet at the 2016 NCAA Championships that he, or most of his fans, had hoped for. After swimming mid-season times that had the whole country chattering about what he was capable of on a taper in Atlanta, Smith managed to muster only 5 individual points – on a 12th-place finish in the mile – for the entire meet.

But with implications from teammates that his nerves got the best of him, the Texas junior, who turns 21 on Sunday, bounced back in his first swim of the 2016 Arena Pro Swim Series in Mesa: the 200 free.

That swim for Smith is just half-a-second short of his lifetime best of 1:49.23 that was done last summer in College Station at a mid-level “senior circuit” meet (similar to Sectionals in Texas, but usually without the tapers). He didn’t enter the race at U.S. Nationals two months later, and he doesn’t usually race again this quickly after NCAAs, so there’s not a ton of context here, but to an outside observer, the swim is at least an encouraging one.

Across all meets, Smith ranked 4th in the 400 free in the U.S. rankings last year, ahead of 2012 Olympian Conor Dwyer and about a second behind the second-ranked American (key to Olympic qualifying) Zane Grothe. Given his short-course improvement curve, even if he didn’t finish that curve at NCAAs, Smith is still a contender for the U.S. Olympic Team, despite the letdown in March. A 1:49 in the 200 free doesn’t put him on any short lists yet, but it’s a sign that whatever it was that happened at NCAAs, Smith is still in-play heading toward Omaha.

Well done to him on a solid morning time.

It must be very difficult for him having these problems, and I’m sure hearing all the negative press towards him makes things even harder. As far as this season goes, what’s done is done. He just has to push on towards the bigger picture of OT. He’s still very young and I’m sure he will produce some great swims in the very near future!

Clarks performance at NCAA was pretty great considering the fact that he had a virus and lost almost 10 pounds going into it. Everyone has moments of illness or injury in their sport. Its challenges like these and the comebacks they make that make them such great role models. Teaches kids not to give up and to push through the tough times and tough comments. So glad to see this iron giant feeling better and racing like the machine that he is. Doesn’t matter if he is breaking world records or having a rough meet because he is sick, this guy is a true role model to all athletes of all ages. Keep doing you thing Clark!

ummmm…. yeah… i hate to break it to you, but that isn’t what happened. your boy got too psyched out and became a head case.

Your endurance is probably cursed for life after that comment.. show some respect to the distance god.

Seriously “LOL”?!?! You must have been perfect your whole life and never learned any lessons of kindness. I do not care if you face mental, emotional or physical challenges in your journey its the way you pick yourself back up and keep trying that matters. Shame on anyone who knocks those things. They are very real and there is no good reason to point them out or trash people for having them. I have a child with all of the above challenges and happen to be grateful to those role models out there that “get back up and fight”. Clark if you read these post ignore the jealous haters and know that you are inspiring so many!! MANY!!! Go after… Read more »

He wasn’t criticizing Clark, he was criticizing you for getting facts wrong in the original post. When you do that, when multiple direct interviews and quotes form the coaches and teammates would suggest otherwise, it sounds like ignorant fans making excuses for their favorite swimmer performing poorly. At last year’s NCAAs the joke in the comments was that if someone swam poorly they weren’t fully tapered.

Okay good to hear. I am ready to climb back on the band wagon. Go Clark lets do this!

But can Smith Clark do it when it matters?