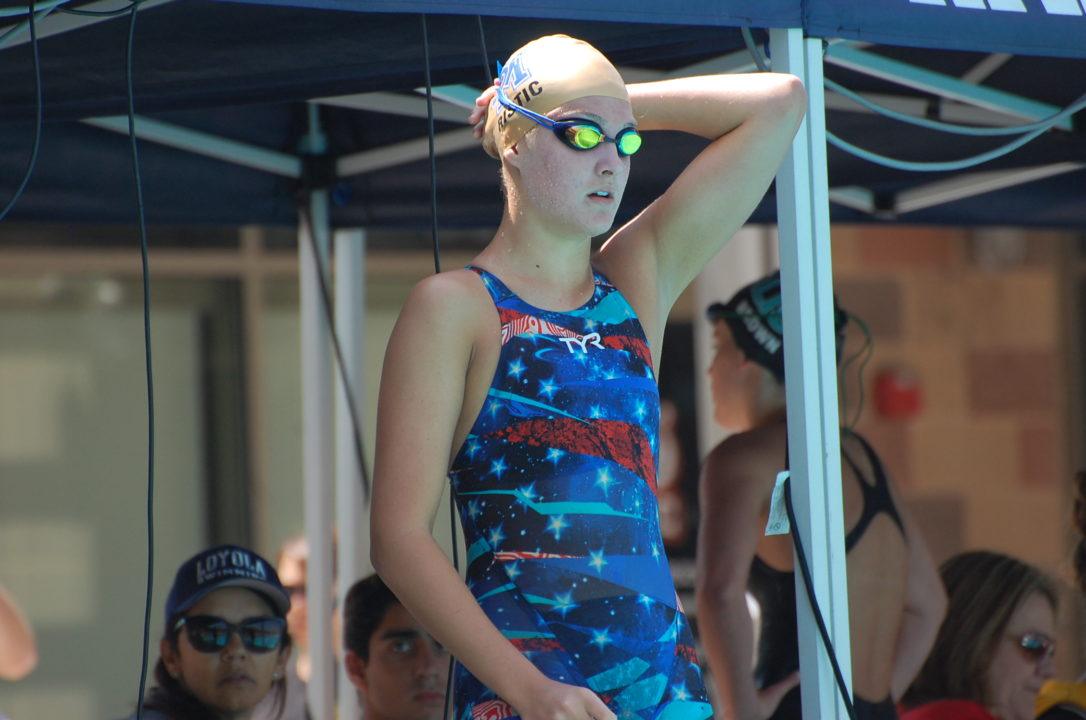 Juniors Ella Ristic (above) and Anna Delgado give Santa Margarita their best chance at repeating as CIF-SS Division I Champions. Archive photo via Anne Lepesant

The 2019 California High School Southern Section Championships kicked off on Wednesday morning in Riverside with prelims of the Division 3 and Division 4 (smallest schools) championships. The top division of the section, division 1, will begin with prelims on Thursday and finals on Saturday, with division 2 running Friday & Saturday.*

*Diving for all divisions began on Wednesday.

A name not returning to this meet on the girls’ side is Ventura junior Tea Laughlin. Last year, she won the girls’ 100 back in 52.77. At Winter Juniors, she improved that to 52.58. This year, however, Ventura slid all the way to Division III, which is where Laughlin will race this year.

The Loyola boys, who were runners-up at last year’s meet, are the favorites this year. The defending champions Northwood graduated a huge class, including 200 free champion Shawn Lou, while Loyola graduated no individual scorers and only a single relay swimmer.

Among the returning stars for Loyola is senior Connor Lee, who last year won the 100 fly in 47.82, While no other returning swimmer was under 50 at last year’s meet, this year he’ll be challenged by Canyons swimmer Kevin Childs, among others, who is seeded just a tenth back of Lee this season in 48.30.

Lee will also swim the 50 free where last year he was 4th. Sean Slusiewicz of Aliso Niguel won the 50 free title last year as a junior, but this year he’s opted to swim the 100 fly and 100 breaststroke and not the 50 free, which opens that race up a little.

The other Loyola champion returning is Mark McCrary, who won the 100 back as a junior last season in 48.94. He’s just the 4th seed this year, and he too will be battling the hot-handed Childs (top seed in 47.92).

Among the other names to watch on the boys’ side is National Age Group Record breaker Ronald Dalmacio, who begins his high school career this season for Harvard Westlake. He’s the 4th seed in the 100 fly in 49.12 and the 2nd seed in the e100 back, his specialty, in 49.13.