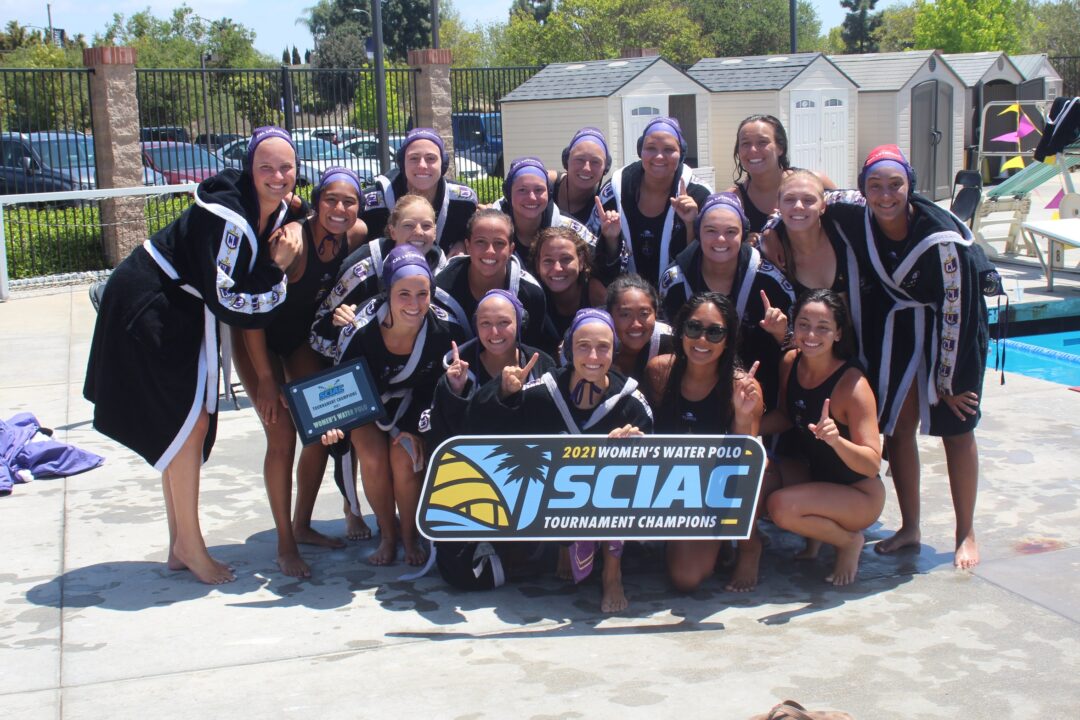 With the conference victory, the Regals get an at-large berth to the NCAA national championship tournament. Current photo via CLU Sports

With the conference victory, the Regals get an at-large berth to the NCAA national championship tournament. Lexi Rond was named the tournament most valuable player.

It is the second straight tournament championship for the Regals. No champion was crowned in 2020.

The game was exciting from the start as the first goal on the day was a five meter from Bethany Metcalfe. She went on to have two more goals, leading the team with three.

Elyse Koe had a buzzer beating goal at the end of the first quarter to put the Regals up 4-1. The Purple and Gold continued this momentum throughout the rest of the game. Koe had one more goal on the day as well as two assists and two draw exclusions.

Kaitlin Gardhouse was strong on the offensive side with four assists and one goal, as well as two steals at the other end of the water. The Regals had a strong first half in which eight of their goals came from, one of which came right at the end of the half from Gardhouse. It ended a string three goals in a row from Redlands and put the Regals back at a comfortable lead of 8-5 at halftime.

Izzy De Souza was thrilling to watch in goal as she made some difficult saves and tallied 15 on the day. The defense was on her side as together, they held the Bulldogs to just two goals in the entire second half.

The Regals controlled the game from start to finish and defeated Redlands 11-6.

The third-seeded University of Redlands women’s water polo team faced the No. 1 Cal Lutheran University Regals in the championship game of the Southern California Intercollegiate Athletic Conference (SCIAC) Postseason Tournament on Sunday morning in Thousand Oaks.  After trailing early, the Bulldogs worked to make the necessary adjustments but fell short in the 6-11 decision.

The game began with both teams warming up their offenses with multiple shots off the mark, as neither squad scored in the opening five minutes.  However, that changed when CLU got on the board on a penalty shot with 3:40 left on the first-quarter clock.

Although the Regals scored three more before the end of the stanza, Redlands pulled one back with 55 seconds remaining, when sophomore attacker Alyssa Baratelle (Lake Elsinore, CA) found the back of the net off junior attacker Holly Kvanvig‘s (Beaverton, OR) assist.

CLU went on to build a 7-1 lead by the 5:21 mark of the second stanza, forcing Redlands into an uphill battle. Baratelle elevated the Maroon and Gray’s offense with back-to-back goals over the next few minutes, with Kvanvig and senior attacker Kelly Klish (Glenview, IL) delivering the assists.

With about 90 seconds left in the quarter, senior attacker Katelynn Holloman (Wildomar, CA) drew an exclusion, which set up the Bulldogs’ fourth goal of the game.  After each team took a timeout, first-year attacker Courtney Sawin (Tacoma, WA) sent a perfect pass to sophomore attacker Katrina Nielsen (Houston, TX), who fired it past the CLU goalkeeper on a powerplay.

However, the Regals answered to extend their lead back to four by the midway point of the game.

Amidst multiple turnovers and ejections on both sides, the teams battled in a close, third quarter, with CLU earning a pair of goals to make it 10-4.

Following a timeout, the Bulldogs put Head Coach Chris Gielen’s plan into play with 6:17 left in the game.  After working the ball around, Redlands looked to first-year attacker Kaitlynn Pierceall (Beaumont, CA) to convert Sawin’s pass into a goal.

In the remaining few minutes, the teams locked down on defense to limit each other to only one more score, resulting in the 11-6 final.  For the Maroon and Gray, first-year attacker Emily Feliciano (Tacoma, WA) sent one into the back of the net on the final possession of the game.

Redlands (2-4) looks forward to hosting the University of La Verne in a non-conference showdown at the Thompson Aquatic Center on Wednesday, May 5, at 4 p.m.