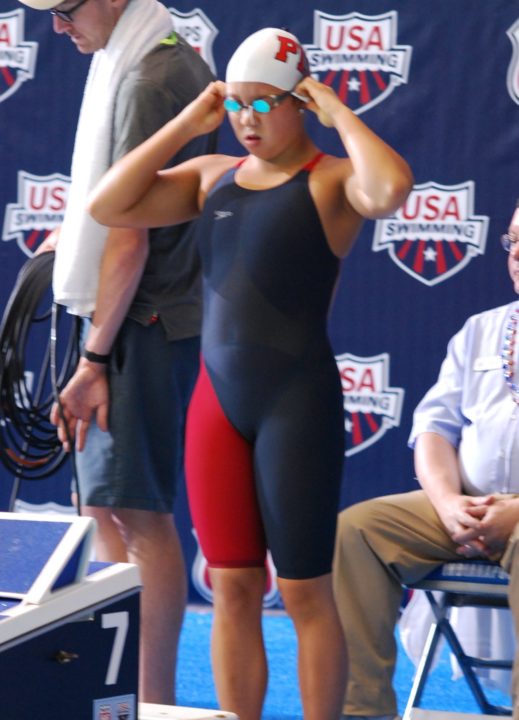 Cal had to wake up after an early charge from Florida today; Li lead a Cal comeback in their two day duel (Photo Credit: Janna Schulze)

With victories in four of the last six races Sunday morning, California held off a strong challenge from Florida to prevail in a two-day dual with the Gators, 238-210, at Spieker Aquatics Complex.

The Bears held a 135-108 advantage following Saturday’s 13 events. But Florida came out fast and won the first five events Sunday to grab a 170-66 advantage.

The Gator 200 medley relay team of Sinead Russell, Hilda Luthersdottir, Ellese Zalewski and Natalie Hinds was not going to let Cal 1-2 them in their relays this morning. Florida got the win today, holding off Cal by .16.

Longer freestyle races are not Cal’s strong point, and Florida capitalized on that in the 1000 freestyle. Danielle Valley and Alicia Mathieu went 1-2 for Florida, 9:53.64 and 9:56.29.

McKeever admittedly said that they need to use Missy Franklin’s versatility within their weak spots in their line up. She swam the 1000 today and was Cal’s best finisher in 10:03.94 for third.

After being beat to the wall in a couple of races yesterday, Elizabeth Beisel was in great form this morning. She took the 200 freestyle in 1:48.15, with her teammate Lindsey McKnight behind in second in 1:48.66.

Rachael Acker and Caroline Piehl would finish third and fourth for Cal, 1:49.51 and 1:50.07 – slightly off the performances from yesterday from the Golden Bears.

With momentum on Florida’s side, Hinds continued her sprinting dominance with yet another win in the 50 freestyle in the weekend. Her final time today was 23.09. Kaylin Bing was able to get Cal on the wall for second in 23.58.

Biesel returned back to the blocks, this time in an anticipated 400 IM race with Elizabeth Pelton and Celina Li. While the race was tight through the first half, Beisel pulled away with a sub 1:11 breaststroke split, plus a 56-high freestyle. She finished comfortably ahead in 4:09.54.

Florida’s Zalewski was second behind Li in 55.76.

Seeing there team needed to continue to fight, Pelton stepped up to take on Hinds in the 100 freestyle. Thus far Hinds had dominated all the individual sprints races. Hinds had a .6 lead on Pelton at the turn, but with an incredible second 50 Pelton got to the wall in 49.96 over Hinds in 50.00.

Florida bounced back in the 100 backstroke. An event were Cal is loaded with talent, Russell finished in 54.41, just over Stephanie Au in 54.45. Two-time NCAA Champion Cindy Tran was in third at 54.57.

After already two individual victorious, Beisel stepped up in the 500 freestyle to race Franklin. Franklin couldn’t keep up with Beisel’s move at the 250 mark, and Beisel would win the race in 4:45.91.

The Bears clinched the meet with a 1-3-4 performance in the 100 breaststroke. Marina Garcia Urzainqui, Yvette Kong and Melissa Bates sealed it up for the Bears. Urzainqui finished in a time of 1:02.39, just better than Florida’s Luthersdottir in 1:02.50.

To wrap up the two day duel, Cal would again have both A & B relay teams beat Florida’s A relay team. Franklin, Piehl, Camille Cheng and Pelton finished in 3:21.27 – with the first and last legs under 50-point.

Bootsma also anchored the B relay with 50.95.

4×100 video, Gal in pink is Dana Vollmer and standing next to her is Caitlin L.