Cal Girls Dominate On Day One of Mel Zajac International 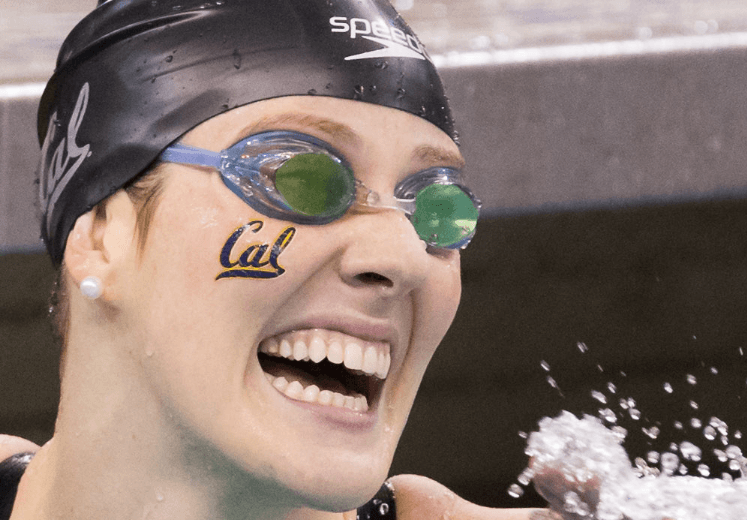 The Mel Zajac International being held in Canada this weekend has drawn quite a lot of international attention including some big names from American college swimming and the US national team.

Noemie Thomas took the top seed in the 50m fly with a time of 27.14. Thomas just came off a disappointing World Championships trials where despite being one of the favorites, failed to qualify for the Pan Pac and Commonwealth Games team. Thomas will have the chance to race Katerine Savard, Audrey Lacroix, and Sandrine Mainville, who all showed they can be competitive in the sprint fly event at trials, for the first time since trials. Look for Thomas to be quick Saturday night.

Geoff Cheah grabbed the top spot in the mens version of the event with a 25.01. Kyle Troskot was just behind him in 25.07. Coleman Allen who qualified for the Canadian national team took the fourth seed in 25.32, look for him to be a major factor in the finals as well.

The 50m backstroke was dominated by Cal’s golden girls as Rachel Bootsma, Missy Franklin, and Elizabeth Pelton took the top three spots. Bootsma swam the fastest time with a 29.08 followed by a 29.23 from Franklin and a 29.38 from Pelton. Most impressively was the fact that Bootsma just swam the 50m fly prelims finishing eighth and qualifying for finals. Canadians Chantal Vanlandeghem, Brooklynn Snodgrass, and Dominique Bouchard will also be competitive in the final, and will look to get ahead of the Cal girls.

Russell Wood who’s absolutely dominated backstroke in Canada this year had the fastest swim of the night in the mens 50 back to give him the top spot in 27.00. Jeffery Swanston from Newmarket followed him in 27.02, Geoff Cheah who took the top seed in the mens 50m fly took the third spot. Swimming veteran George Bovell qualified for the final as well with the sixth fastest time of 27.66.

The womens 50m breaststroke final has some big Canadian names going into the final. Tera Van Beilen who recently qualified for the 2014 Canadian Pan Pac and Commonwealth Games teams took home the top spot in 32.29. Tianna Rissling followed her in 32.69. Fiona Doyle who rivaled Van Beilen at the CIS Championships early this season grabbed the fourth spot in 32.70. Former world record holder in the event, Amanda Reason, swam a 33.32 for the seventh seed.

Brittany MacLean swam a 8:38.76 to win the 800m freestyle, a time around 14 seconds slower than what she swam at trials a few weeks ago. MacLean however showed that her training is kicking in by swimming a near perfectly synchronized 800m freestyle. She negative split the race, but her first 400 and second 400 were almost identical.

The womens 1500m freestyle was won by up-and-coming distance swimmer Tabitha Baumann. Baumann swam a 16:41.31 to absolutely obliterate her competition. That time slots her in as the 36th fastest in the world this year.

Ryan Cochrane grabbed the win in the mens 800 freestyle, also in negative split fashion much like MacLean. Cochrane swam a 7:57.22, but what was most impressive was his last 100m where he came home in a 56.99. To put into words how well he swam that race, you need to know that his first 100 split was a 58.73. He had a race strategy going in and clearly was able to implement it properly in the pool.

Is there a live video? thanks

Is there a live video? thanks

Where can I find full results?