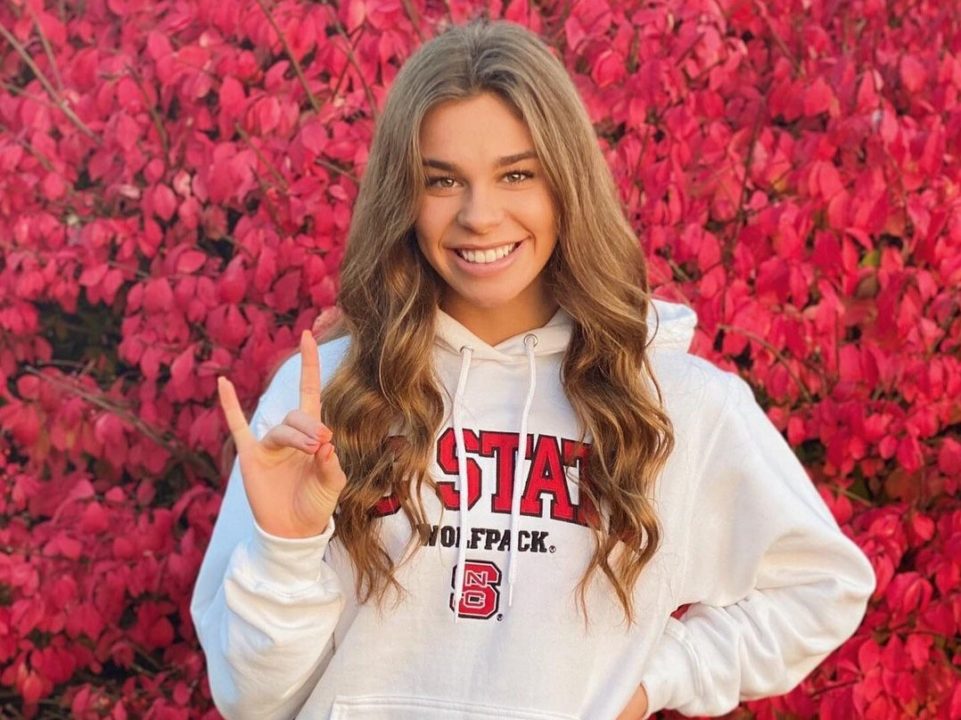 Bumble has announced that it is signing 50 female student-athletes under NIL deals including swimmer Cassie Moses (above) and water polo player Shaye Story. Archive photo via Cassie Moses

Bumble, a popular dating app, has announced that it is signing 50 female student-athletes under NIL deals as a part of the company’s 50 year celebration of Title IX.

With its announcement, Bumble’s CEO Whitney Wolfe Herd formally introduced the first 25 athletes who will be in partnership with the company under the new deals. According to a Bumble spokesperson, “The partnerships involve social media support, events and appearances, and media opportunities over a year.”

Moses, who is a member of the high school class of 2022, is a multi-time Junior Nationals qualifier specializing in the sprint freestyle and backstroke events. She recently competed at the US International Team Trials back in April, setting a season best in the 50 freestyle (26.39) en route to a 43rd place finish. Moses is a two time USA Swimming Scholastic All-American, and is set to begin her NCAA career at NC State in the fall. As of publishing, she has 48,100 followers on Instagram.

Story is entering her sophomore year at Stanford in the fall. Last season, Story only appeared in 2 games for the Cardinal, scoring 1 goal en route to helping Stanford win the NCAA Championship. In high school, Story was a member of the USA Futures National Team. As of publishing, she has 1,970 followers on Instagra.

“Bumble is not just a dating app,” said Moses, who is in a relationship, “but it is also a way to make friends and find community. In addition to finding friends there is a way to move your career forward.”

The partnerships are a part of Bumble’s 50 for 50 incentive. The company commented on the partnerships in their media announcement, stating, “Fifty years ago, women in collegiate sports gained important protection from discrimination. Title IX of the Education Amendments of 1972, commonly known as Title IX, prohibits discrimination on the basis of sex in any education program or activity receiving federal financial assistance. While it opened doors for many, there’s more opportunity ahead for women competing in the National Collegiate Athletic Association (NCAA).”

“In honor of the federal law’s 50th anniversary, Bumble begins its support of a wealth of overlooked women athletes around the country. We’re embarking on a yearlong sponsorship of 50 remarkable women, with equal pay amounts across all 50 NIL (name, image, and likeness) contracts. The inaugural class of athletes are a small representation of the talented women around the country who diligently — and often without recognition — put in the work on a daily basis.”

The contracts were made possible under the NCAA’s updated NIL policy, which just went into place last year. Under the new rules, athletes are allowed to profit off of their name, image, and likeness through partnerships that would have previously made them ineligible for NCAA competition.

Need to move on from the back in my day narrative in regards to NIL in our sport. Speak with basketball coaches at the D1 level, a strong majority of them will say the 2nd question after what’s my playing time going to be is what’s my bag coach aka how much will I get paid.

This is so bizarre

This is what I read for advertising from Bumble implied- “Come meet our ambassadors! Young, attractive, recent high school graduates looking to date someone like you”

I hope they’re getting paid a bunch. But dang, this is a bit off-putting for me as a female collegiate athlete myself. I also don’t feel like this is a celebration of Title IX. But then again, these young ladies signed up for this so idk.

I’m obviously a little uncomfortable with this.

Rift in locker rooms across the nation incoming.

Unrelated but what is up with Dressel??? It’s been 2 weeks since the best swimmer in the world vanished, and there is no explanation.

This is one of the reasons swimming will never be as professional as the major sports leagues, lack of information especially on superstars.

Completely agree, part of making a living off swimming, particularly having sponsors, is telling the people that buy your products and watch you why you’re hurt. It’s getting silly. Tom Brady or Lebron or Phelps would have a press release within 24 hours

Agree, but Dressel has been open about his struggles prior to and since Tokyo, and I’d rather the sport be less popular than have our athletes lose some of their mental health. As you said, this is only one reason. I think a huge national league similar to the ISL but with 20-30 teams would be a big step. People often pick their athletes based on the teams they compete for and the cities that those teams are located in. 4 teams in the US and 4 international simply isn’t enough, and the competition is in bursts. We need a national league and there’s absolutely enough high caliber swimmers training in the states to make that happen. That would be… Read more »

My guess is mental health

A few weirdos in the comments on this one. No shock there. She’s obviously cultivated a marketable following on social media and that’s worth money in todays day and age. She’s the one who put herself out there and deserves to make the fair market rate for her marketability. Good on her. Hope more is to follow for her, more swimmers, and more non-revenue college athletes. NIL isn’t just for football and basketball players

But how? 67 posts on Instagram is hardly enough to get 48K followers. The “promotors” and “influencers” grind much more than that.