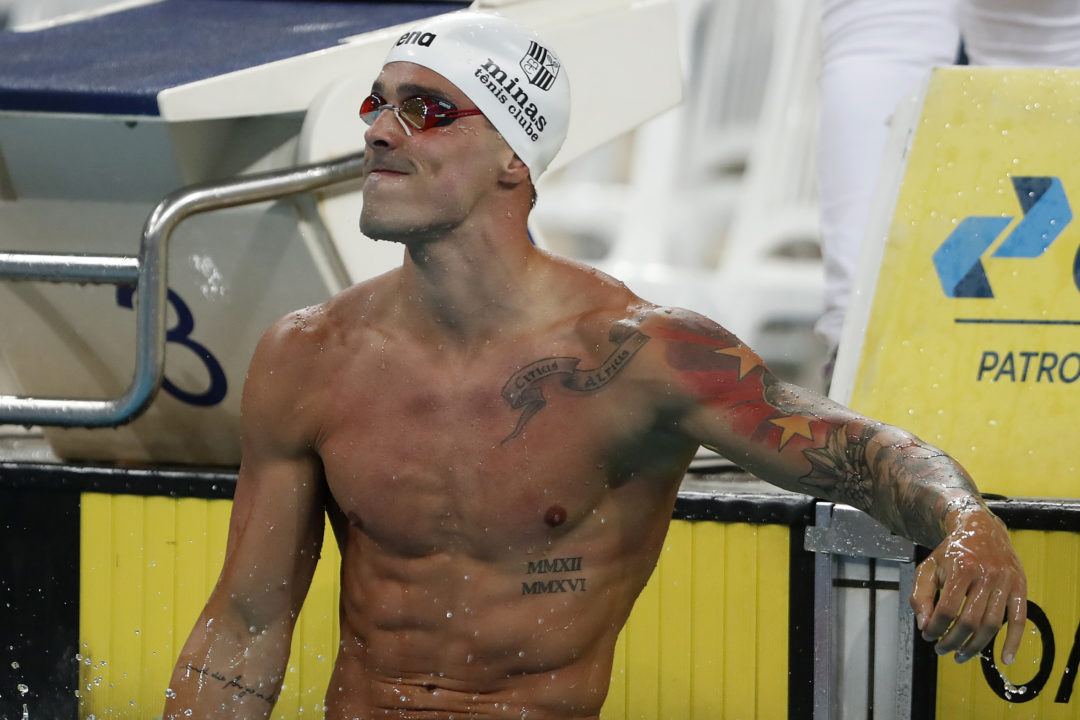 Fratus experimented with a 3-breath 50 in prelims, before going back to a more traditional no-breather in finals. Current photo via Satiro Sodre/SS Press

The prevailing wisdom in modern swimming is that over 50 meters, especially in long course, fewer breaths are better. For most elite male competitors, that means no breaths in a race that lasts typically under 23 seconds.

But during Saturday’s prelims at the 2018 Brazil Trophy national championship meet, he defied that wisdom when he swam a 21.76 while taking an almost-unheard-of 3 breaths.

The 28-year old Fratus took a silver medal in the 50 free at last year’s World Championships, which was his best-ever result at a global championship meet. He also enters this summer as the defending Pan Pac Champion, all of which he’s defending by training alone, under the watch of his wife and with some guidance from Brett Hawke, in Florida.

Watch a video of the 3-breath prelims swim below.

Was he trying to see if 3 breaths was faster? Or was he just breathing more so the race wasn’t as taxing?

Can’t wait to see him and Dressel throw down this summer!

2 of the best 3, dont forget about Proud!

Although Proud will be at Euros not Pan Pacs but understood what you meant!

AT Pan Pacs , we wont see Proud – read again . thanks

Braden, why are you still giving this guy a platform? Surely someone else has decent video of Bruno’s swim.

Agreed. Just type Alex Pussieldi into google and check out the results. SwimSwam, as a leading swimming news site (and rightfully championing the SafeSport campaign) should not be giving him a platform.

Linking to an Instagram post is giving someone a platform? Isn’t Instagram the one providing a “platform” here? I wouldn’t have even noticed whose post it was without you pointing it out, so thanks for spreading the word.