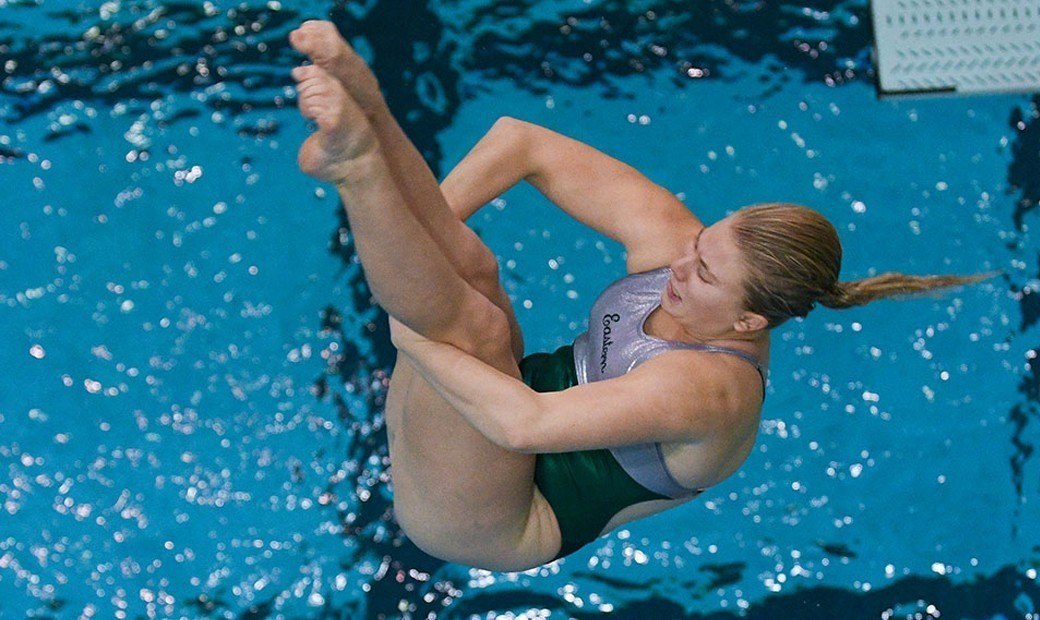 Junior Paloma Marrero (Merida, Spain) set a pair of school records in the 100 and 200 breaststroke and was part of the 400 medley relay team that broke the MAC record in the Zips’ double-dual meet wins over Bowling Green and Youngstown State.

In the 100 breaststroke, Marrero broke her own school record as she touched the wall in a time of 1:00.95, the 39th fastest time in the nation this season.

The junior broke her own school record in the 200 breaststroke as she cruised home in 2:10.59, the 25th fastest time in the nation this season.

Along with sophomore Madison Myers (Akron, Ohio), sophomore Sadie Fazekas (Windsor, Ontario) and sophomore Ragen Engel (Springfield, Ohio), Marrero was part of the 400 Medley Relay team that broke the MAC record as they posted the 19th fastest time in the nation this season with a time of 3:35.65. Marrero swam the 100 breaststroke leg of the relay in a blazing time of 59.97.

Freshman Brielle Johnston (Ottawa, Ontario-Catholique Franco-Quest) continued her sensational season at Buffalo for the Eastern Michigan University women’s swimming and diving team, Jan. 28. The freshman phenom was one of two Eagles to win multiple events, as the Eagles outlasted Buffalo, 164-136. The Ottawa, Ontario product began the day with a win on the 1-meter, scoring 256.88 points. She then picked up a win on the 3-meter springboard, securing her third consecutive sweep of the events. Johnston claimed victory with a career-best score of 316.73, the highest mark by an Eagle this season, as well as the fifth-best total in the MAC this year.

Julia Box had impressive performance at the Bulls’ this past weekend against St. Bonaventure on Friday and Eastern Michigan on Saturday. On Friday, Box placed first in one individual event, and two relay events. Her time of 55.62 in the 100 Fly put her in first place. Box also helped etched the 400 Medley Relay team’s name in the All-Time Top-Ten at Buffalo, clocking in at 3:49.63 for a first place finish. She also helped her 400 Free Relay team swim to a first place finish with a time of 3:37.40. Against Eastern Michigan, Box had another stellar performance. Box had two individual first place finishes: 100 Fly and 200 Fly with times of 55.42 and 2:01.96, respectively. Box also helped the 200 Medley Relay team to a second place finish, clocking in at 1:44.20.

Ella Moynihan led two 1-2-3 finishes for the RedHawks in their victory over Ball State Saturday. The first was in the 200-yard freestyle, where she finished in 1:52.34. The first Cardinal to touch the wall came in almost six seconds later at 1:58.06. In the 100-yard freestyle, Moynihan clocked in at 52.53, beating the first Ball State competitor by nearly two seconds. She also placed first in the 50-yard freestyle (24.32), where she narrowly beat out Peighton Gilbert from Ball State by 0.02 seconds. Moynihan’s efforts earned her 27 total points for the Red & White.

Senior Laura Dawson helped the Bobcats defeat the Toledo Rockets 188-71 in their final home meet of the season. Dawson kicked off the Senior Day meet as the lead in the 200-yard medley relay where they finished with a time of 1:45.21 to take first. In the 100-yard backstroke, the senior placed first with a 57.56 time. She ended the meet in the 200-yard backstroke where she earned her third win with a 2:04.87 time.

Garrett Clarke had an outstanding performance this past weekend for the Bulls. Clarke helped lead his team to two third place finishes against St. Bonaventure: 400 Free Relay and 400 Medley Relay. Clarke swam anchor for both relays. He helped his 400 Free Relay team clock in 3:14.90, and his 400 Medley Relay team clock in at 3:29.54. Clarke also took fourth place in the 100 Back with a time of 53.24. Clarke helped lead his team to break Eastern Michigan’s 72-meet win streak on Saturday with a 164-73 victory. Clarke took first in one relay event two individual events. He helped his 200 Medley Relay team to a first place victory with a time of 1:31.10; landing their team in Buffalo’s All-Time Top-Ten Performances. Clarke also took first in the 100 Breast and 200 Breast. He clocked in at 55.46 in the 100 Breast, narrowly beating out teammates Scott Huang and Luther Gordon. His time of 2:00.01 in the 200 Breast landed him in first place and beat out second place by over two seconds. Clarke also took fourth place in the 200 IM with a time of 1:53.55.

Sophomore Tosh Kawaguchi (Cary, N.C.-Cary) turned in a trio of the Mid-American Conference’s top times over the weekend, as the Cary, N.C. native was the Eastern Michigan men’s swimming and diving team’s top point scorer. In addition to swimming a leg of EMU’s second-place 200 Medley Relay, Kawaguchi claimed his fifth sweep of the Backstroke events this season. He also added a runner-up finish in the 200 Individual Medley. In the 100 Back, Kawaguchi clocked in with a time of 49.37, the third-fastest in the MAC this season. He followed that up with another win in the 200 Back, this time touching in with a time of 1:47.81, good for second-best in the league this season. Kawaguchi closed out his day with a career-best time of 1:51.27 in the 200 IM.

Evansville traveled to Ball State on Saturday where Hudson led the way for his teammates. Freshman Brandt Hudson began the individual events with a win for the Aces. He clocked in at a 9:59.33 in the 1000 freestyle, a season best. Hudson then continued to win the 500 freestyle by over ten seconds at a 4:48.68. He also participated in the 200 Freestyle Relay to touch in at 1:29.01.