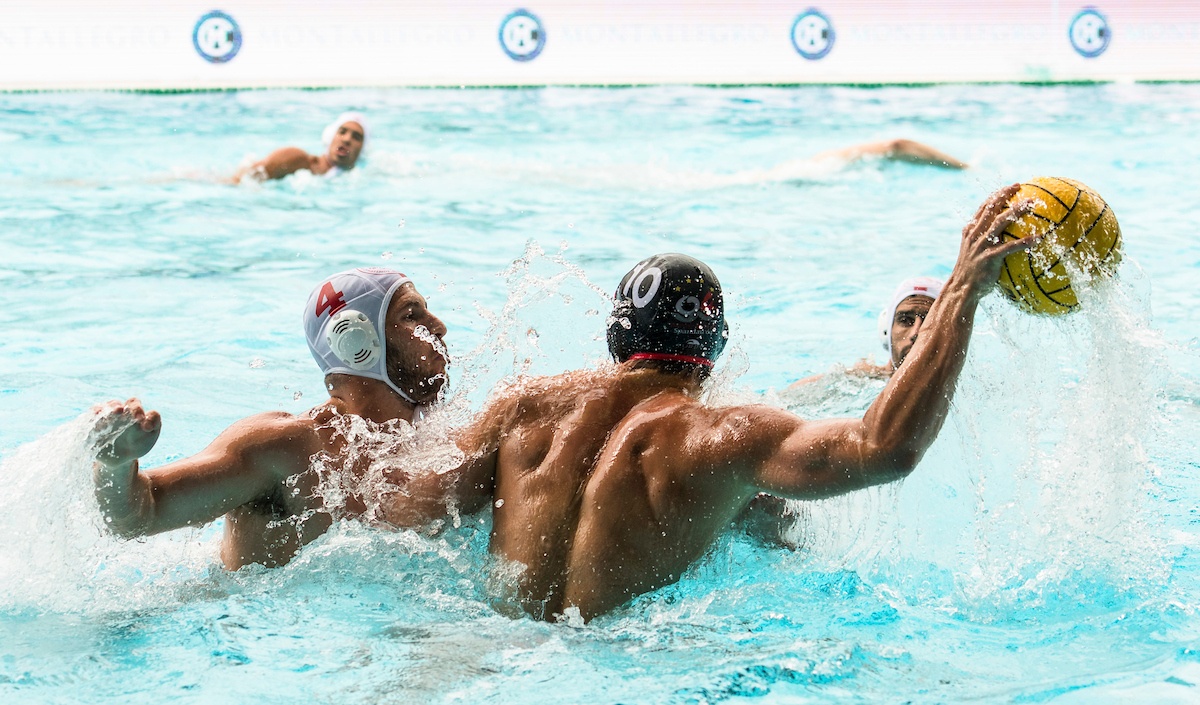 Olympiacos (GRE) meets Barceloneta (ESP) while Recco (ITA) faces Jug (ITA) in the semi-finals. For the first time since 2014 the title-holder couldn’t make the semis as Szolnok was downed by Jug in a thrilling game, while Brescia almost spoiled Recco’s home party as the forced a penalty shootout but the host club prevailed at the end.

Though Olympiacos was considered the top favourite against Spandau (GER), the Greeks found themselves in the middle of dogfight in the third period. They laid back too early after taking an easy 3-0 lead and the Germans came back as they usually do whenever feeling the chance. After 4-4, however, Olympiacos managed to find some rhythm, netted two goals and even though Spandau pulled one back for 6-5 and had a ball at the end for a tie, the Greeks advanced to the semis.

The next two matches saw the two Hungarian powerhouses being sunk (last May they played the semis against each other). First gone Eger: until half-time the game seemed to be a balanced one against Barceloneta but the Spaniards shut out their rivals in the entire second half and sailed away with an easy 9-4 win.

Szolnok came next in the rematch of last year’s final against Jug. A year ago it was a one-sided affair (10-5), this time it was a huge and even fight. Szolnok missed a penalty while leading 3-4 and instead of 3-5 soon Jug sat in the driving seat at 5-4. Still, the Hungarians came back strong and retook the lead for 6-5 but the Croats equalized shortly before the last break. In the fourth, after 7-7, the man-ups decided the outcome: Szolnok wasted its 6 on 5 (they missed last year’s MVP Andrija Prlainovic who was sidelined with an injury) while Jug made it and won the game 9-8. It meant that for the first time since 2014 the title-holder couldn’t make the semis while Jug reached the top four for the 4th straight occasion.

The day-ending Italian derby produced a fierce fight as it was expected, and Recco’s win – but not in a way it was expected. Brescia couldn’t find the tools against its arch-rival’s man-down defense in the first half while Recco took control and a 4-1 lead. The second was a totally different story as Brescia, after being 0 for 6 in the first half, made 6 man-ups out of 7 while its goalie Marco del Luongo posted a series of huge saves. Though Brescia lost its coach and two players with red cards as tensions ran extremely high, they avoided the straight defeat – unlike in the previous four matches played with Recco this season – and forced the penalty shootout. However, del Luongo’s magic finished here, the post and a save from veteran Stefano Tempesti sent Recco through to the semis. Interestingly, in these two met in this phase on each occasion in the last three editions, Jug upset the Italians in the previous two.

The Greeks took a flying start and led 2-0 after 2:04 minutes and they went 3-0 up early in the third. Spandau needed 15:09 minutes to get on the scoreboard as they struggled against Olympiacos’s tight defence. But once they found the key, they started using it effectively while the Greeks seemed to have lost their composure, laid back too early after 4-1 (even missed a penalty) and the Germans climbed back step by step. With 1:45 to go in the third it was even at 4-4 and the Greeks needed a 6 on 4 to take back the lead 15 seconds before the last break.

Spandau had a couple of possessions in the fourth before Konstantinos Genidounias netted his third, a fine action goal to give Olympiacos a 6-4 lead with 4:32 from time. The Germans missed crucial man-ups though Nikola Dedovic then brought them closer with 0:56 remaining. Spandau killed the last Greek attack and had one last ball to save the match to a penalty-shootout but the Olympiacos defense reacted well, and a steal sealed their tough win.

A brilliant action goal from Aggelos Vlachopoulos gave Eger an early lead but that was the last time the Hungarians could have some good feelings in this afternoon. Felipe Perrone put away a 6 on 5 and Martin Famera blasted one from the distance to turn the clock within 59 seconds. A fine goal from the centre by Josip Vrlic pushed Barceloneta 1-3 up and even though Eger levelled the score at 3-3, Alberto Munarriz’s double gave a two-goal cushion for the Spaniards once more. Eger hit one with 0:02 on the clock for 4-5 and in the third they had a man-up to go even once more. They missed it and that turned out to be crucial as Barceloneta netted two 6 on 5s nicely and led by three before the last break. Eger didn’t have any reserves left in the tank – as the time went by it wasn’t about winning but scoring at all on their side. They couldn’t, Eger remained scoreless in the entire second half while Barceloneta sailed away a great victory.

Jug opened the match with a better spell and led 2-1 deep into the first period but Szolnok could equalize just four seconds before the break. The title-holders came back strong in the second and netted two more in 74 seconds to go 2-4 up. At 3-4 an important moment came when Marko Bijac could save Milan Aleksic’s penalty – and started hunting Szolnok in the coming minutes as they were unable to score in the following 10:07 minutes. Instead of sitting on a 3-5 lead they were soon 5-4 down in the third but Gergo Zalanki’s fine individual action brought the Hungarians to even at 5-5. With 1:34 to go Batori even pushed them ahead but Viktor Rasovic’s brilliant action shot resulted that the third period ended with a 2-2 partial result to demonstrate how even this game was.

Jug gained the lead again thanks to a nicely played 6 on 5 which was followed by a long period with loads of physical battle and swimming. The grueling three-minute fight was halted by Zalanki’s blast, it stood 7-all with 3:50 to go. Luka Lozina’s outstanding centre-action was a worthy response from the Croats, then came the decision-time where man-up play determined the winner. Szolnok got the first chance but missed it while Jug did the same trick as at the beginning of the period and Luka Loncar put the ball away from the 2m line for 9-7, 56 seconds from time. Though Szolnok pulled one back later but the Croats kept the ball in the remaining 26 seconds.

Brescia opened the scoring from a fine center-action by Petar Muslim and Recco needed a bit more time to arrive to the game. But they did and within 104 seconds they took the lead while killing their local rivals’ man-ups, one after the other. Brescia missed six in a row in the first half while two blasts by Niccolo Figari and Aleksandar Ivovic tripled the hosts’ advantage. Brescia lost one of its key-player Vjekoslav Paskovic after some roughness enough for a red card.

Recco seemed to rule the game but Brescia came back in the third after they started making their 6 on 5s. They netted three out of three while only a lucky shot by Filip Filipovic kept the distance for Recco. At 5-4, Aleksandar Ivovic’s great action goal from the wing was a boost for Recco late in the third, though they missed their extra but Brescia’s man-up run was also halted in the dying seconds so Recco led 6-4 before the last break.

A great action goal from Muslim brought back the tensions immediately and a couple of fantastic saves from Marco del Luongo set up the scene for Brescia to go even. They couldn’t create any better opportunity, though, and from a 6 on 4 Dusan Mandic doubled the gap once more – while Brescia’s coach Alessandro Bovo was expelled from the bench. His players fought on, and soon Valerio Rizzo’s shot bounced in from the post in a 6 on 5, so it was 7-6 with 3:32 to go. What’s more, with 1:53 from time, it was 7-7 as Rizzo found the back of the net from the other wing – Brescia was 5 for 6 in man-ups in the second half compared to the 0 for 6 in the first. Recco wasn’t done, however, a 5m blast from Ivovic put them ahead again. With 54 seconds to go Brescia got the ball once more and could attack after a time-out. And they did it once more, Nora put the ball away in a man-up for 8-8, with 18 seconds remaining on the clock. Recco earned a 6 on 5 but del Luongo stopped Ivovic’s shot so a shootout decided the game (this was the first time in this season that Recco couldn’t beat Brescia in the regular time, which they could do in the previous for matches in this season).

Though their lucky ride ended here as del Luongo also ran out of magic. He found the directions but couldn’t catch any shot while Muslim hit the post in the third round and Nicholas Presciutti’s penalty was well saved by veteran Stefano Tempesti. On the other end all four shots were netted so Recco could prepare for another semi-final with Jug – for third in three years.