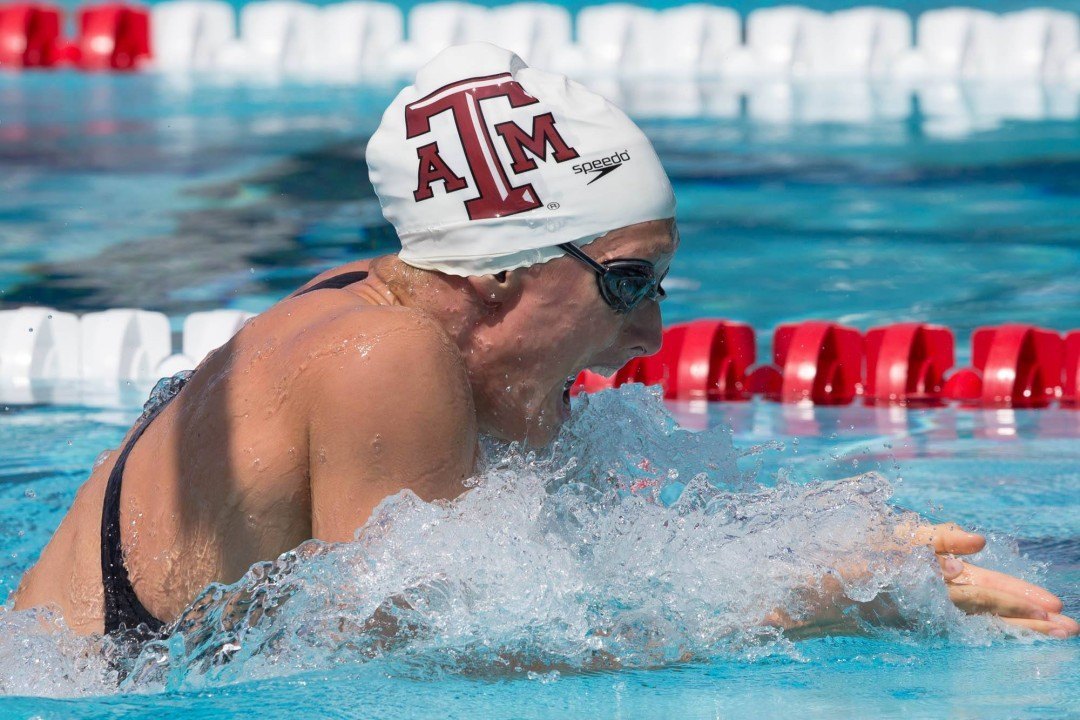 Among some big names at the Bill Nixon Memorial Meet were pro swimmers Laura Sogar and Breeja Larson. The duo that competed against one another in college, Sogar as a Texas Longhorn and Larson as a Texas A&M Aggie, were equally matched as they fought for the 100m breaststroke title last night in finals.

While eyes at this meet might have been focused on pros like Sogar and Larson as well as some of the top prep swimmers in Texas competing, ten-year-old Andrew Rogers stole the show in his age group.

After obliterating the field in the 400m free on Thursday by nearly twenty seconds (4:43.14 was his winning time), he touched the wall first in both of his events Friday night. He took the 50 fly by over two seconds (30.51) and then showcased his versatility in the 200 IM (2:32.78), winning that race by almost ten seconds.

If this young stud’s name isn’t on anyone’s radars yet, it should be after this morning’s prelims session. Rogers broke the 100m fly 10& under NAG record by seven tenths, a record previously held by Carson Foster (who broke Michael Phelps‘ record initially).

Several other older swimmers had impressive swims of their own at last night’s finals session. The women’s 15 & over 200 butterfly went to future Aggie Tiffany Futscher of Dallas Mustangs. Futscher put up a 2:19.97, the only swimmer to break 2:20. That time puts her within three seconds of her best time from last year, which was done at the 2014 GU LSC Sectional Meet in July, presumably with a big taper and shave. Futscher looks good with that time in mid-June, and could shave off a sizeable portion come taper.

Rising high school junior Lauren Pitzer had a solid showing last night, too. The Lakeside Aquatic Club swimmer split an impressive 25.74 on her club’s winning 200 free relay, and churned out a second place finish in the 400 freestyle (4:25.21). Winning that 400 free in dominant fashion was another 16-year-old, however. Mansfield Aquatic Club’s Haley Yelle swam a 4:20.99 to take the 15& over event. That time is nearly a personal best; watch for more of Yelle in the future, as she looks to be a fast-rising prep swimmer.

Saturday (today) live results can be found on Meet Mobile.