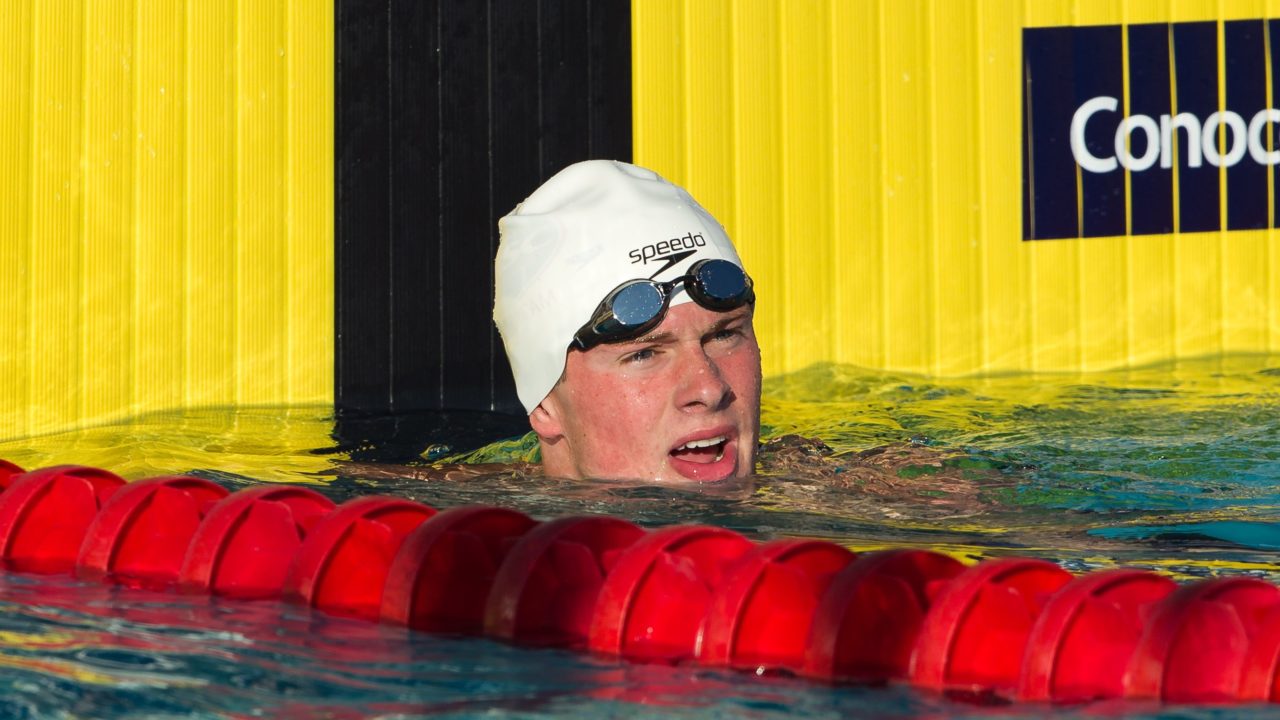 Jack Conger (pictured) and Rachel Bootsma hold down the top seeds in the 100 and 200 backstrokes. (Photo Courtesy: ©Tim Binning/TheSwimPictures.com)

But on Friday, she seems to have caught a second wind, and she rocketed to a top seed in the 100 back in 51.27 in the morning prelim. That is half-a-second away from her best time and National High School Record from her junior year (she didn’t swim high school this season). She’ll be looking to go somewhere under a 1:01 in tonight’s long course final.

Behind her are another pair of future college stars: Auburn commit Jillian Vitarius out of Blue Tide (54.39), and Virginia commit Rachel Moore out of Crimson Aquatics in the Boston area (54.49). Janet Hu, with whom Bootsma has been battling all meet long, also qualified 6th in the prelims.

In the men’s 100 back, Jack Conger put on a similar show with a top-seeded 47.51. But he will be challenged by 16-year old William Glass from the City of Mobile, who was 2nd in 48.31. Glass, a junior, is the best swimmer we’ve seen come out of the state of Alabama since Arizona’s Woody Joye in the class of 2010. Andrew Jovanovic, who trains with the Northwestern Club program, was just behind in 48.34.

The 100 back and the 500 free are back-to-back, which means we didn’t get to see the new National Independent High School Record holder Conger swim that 500 free again, but he would take another top seed later in the race in 47.19. That’s yet another National High School Record that is within reach for him in his senior season. Renny Richmond wasn’t too far behind in 47.49.

there is a star-studded final including top-seeded Garrett Powell (a teammate of Conger’s) in 4:22.25 and Stanford commit, and Illinois State Champion, Danny Thomson in 4:24.93. Neither swimmer was close to their best times, but we should see a good race in finals. Behind them is New Trier’s Reed Malone in 4:24.97. He’s been one of the real stars in this meet, and is the swimmer who chased Thomson at those Illinois State Championships.

Also a swimmer to watch out for is 15-year old Liam Egan out of Crimson Aquatics. He swam a best time of 4:26.71 for the 5th seed and is the youngest swimmer in this A-Final.

Sarah Haase’s best breaststrokes are still the sprint breaststrokes, but she’s still one of the best high schoolers in the 200 with her 2:10.78 in this race that is a best time by more than a second. That would have put her on the verge of qualifying for the NCAA B-Final in her weaker of the two breaststroke races, which is something Stanford will badly need next year. Ohio State commit Anne Lazor isn’t far behind, with a 2:11.60 for the 2nd-seed.

Bootsma added a top seed in the 100 fly in 52.05, with Hu close behind in 53.83. The swimmer to watch out for in this final is Mary Schneider. She had a decent-enough 50 fly prelim but then ripped the final; if she’s a better long course swimmer as that race indicates, she could be set for an upset.