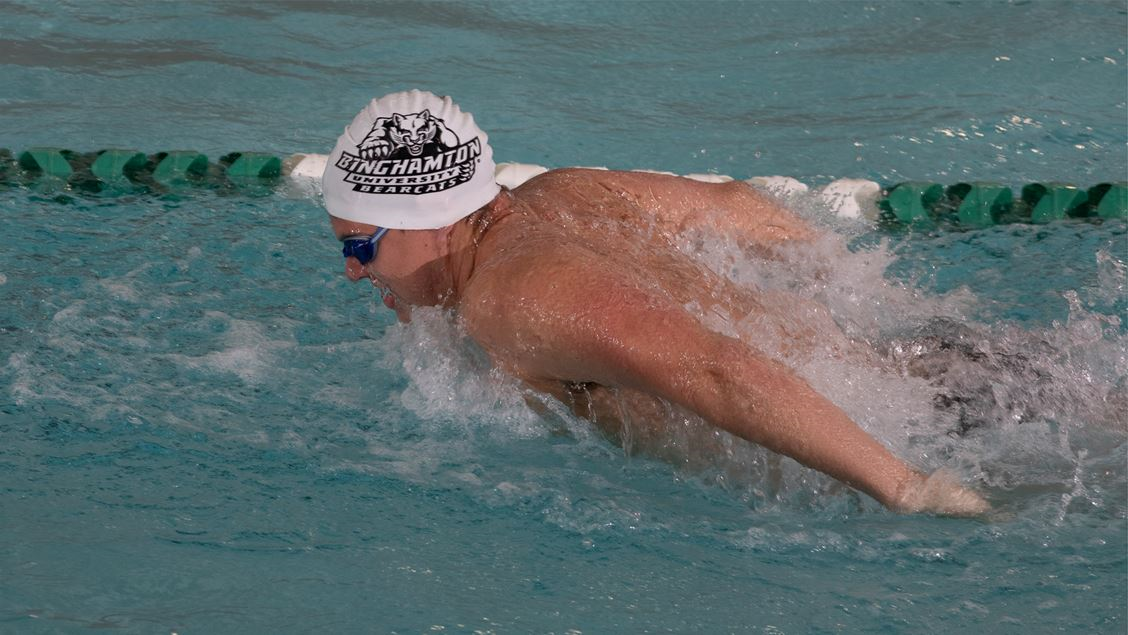 The meet marked the debut of first-year Binghamton head coach Jerry Cummiskey. He spent the previous six years on the staff at Bryant before being named the Bearcats’ head coach in July.

“This was a good meet,” he said. “We had some good swims on both sides and our freshmen did very well. We have improved since our Green-White (intrasquad meet) two weeks ago and are heading in the right direction.”

“It was great to get him his first win,” Bernstein said. “It’s been an easy transition, we all like him and we are excited about what is to come.”

Meyn also anchored the first-place 200 medley relay and 400 free relay teams, which clocked winning times of 1:35.08 and 3:14.83 respectively. He was joined by Morris, Board and Bernstein in the 200 medley relay as well as senior Tyler Meyers, sophomore Benjamin Beldner and freshman Ryan Maierle in the 400 free.

Smolar also spearheaded the swimming & diving team’s “Paint the Pool” campaign, which was geared towards spreading awareness and raising funds in the fight against breast cancer. Both teams wore pink caps to commemorate the event. This marks the second year in a row that the Bearcats have designated a “Paint the Pool” meet.

“Today was our Paint the Pool meet to raise awareness for Breast Cancer,” she said. “It was run through our Student-Athlete Advisory Council (SAAC) and I had a lot of help doing this from both my teammates and SAAC. (Former swimmer) Brooke Pettis came up with this idea last year and it was a big success so we wanted to carry it over to this year.”

Binghamton heads to Bucknell next Saturday for a 1 p.m. dual meet.

The Purple Eagles women’s swimming and diving team fell to both Binghamton and Siena in a tri-meet to open the season on Saturday. NU fell to the Bearcats, 214-84, and the Saints, 157.5-132.5.

VESTAL, NY – Siena Swimming & Diving opened its 21st season with a splash Saturday afternoon, spitting a pair of results in a tri-meet at Binghamton University in Vestal, NY. The Saints defeated MAAC rival Niagara, 157.5 – 132.5, while falling to host and America East heavyweight Binghamton, 210.5 – 86.5.

With the split, the Green and Gold picked up both their first dual meet win over the Purple Eagles and their first victory in a season-opening meet since 2015. The Saints are now 12-7 when facing Niagara and 1-6 against the Bearcats all-time.

Siena opened its season by winning three events, with all three coming from freshmen competing in their first collegiate action. Reilly King won the 1000-yard freestyle (10:56.20) by over two seconds, while Rory Kalac tied for the top spot in the 50-yard freestyle (25.34) and Jessica Shine took home the gold in the 200-yard individual medley (2:13.89).

Aside from nine newcomers that took the pool donning the Saints’ uniform for the first time, freshman Lydia DeLano became the first Saint since 2016 to compete as a diver for the team, placing fifth in the women’s one-meter diving (195.59) and the three meter diving (162.30) events.

The Saints also competed in a pair of relay events, placing third in the 400 freestyle relay and third in the 200 medley relay.

Siena is back in action on Saturday, Nov. 2 for a dual meet at Stony Brook at 1:00 p.m. The Saints and the Seawolves will meet for just the second time ever, with Siena grabbing a 172-58 victory in Loudonville in 2017.