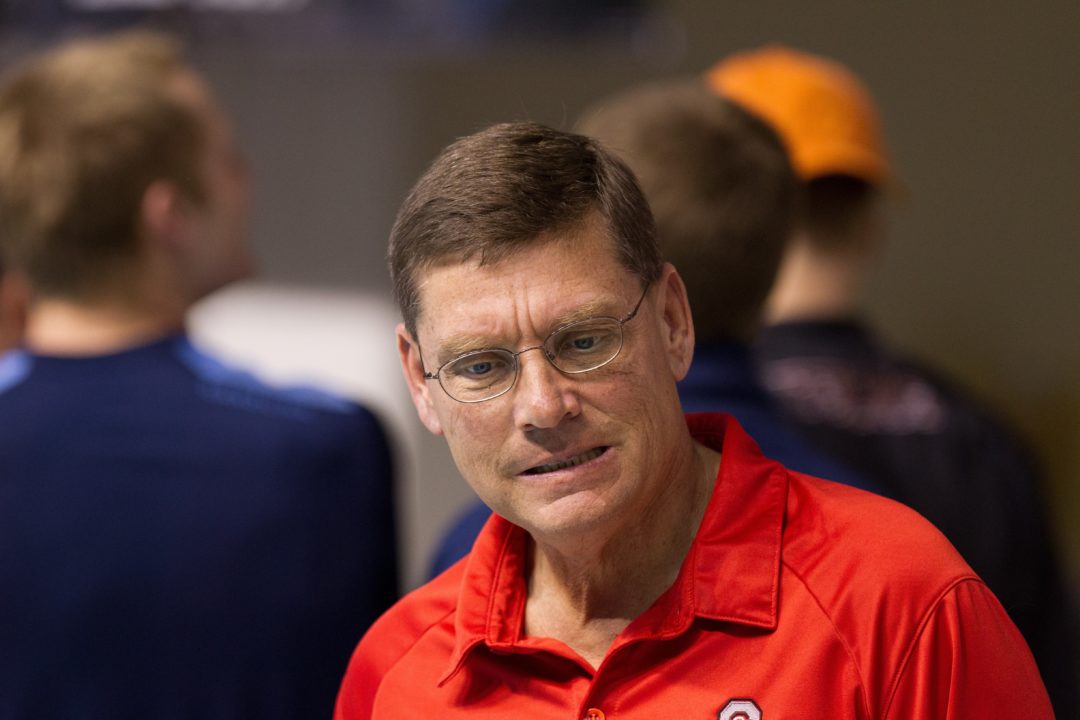 Bill Wadley is no longer the CEO for the American Swimming Coaches Association (ASCA), a source close to the organization tell SwimSwam. Archive photo via Tim Binning/TheSwimPictures.com

Bill Wadley is no longer the CEO for the American Swimming Coaches Association (ASCA), a source close to the organization tell SwimSwam.

The organization emailed members today, confirming that Wadley will be resigning, effective at the end of this month. We’ve reached out to ASCA for further comment and will update if any more information is provided.

Update: Here is ASCA’s full statement from Board Chair Mike Koleber: “The hard working staff at ASCA continues to do a phenomenal job. Unprecedented times seems to be an understatement nowadays. Yet they are committed as ever to the mission. The production and delivery of valuable and relevant coaching resources have never been better. We’re plowing forward for the Coaches of ASCA and we continue to be optimistic for the future.”

Wadley was the head coach for men’s swimming & diving for 28 years at Ohio State University. He retired from that post in 2017. Last fall, ASCA announced Wadley as its new executive director.

ASCA was led by John Leonard for 35 years, but has now had two executives last less than a year. Steve Roush took over for Leonard, but resigned after just nine months. Wadley took over the role in October, but is now out after less than three months.

Wadley was in the news recently as the owner of a Columbus, Ohio home where police shot and killed an unarmed Black man named Andre Hill. The killing has led to heavy criticism of the police officers on the scene, who failed to activate their body-worn cameras and left a significant delay before they started to provide first aid to Hill after shooting him. Adam Coy, the white police officer who shot Hill multiple times, has been terminated.

Wadley and his wife have owned the home where the shooting happened since 1989. Transcripts from the Columbus Police Department show that at least nine calls to 911 have come from that address in the past year and a half. In several of the calls, a woman reports physical abuse, referencing a live-in boyfriend whom she calls “Bill.”

We’ve reached out to Wadley for comment and for more information on the property, but have not yet received a response.

For once, I applaud the American Swimming Coaches Association. I dropped my membership in 2008/2009 because of the sleazy, corrupt and unethical behavior of then CEO, John Leonard, and the lack of oversight from the “Good Ol’ Boys” board of directors. I see there are some good young people on the board now and I hope they are serving because they are passionate about the sport and developing coaches and not for the perks, popularity and to build their resume and egos like many of Leonard’s cronies in the past during his sordid tenure. Wadley and Leonard are a stain on the sport and profession and the board should take legal and/or criminal action to recoup the money that went… Read more »

Between this and your posts on the Bama coaching change, I’m actually starting to like your posts. This is disgraceful 🙂

just curious, before these allegations came out against Wadley, what stain on the sport was he? I spent 4 years with him a long time ago and he was ok. I know he is known as Dollar Bill supposedly for being cheap on scholarships or not coming though on promises. Other swim related stuff?

Agree with your question. Let’s hear the facts of the story before the words “stain on the sport” get tossed around.

In all my years of coaching age group and high school swimmers, I have never seen a fellow coach bad mouth his peers and the schools they coached at more. The fakeness and phoniness was off the charts. He even said negative things to one of my swimmers and their parents about Eddie Reese and Jon Urbanchek…”They only got great talent and couldn’t coach athletes up.” I was aghast when I heard what came out of his mouth and hoped that none of my kids would choose to swim for him. He had no business being hired as CEO at ASCA and I question the wisdom of the individuals that were behind his hiring.

Did you hear it from your swimmer or straight from Bill?

Straight from Bill. It was a common and frequent occurrence when you had athletes being recruited by him. I’m sure there are many swimmers and coaches that would back me up on this.

Ok, just to clarify, many of your swimmers were told this by Bill and you were there with them and were aghasted multiple times?

I was present and he told me in person and he bashed other coaches and schools to athletes he was recruiting. I was surprised at the comments about Eddie, Job and several others. After that, his backstabbing was so frequent that nothing surprised me.

ok but thinking this was more of a recruiting ploy? Can’t believe that college football isn’t brimming with this type of talk when trying to flip a commit.

A lot of coaches do recruit that way and it definitely works with some kids. I feel as though many more are completely turned off when a coach who is recruiting them starts bad-mouthing a bunch of other coaches. Especially when those coaches are also recruiting that athlete and the athlete has established a good rapport with them.

I can answer this one. I was “the Wads”/ “Uncle Billy’s” first good swimmer in 1990. I told him first hand about Strauss and he did nothing but smile….sleazy maybe, ignorant yep.

You took the words right out of my script. Totally agree. I stopped re-upping my membership years ago after too many disappointing world clinics listening to the same talks year after year, outdated material basically plagiarized out of other coaching books and resold and finding out from an insider about JL and this situation here…

ASCA needs some soul searching to do. Maybe get back to the basics and really reach out to the newbie coach and do some REAL actual mentoring instead of crappy outsourcing in the form of an expensive class where we pay a ridiculously high fee to listen to John Bitter tell us how to run a club the “ethical” way (still waiting on the refund… Read more »

Wth does that mean?