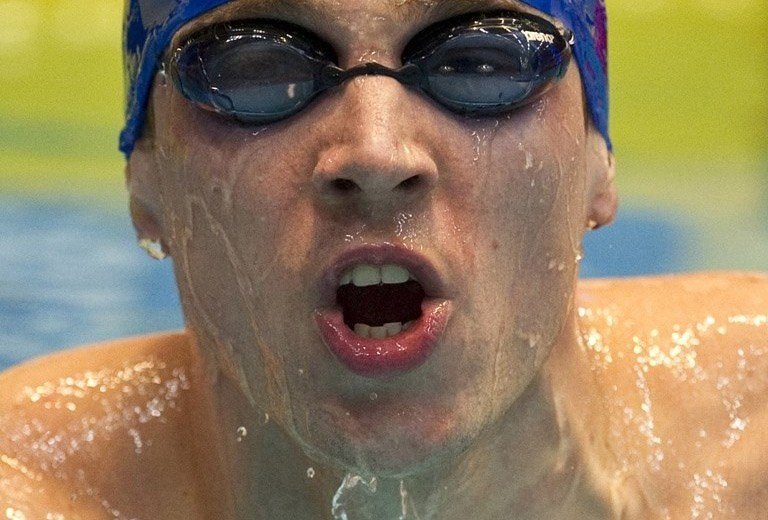 One was no surprise, the other was a shot to the gut.

The Germans are establishing very early at the 2012 National Championships and Olympic Trials that they are ready to race, and ready to hit some qualifying times. (German-mandated standards, based on the top 10 times at last year’s World Championships, can be found here on page 2).

Paul Biedermann kicked off the 2nd day’s finals session in Berlin by rocking a 1:46.70 in the 200 free that moved him to 7th in this year’s World Rankings. There was nothing particularly special about his swim – except that he was solid through the middle 50’s, which are usually his forte. But with him being one of the few Germans without a concern about hitting qualifying times at the meet, we can guess that this was just a standard week-rest swim for him, which makes it a very good one. (Biedermann was prequalified in the 200 and 400 freestyles).

As Biedermann calmly picked off the title, the race for 2nd was an outstanding one between Clemens Rapp and Dimitri Colupaev. Colupaev, who trains in the US at USC, took the race out extremely hard. In fact, he was actually in the lead at the halfway mark, which everybody knew probably wouldn’t last.

But he held on to a three-tenths lead for second going into the final turn, at which point Rapp had just a bit more gas left and pulled ahead for a .01 second win – 1:47.57 to 1:47.58. That puts Rapp on the Olympic team with a personal best in the individual race. Colupaev (who also swam a best time by eight-tenths of a second) will be on the relay team. This would have been an upset for Colupaev to pull off 2nd, but bodes very well for the German 800 free relay regardless.

In the women’s equivalent of the same race, Silke Lippok took the win in 1:57.93. She handled the tough trials timing last season as well as anybody, but with plenty of cushion was a bit slower at this year’s National Championship. That time actually misses the German qualifying time by a tenth of a second – so she would have to be awarded the chance to retry at the European Championships.

It would be somewhat devastating to the German cause if she didn’t make the team; the former 9-time European Junior Champ is one of the brightest young stars on the old continent; as much as the Germans are trying to make a statement about high standards with their stiff qualifying standards, the message that could be perceived is “we had the best junior freestyler in the world in 2009 and 2010; and by 2012 we couldn’t put her in an individual race on our fairly un-competitive Olympic Team.”

There was only one spot available in this 200 breaststroke, with Christian vom Lehn having been prequalified thanks to a bronze medal at last year’s World Championships.

With a 2:11.68 as the target, not only did Marco Koch better that, but he went out and won the whole race in a 2:09.48, which is the 4th-best time in the world. Although Vom Lehn is the reigning king, Koch is the National Record holder from the suited era. Still, this swim is a massive improvement for him, as it’s two-seconds faster than his previous textile best swim from 2010.

Vom Lehn took second in 2:10.07, which is about right on target for a swimmer who will contend for a medal in London. It’s certainly much slower than his time from last year’s spring Nationals, but in this case that’s a good sign. If he can swim a 2:10.0 with only a hair of rest, that means he should be able to cruise into the semi-finals at the Olympics. That will be a big advantage for him in a three-round meet.

Those two were well ahead of the field, with Maximilian Kraus taking 3rd in 2:14.72.

In the women’s 200 breaststroke, Sarah Poewe won in 2:27.47, which is far from the Olympic qualifying standard. Poewe was a prodigy in this race as a teenager, but sometime around 2005 the 29-year old shifted her focus from the 200 to the 100. That has caused a big dropoff in her times here, but meanwhile her 100 last year looked as good as ever. Watch for her to gun for qualification in that race on Sunday, though there she’ll face stiff competition from Dorothea Brandt (who is Jessica-Hardy-like: sprint free, sprint breast, no 200’s).