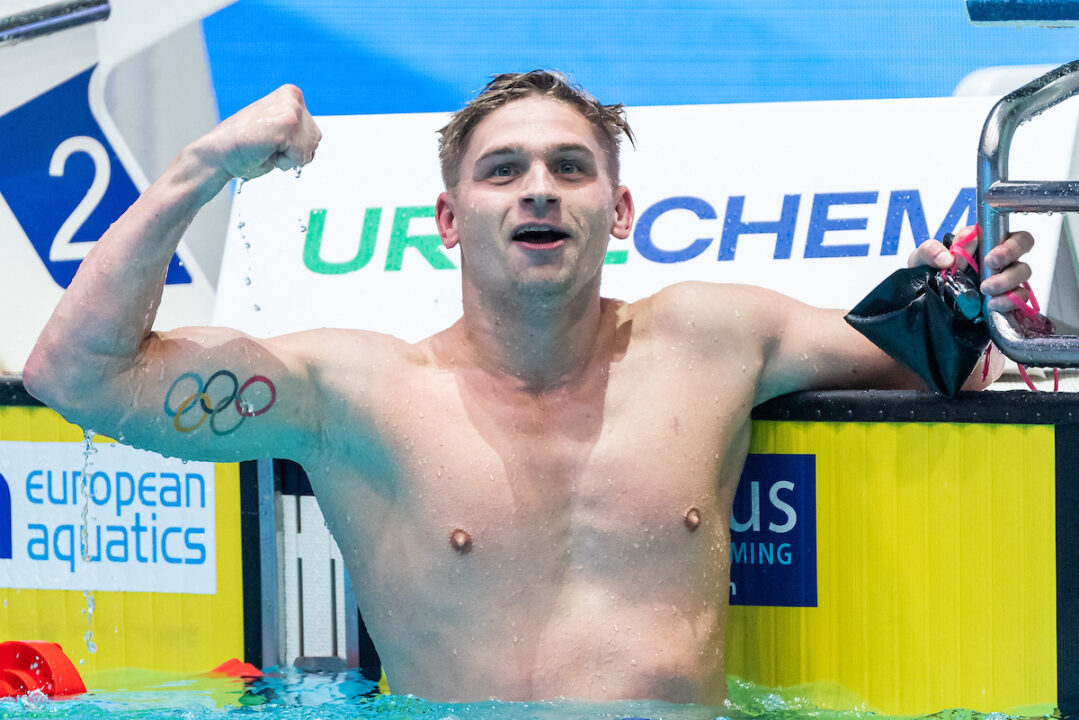 Catch up on news stories from around the world in this edition of Beyond the Lane Lines, featuring Poland's Radoslaw Kawecki. Archive photo via Giorgio Scala / Deepbluemedia / Insidefoto

He isn’t keeping the treasured piece of hardware for himself, however. Instead, the Pole is auctioning off the medal at the 2022 edition of his nation’s Great Orchestra of Christmas Charity (GOCC).

The GOCC is the largest non-governmental, non-profit charity organization in Poland and aims to raise money for pediatric and elderly care.

At the time of publishing, the current bid for Kawecki’s medal stands at 3650 PLN (~$918 USD). Bids are accepted through Thursday, January 20th here.

Kawecki is one of the most-accomplished short course 200 backstrokers ever. He won World Championships in the event in 2012, 2014, 2016, and 2021, and has also won six European Short Course titles in the 200 back as well, in addition to three European long course titles.

Current President of Swimming Australia Kieren Perkins has been appointed as Chief Executive Officer of the Australian Sports Commission, as revealed last month.

Perkins has been in his current position since November 2020, helping guide the nation to one of the most dominant aquatic Olympic performances in its storied history.

Swimming Australia CEO Eugenie Buckley said of Perkins’ new role, “This is a great opportunity for someone of Kieren’s professionalism, both within sport and the corporate world, to lead the Australian Sports Commission and we know he’ll be a great asset and support for Olympic and Paralympic sports in this country.”

The new role means Perkins will be leaving his Swimming Australia post, although the exact timing is to be determined.

After his suspension from the Japanese national swimming team in late 2020 due to an ethics code violation, 27-year-old Daiya Seto began competing under the umbrella Team Daiya at domestic competitions.

Upon his decision in October of 2021 to turn professional and no longer be supported by the Japanese Swimming Federation (JASF), the butterfly world record holder turned his attention to actually establishing an organization behind Team Daiya.

Although still a work in progress, TeamDaiya.com has been born. In eliciting applications for the squad, Seto explains on the site, “Since I was selected as a representative of Japan, I’ve had the opportunity to attend many swimming classes and events and, through such events, I have gained a lot of expertise.

“However, now that COVID-19 has reduced the number of games and events, I have fewer chances to interact with the people who support me.

“By becoming a member of TEAM DAIYA, I can give advice, consult and help others achieve their goals and dreams.

“The goal is to create a team where each person can grow, shine and pass on positive power.”

Last week the Lithuanian swimming community celebrated its achievements over the last year, with the annual awards ceremony culminating in the naming of male and female swimmers of the year.

Taking home the top male award was Danas Rapsys, the 26-year-old freestyle ace who reaped a trio of elite international medals before the year was said and done. Rapsys scored 400m free bronze in Budapest at this year’s European Championships while he also grabbed 400m free silver and 200m free bronze at the 2021 FINA Short Course World Championships in Abu Dhabi.

As a surprise during the ceremony, Russian big gun Kliment Kolesnikov and South African speedster Matt Sates shared messages of congratulations via video.

On his recognition, Rapsys said, “I am often asked what it feels like to receive such an award. I’m glad I can share this title of Best Athlete with other swimmers. We can train together, joke, play and all be equal. There is no single best or worse. We are all those best athletes. Every day we strive for our goals, we try to achieve them. Sometimes lucky, sometimes not. I hope that this year will be such that we will try to correct all those mistakes and be equal with everyone. And most importantly, the team. I want us all to be friendly, to get along well because that leads to the path of victory.”

For the women, it was Kotryna Teterevkova who earned the Best Female title, primarily for the 19-year-old’s triple gold performance at the 2021 Baltic States Championships. The teen topped the 100m breaststroke and 200m breaststroke podiums and also helped Lithuania score the top prize in the 4x100m medley relay.

Mike Favreau is set to be inducted into the Springfield High School (Vermont) Hall of Fame for his achievements as a swim coach there.

One of his team’s stars, Patty Porter Deschaine, went on to compete at St. Michael’s College. She, too, will be inducted in the Hall of Fame in March.

As cool as it is that he’s raising money for charity, why would you want to buy someone else’s medal? I feel like a medals value comes from your own personal journey to acquire it and just buying it off the legit champ cheapens that.

You’ve just asked a very big question that cuts to the heart of the entire sports memorabilia marketplace.

I’m sure someone could write several books answering the question “why,” but I imagine it would be something akin to “it gives a fan a feeling of connection to an athlete that they admire,” and/or “a big flex,” and/or some sense of national pride and wanting to own a piece of Polish history.

Many times, the buyer does so to support the charity benefitting from the sale of the medal/trophy, the returns it to the rightful winner of that medal/item.

Many times, but should be Always‼️