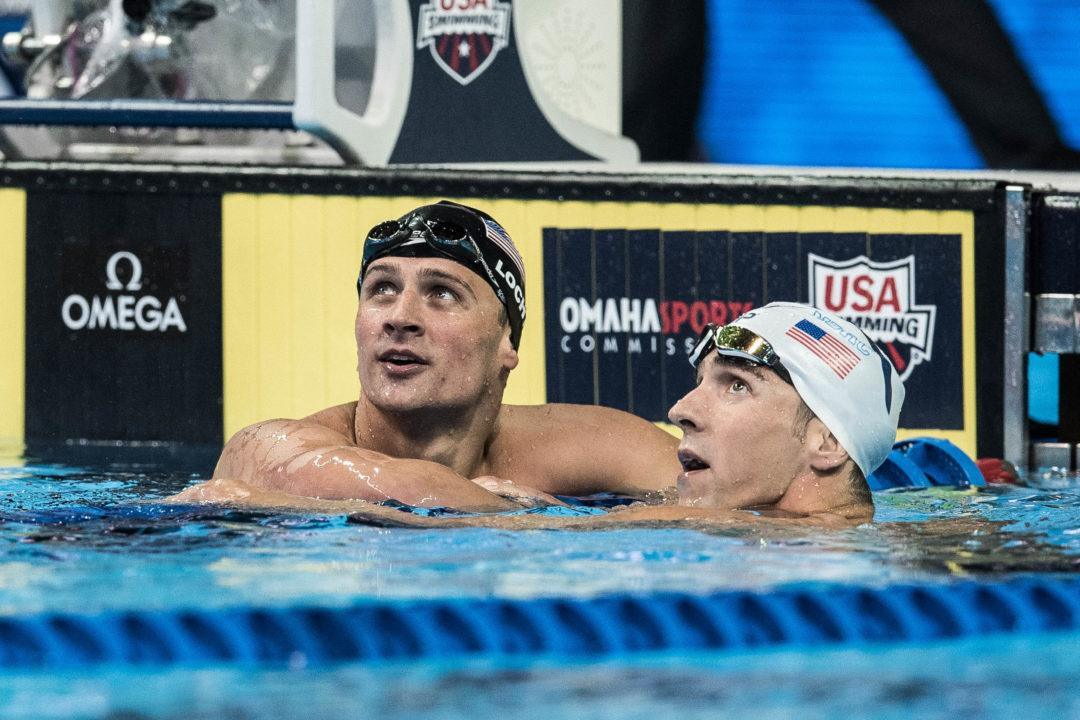 Michael Phelps has set an astounding 29 world records over the last 20 years, all coming in the long course, while Ryan Lochte has 14 of his own. Archive photo via Mike Lewis/Ola Vista Photography

We have been witnessing some swimmers set many legendary world records in the last few years, such as Katie Ledecky, Katinka Hosszu, Adam Peaty and Caeleb Dressel. And, amazingly, they have been able to even improve their performances over the years, setting multiple world records in a row.

But who are the swimmers with the most world records, say, in the last 20 years?

Swimming Stats’ Instagram page has published the list of the swimmers with the most world records set in individual events across this century so far (remember that the 21st century began on January 1, 2001, not 2000).

Unsurprinsingly, this is just one more ranking dominated by Michael Phelps. Across his career, he set 39 world records, more than any other swimmer in history. In individual events, he set 29 global standards, the first one being in 2001, kickstarting the century on the right foot.

The legendary Ian Thorpe could appear on the list, but he was not as “lucky” as Phelps. Thorpe set 17 world records during his career, which would put him #2 on the men’s list, only behind Phelps. But his records were set between 1998 and 2002, which means many of them (11) were in 1998-2000, ergo in the past century.

Curiously, in the men’s list, Phelps is the only one who didn’t break any short course world records – all of his world records were set in long course. His coach Bob Bowman shared the post as an Instagram story and wrote: “If you want medals at the Olympics, focus on LCM.” He knows what he’s talking about.

Maybe Aaron Peirsol doesn’t receive the credit he deserves as one of the greatest swimmers of all time. His figures show how great he is: 15 world records (13 in long course), trailing only Phelps in this century among men. Not to mention that all of his world records were set in only two events, the 100 and 200 backstroke, done while competing against other dominant names such as Lenny Krayzelburg and Ryan Lochte, which is very impressive.

Curiously, the top three on the women’s list are still active, and they can break more records in the years to come. In the men’s list, among the active swimmers, Adam Peaty appears in fifth with 11 world records, and Caeleb Dressel is eighth with seven world records. In other words, they still have some world records to break until they reach the top three – Ryan Lochte and Roland Schoeman are technically still active, but it’s very unlikely that they will move up on this list in coming years.

Wondering what the 100 LCM fly WR would be had Crocker not gotten sick at the 2004 Olympics.

I would like to see the lists adjusted to include only individual world records.

A boss who didn’t mess with SCM

could be interesting grouped by events, which would show diversity

Even if it is mathematically correct to say that 2001 is the start of the century, few people would argue this point. case in point, it’s commonplace to say the last decade was 2010-2019, not 2011-2020. swimswam’s top 20 swimmers of the last decade even covered 2010-2019. It’s this criteria that precludes two swimmers from making this list. They would otherwise be near the top of both of these lists, and don’t rely on scm records to get there

Yeah agreed. If you want to get technical then 2001 is correct, but no one was having millennium parties at the end of 2000. And as you say, SwimSwam uses the “incorrect” definition of a decade by starting with the 0 and ending with the 9, so not sure why they decided to change here.

Although ultimately this is arbitrary anyway. “This century” includes a lot of super suit world records that would not have otherwise been set, so people who had the opportunity to set super suit records really have a massive advantage, and also screws over more recent swimmers who would have set multiple world records already but are chasing ridiculous super suit times.

But some of Thorpe’s were in 1998 and 1999 so they aren’t included.
I really wish the list went back to 1970 or earlier really to give us a really broad view.

that’s all well and good on the men’s side, but going back to pre-1990 brings in ddr, which skews the womens rankings even more than scm does in this article

True. I was thinking Shane Gould etc. but you have a good point.

Phelps is the undisputed GOAT, imagine he actually gave it a shot at SCM, he could have broken so many more world records over his career.

According to his coach Bob Bowman, he would’ve broken fewer LCM records though.

Can’t do it all indeed.

He could have also pushed a 3.39 400 free LCM if scheduling permitted it at his peak (pretty sure I have seen a picture with a snippet of paper having a 3.39 scribbled on it), not to speak of the 200 back …

He did swim the 400FS at the 2003 WC’s in Barcelona and performed poorly. If memory serves me right he failed to make the final. Phelps could have swum a very decent 400FS if he had stuck at it but 3.39 I think would have been beyond even his considerable abilities.

Phelps was training for like 10 different events in 2003 and 2005 lol, his 400 was relatively slow because of lack of focus on it

An observation: It’s somewhat surprising (to me, at least) that for both the men and the women, the average time frame for world records was 5.3 years. Some “peaked” for only a year (Rupprath), and several over a two-year span (with an *for Dressel, Peaty, etc. as they’re still active and could extend things further). On the opposite end, Belmonte “peaked” for 9 years (I’d have to check to see what event was her first WR and last…guessing different strokes / formats), with Sjostrom & Phelps at 8 year peaks.

Bottom Line: winning consistently and remaining at the top of the heap (15 years for Phelps & Sjostrom) doesn’t necessarily mean remaining at “peak” performance for that individual.

It wasn’t surprising to me. That gap on the right was the first thing I looked at. I didn’t care about the names. It’s a well known variable in golf and other sports, that you only have so much time to win majors and world championships, etc., once the clock starts ticking. The largest gap on the list is 9 years for Maria Belmonte. Phelps and Sjostrom are the only two with 8. That’s what I’ve been trying to point out regarding Ledecky. As great as she has been, the prospect of more world records is very slim. Ledecky would equal Belmonte with the 9 year gap if she sets one in 2022. Maybe she should try short course. Those… Read more »

0
0
Reply
Lopez
Reply to  The Weez

I think Belmontes last one was the 4im, first one was also the 4im in Europeans.
Her most impressive, imo, is the 2fly in Doha, had she not got injured the 2fly LC ER would have fallen in Kazan.

I do wonder if Peirsol wasn’t so GOATed in backstroke whether we would have seen more of MP doing backstroke at major international meets.

i mean it’s pretty obvious; Olympics are in LCM so if your goal is Olympic medals, clearly LCM should be the focus

Great thought but at the expense of what event?