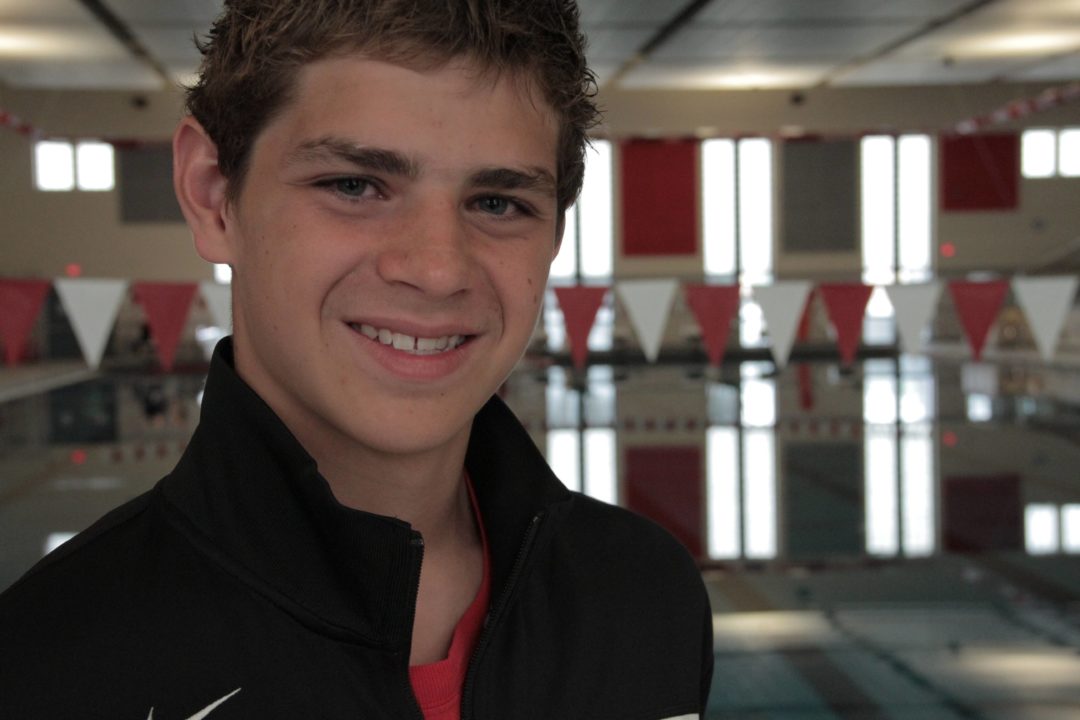 Michael Andrew, after his three races with Tyler McGill.

This past weekend in Fishers, Indiana, USA National Team butterfly specialist, Tyler McGill, raced Michael Andrew after a Fitter and Faster Swim Tour event. Andrew, who just turned thirteen, had been looking forward to the race since Tyler posted a video offering Michael the opportunity to go head-to-head.

“I saw that this kid was breaking national age group record after record, and I thought it’d be fun,” Tyler explained on deck moments before the race.

The Fishers High School pool started Michael’s record run. He broke the first three at the Santa Claus Invitational back in December, 2011. Before he turned thirteen, Michael had twenty 11&12 NAG records under his belt.

Michael is tall. That’s the first thing you notice about him. He’s over six feet. His father and coach is 6’5, and his mother, Tina, is 6’2. “His growth plates are wide,” his father said. “He’s going to be tall. How tall? We don’t know, but he’s going to grow a lot more.”

While tall, Michael’s still very much a kid, long and stringy, elbows and collar-bones protruding, all sharp edges. He’s definitely got more development ahead of him.

The Andrew family, fresh off a vacation in Florida, was low-key  as Michael and Tyler talked on deck.

“And we’re going to race a 25 breast,” Michael chimed in, smiling.

I asked Michael if he’d done his research, if he knew breast was not Tyler’s strongest stroke.

Each race happened in quick succession, almost like a lacate set in practice.

After Michael’s 10.21 in the 25 free, he shook Tyler’s hand, then rolled his head from side-to-side. It was clear he wanted to go faster.

Michael smiled, looked at Tyler, then back to us, “His (Tyler’s) underwaters are so fast.”

On deck before the 25 breast, you could see Michael getting ready, focusing. This was it, his last swim.  Off the blocks, his reaction time was faster, and it appeared his underwater pullout had a little more ooomph. (I was shooting from underwater with a GoPro.) While Tyler got more distance with his pullout, on the surface Michael stayed with him stroke for stroke.

As quickly as the races started, they were over and everyone was laughing and joking, discussing where to get a bite to eat. That’s when I noticed that Tyler and Michael has slipped away. They were up in stands, crouched over talking, just the two of them.

“That’s what this was really about,” Michael’s dad said, “a chance to talk and be friends.”

I hope there will not be a new big debate about Michael Andrew after this article because it’s a liitle boring. He’s too young, he swims in too many meets, he will be nowhere in two years, he has no childhood. These are always the same comments about him. And all these people will be the first to support him if he represents USA in 2016.
There are also articles on espn.com, sports illustrated.com about these races. Michael Andrew will be famous very soon. Perhaps sponsors will go to him. A Speedo contract of 10 years would be good for him.

Oh my god. Enough is enough. Congratulations on a successful year of records, I cant wait to see how this swimmer progresses in his career. Don’t get me wrong, I love fast swimming and especially when its being done the way they say theyre doing it. Training is evolving and this is just an exciting testament to that. Is it a benefit for this pre-teen to be garnering this much attention for swimming? At this point, I think anyone that has followed this story will be disappointed if he isn’t on the Olympic squad within the next 8 years. He could be a junior national champion/national champion, and will he ever be able to live up to the hype that… Read more »

Easy with the claims of Michael having “no childhood.” It is far from typical but he seems to be having fun. It looks to me like he is having an extraordinary childhood i.e. traveling the country meeting elite swimmers. All you can do as a by-stander is hope that this life is what the kid wants.

Leave it to Michael to decide where he is in two years. Just keep having fun, kid.

NDB – I think bobogigi was being facetious. He was mimicking some of the comments we’ve gotten on Michael Andrew in the past.

Thanks for keying me in, Braden.

I cannot help but notice how very wide MA’s underwater pull is. I know, I know…. armchair coaching. The kid is fast. That isn’t a common technique.

BOBO GIGI, we knew about the SI, AP, CNN & ESPN coverage long before the story broke. When a kid breaks 20 NAG records, the rest of the world responds appropriately…with praise and hope for the future. (I appreciate your sarcasm, btw. The debate is getting boring at this point.) I captured and edited the video above… I’ve done this a lot since 2007, and it’s work, time-consuming when you produce video after video. Working on the video above was simply fun. There is nothing more exciting than seeing new talent emerge. Tyler completely understands. You want to support kids along the way because swimming’s a tough sport. As for the family, it was insightful to spend time with them.… Read more »