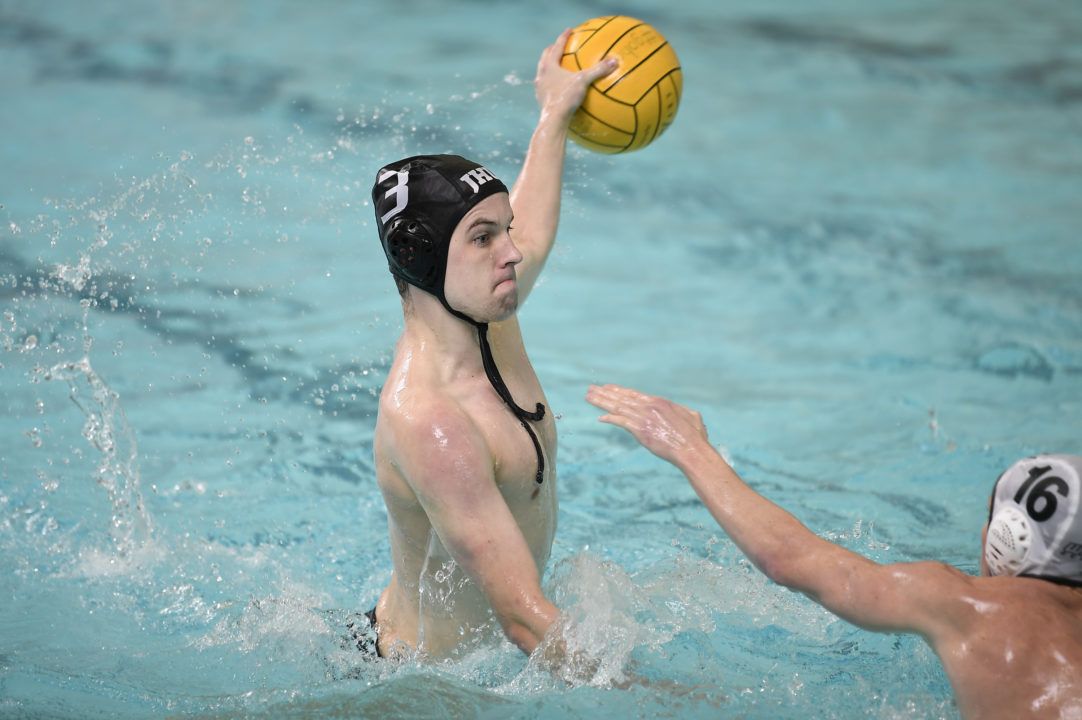 Finn Banks tied the Johns Hopkins program record for goals in a game, dropping in 10 in a win over LaSalle on Sunday, the highest tally of Week 4. Current photo via Johns Hopkins, Jay VanRensselaer

Finn Banks tied the Johns Hopkins program record for goals in a game, dropping in 10 in the Bluejays’ 24-14 win over LaSalle on Sunday. The effort, which matched teammate Jayden Kunwar’s vs. Iona on Sept. 8, 2018, marked the top scoring effort of collegiate water polo Week 4.

Loyola Marymount’s Blazo Mitrovic was next with a seven goal effort in an upset of #9 UC San Diego on Wednesday. He also chipped hat tricks vs. #4 Pacific on Friday and #11 UC Davis on Saturday.

There were 74 efforts of four of more goals and 88 hat tricks on the week.

Here are the best efforts by conference.

Player of the Week: Andras Levai, George Washington – Put in 10 goals and added six assists in three conference wins for the Colonels; notched five goals and two assists in 9-8 win over #16 Fordham; tacked on two goals and four assists in 14-8 win over Wagner; tallied three goals and three steal in 19-6 win vs. La Salle.

Defensive Player of the Week: Matt Taylor, George Washington – Made 30 saves, while allowing 16 goals for a .652 save percentage in three league victories for the Colonels; notched 11 saves, an assist and a steal in 9-8 win over #16 Fordham; tallied nine saves in 14-8 win over Wagner; added 10 stops in 19-6 win vs. La Salle.

Rookie of the Week: Oliver Fodor, Wagner – Recorded 12 goals, three assists and three steals an drew eight exclusions in three games; put in five goals in the Seawhawks’15-12 win over La Salle; added two goals in a 14-8 loss to George Washington; scored five times and chipped in two assists in a 20-13 win over Johns Hopkins

Player of the Week: Ben Hallock, Stanford – Notched 14 goals, 11 drawn exclusions, one assist and one steal in leading the Cardinal to a 4-0 record and the So Cal Invitational title; put in five goals vs. RV Air Force and added six vs. #4 Pacific; chipped in one score vs. #8 Long Beach State and two more vs. #2 UCLA in the championship game

Newcomer of the Week: Nikolaos Papanikolaou, Cal – Tallied eight goals and an assist, while drawing 12 exclusions and registering three steals at the So Cal Invitational; put in four goals vs. #2 UCLA and tacked on five exclusions and two goals vs. #5 USC.

Player of the Week: Keller Maloney, Princeton – Registered six goals, seven assists and eight drawn ejections at the So Cal Invitational; put in one goal and added two assists in a 14-6 loss to #5 USC; notched a goal and two assists in a 15-13 loss to #13 Loyola Marymount; scored twice and added three assists in a 12-10 win over RV Air Force; tallied two goals and added an assist in an 8-5 loss to RV Pomona-Pitzer.

Rookie of the Week: Yurian Quinones, Princeton – Notched seven goals, three steals, three drawn ejections and an assist in four goals at the So Cal Invitational; scored twice in a 14-6 loss to #5 USC; led the Tigers with a hat trick in a 12-10 win over RV Air Force; put in two goals in an 8-5 loss to RV Pomona-Pitzer.

Defensive Athlete of the Week: Murat Ersoz, Whittier – Held opponents scoreless in five of eight quarters on the week in wins over Pomona-Pitzer (9-3) and Cal Lutheran (12-5); recorded 13 saves vs. Pomona-Pitzer and added five against CLU

Player of the Week: Alexandros Athymaritis, Loyola Marymount – Drew a team-high 19 exclusions and scored 13 goals as LMU went 3-2 on the week; registered a goal, an assist, two exclusions and four steals in the upset win over #11 UC San Diego (17-16) on Wednesday; tacked on two goals, three exclusions and a steal in a 19-11 loss to #4 Pacific; scored four times and drew two exclusions in a 15-13 win over #14 Princeton; netted four goals in an 18-16 loss to #9 UC Davis; wrapped up the week with a two-goal effort in a 14-10 win over #10 UC Irvine.