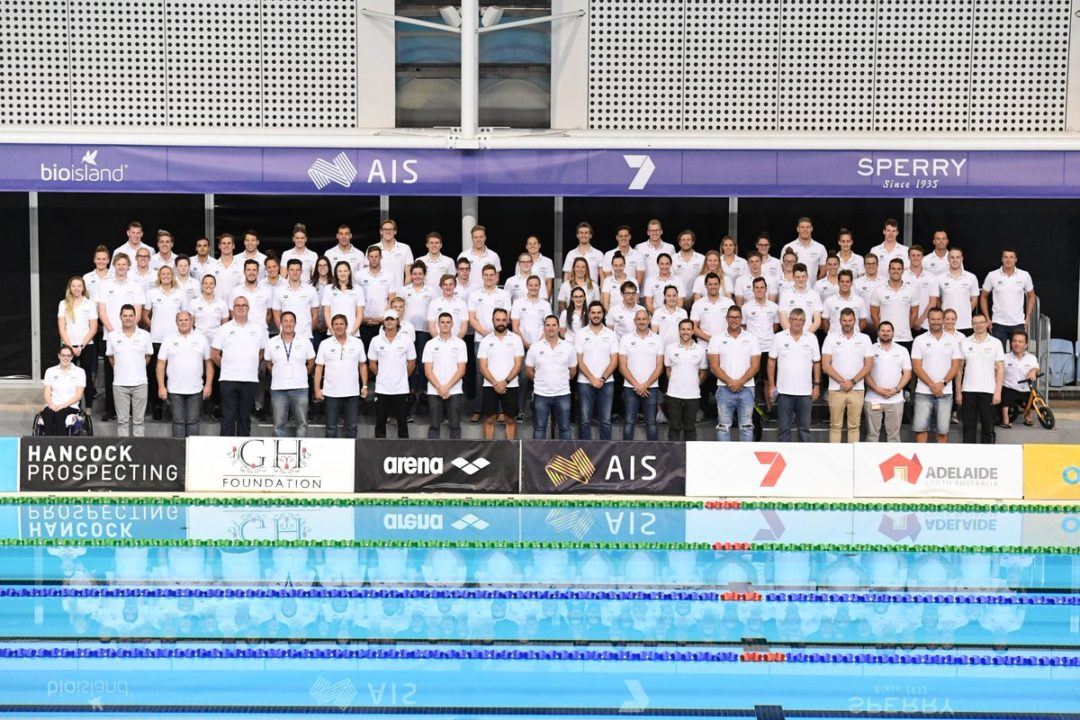 A team of 35 swimmers – 21 men and 14 women – will represent the Australian Dolphins at next month’s Para Pan Pacs in Cairns from August 9-14. Current photo via Swim Australia

Competing in the 17-year-old age category of the 800m free Rackley swimmer Samuel Short busted out the fastest result of his life, clocking a time of 7:52.18.

15-year-old Flynn Southam is on a roll at these Australian Age Group C’ships with the budding sprint ace firing off his second age record in as many days.

15-year-old Flynn Southam of Bond shaved another .10 off of his own previous Aussie age record in the men’s 100m freesytle.

Isaac Cooper kept the Aussie Age Record-breaking siege going by taking down the 100m back mark for 17-year-olds at the Age Championships.

Australian freestyle ace Mack Horton made waves both in and out of the pool at the 2019 FINA World Championships and spoke about it recently.

A team of 35 swimmers – 21 men and 14 women – will represent the Australian Dolphins at next month’s Para Pan Pacs in Cairns from August 9-14.

The team was named after four-days of solid competition at the Hancock Prospecting Pan Pacific Championship Trials at the SA Aquatic & Leisure Centre and includes 17 Queenslanders, seven from NSW, five from Victoria, four from WA and two from SA.

The Dolphins will be led by Paralympic stars Lakeisha Patterson (Lawnton), Brenden Hall (Lawnton), Cole (USC Spartans, QLD) and Rachael Watson (Chandler, QLD) who will be joined by a host of new faces, unveiled during the Trials.

Seventeen swimmers from the 2014 Para Pan Pacs in the US will return for this meet, a strong signal that the Dolphins will again be super competitive.

North Sydney’s 31-year-old Matt Levy is the oldest member of the team and he will be included alongside his coach, former Australian and Canadian Commonwealth Games swimmer, Stephen Badger.

In tonight’s action Para Program Swimmer of the Year Yeronga Park’s Rowan Crothers showed his power when he smashed his time from the heats in the final of the men’s Multi Class 100m freestyle, clocking an impressive 51.69 (953pts) to send a message to the opposition that he means business in Cairns.

Crothers cruised to victory ahead of Kawana Waters swimmer Liam Schluter (54.04, 832pts) and USC Spartans swimmer Daniel Fox (54.15, 827)., with both swimmers in formidable form as they too joined Crothers on the Dolphins team.

In the corresponding women’s event, after making her debut on the Australian Swim Team in 2006 Cole (USC Spartans) showed why she isn’t going anywhere, with the 26-year-old picking up her second Australian Championship crown for the meet in the women’s 100m freestyle Multi Class tonight.

Cole who clocked 1:04.37 (847pts) admitted she had lost count of her title tally but was excited to still be swimming fast and to get the chance to once again pull on the green and gold for the Para Pan Pacs.

Sitting in second place was late addition to the team, Ashleigh McConnell (Melbourne Vicentre) in 1:04.54 (841pts) with Patterson (Lawnton) up on the podium once again for third in 1:05.40 (830pts), with McConnell joining Victorian teammate Jaime-Lee Getson (Melbourne Torpedos,)

Cole won 100free only because they used the wrong world record time. Current S8 WR stands at 1:03.66 they used 1:01:47 which gave Cole the win over Patterson.
Result should stand as Patterson, Cole, McConnell

It should be Cole, McConnell and whoever followed her no Patterson at all. Why have Swimming Australia not done anything about Patterson? This is just obssurd to allow someone to make a fool of their own country by cheating.

Multi Class National Titles are determined by who swam closest to the World Record in their class. That happened to be Patterson and she is Internationally classified by the IPC – end of. SAL should overturn the result admitting that a clerical error was made. Cole, a 3 time Paralympian (not a rooky) and her coach – Head Coach at USC High Performace Centre (not a rooky coach) have had more than enough time to realise that she is not the rightful National Title holder for the 100 free. Given their combined experience I’m surprised that they didn’t realise before the medal ceremony. There needs to be more respect by everyone for the rules and the other competitors in these… Read more »

Oh poor Patterson……..but what about all the other S8 swimmers that she has ripped medals and titles off in the last few years due to her cheating? Some might call it karma.

And Swimming Australia, Cole and Patterson would be well aware of this, so why was Cole presented with the gold medal? Not like Patterson to go down without a fight when there is an opportunity to be in the limelight.

Before CG, Patterson was indexed for review later this year, so until her status as an S8 is “confirmed”, the WR she set in CG is not ratified.

Swimming Australia used the wrong S8 WR time – 1:01.47 instead of 1:03.66. Nothing whatsoever to do with Patterson’s CG non ratified WR relating to her current classification status of Review – which Cole also is btw.

Yes I agree that there was an obvious clerical error, but that is not Cole’s fault. Maybe call it karma for her being ripped off from the gold at Commonwealth Games by a swimmer who Should not have be there due to IM.

Yes Cole is also up for classification but hers will be a clear cut reclass of S9 as she is an amputee. Patterson on the other hand, well, let’s just wait and see what other conditions she adds to her long list before she gets there.

I do wonder when the Australians will be reclassed. It seems that they are deliberately being delayed for some reason.

Cole is not at fault for the clerical error but she is at fault for hanging on to a National Title that she didn’t rightfully earn according to the rules in place. End of. She, a senior athlete, needs to hand it over to Patterson. It’s not difficult.

Might be an idea to check out the weighting system for non-Paralympic event’s ‘base times’ before making any further comments. As I understand a five percent weighting is added to base times on non Paralympic events. Similar impact on s9 swimmer in 50 metre freestyle.

Non-Paralympic Event Weightings
A five percent (5%) weighting is added to long course events not included in the most recent Paralympic Games program.
When point scores for long course events are compared there are some anomalies that occur which result in a competitive advantage. This is influence by factors such as the depth of field, (i.e. the number of competitors that participate in a respective event internationally), whether an event takes place at key championships (i.e. is it a Paralympic event) and how old the world record is.
It is therefore easier to attain a high point score in events that are not regularly contested at international level. Adjusting the base time for these events creates a… Read more »

How can you hand over a title to the biggest fraud in para swimming and call it fair.
Clerical error or not no cheat should be rewarded for robbing genuine disabled swimmers of any medal.
It’s about time the photographic evidence was published so every one can see the magic hand at work.