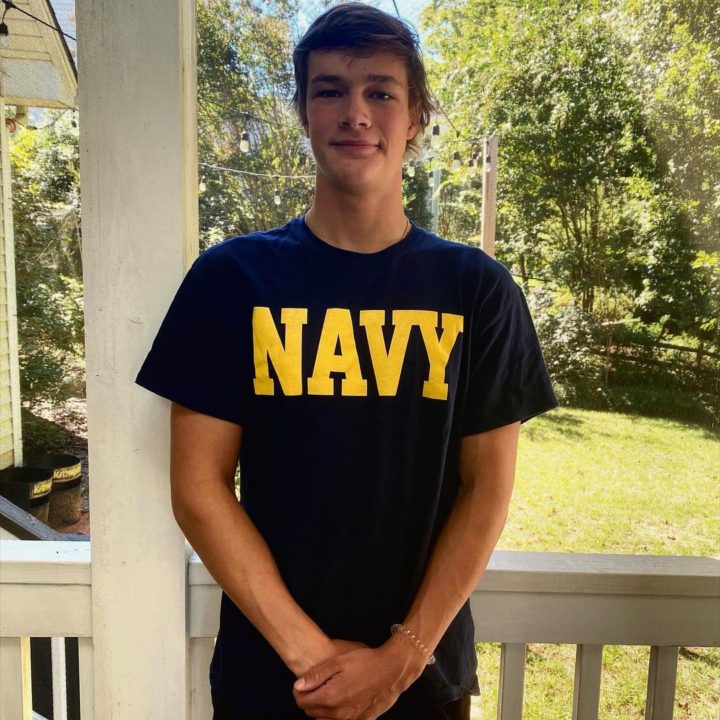 Austin Lockhart, who won 2 individual state titles in October at the South Carolina High School State Championship meet, will head to the US Naval Academy.

High school senior Austin Lockhart has committed to swim for the U.S. Naval Academy beginning in the fall of 2021. Lockhart lives in Fort Mill, South Carolina and attends Nation Ford High School there, but drives across the border to the Aquatic Team of Mecklenburg (ATOM) in North Carolina for his club training.

Lockhart head to the Naval Academy with an athletic resume rarely seen in a recruit to the service academies.

After swimming as a freshman and sophomore for South Carolina power Fort Mill High School, Lockhart transferred to nearby Nation Ford High School as a junior. He helped that program grow into a power itself, finishing 3rd at the 2020 5A (big schools) State Championship meet – two spots ahead of Fort Mill.

The 100 free win was a state title defense.

Lockhart’s best time in the 50 free and 100 free already ranks just outside of the school’s all-time top 10 in those events. He would have been Navy’s top finisher in the 100 free at last year’s Patriot League Championship meet, and would have placed behind only Army junior Billy Weber (44.20) and Army senior Nate Hein (44.30) at the conference meet in the 100 free.

Navy dominated that meet, winning its 16th title in 16 seasons in the Patriot League and finishing 374.5 points ahead of second-place Army. If there were a weakness for Navy’s men last season, it would be those sprint freestyles – though that weakness is relative to their general dominance, as the team still won both sprint free relays.

He joins an incoming class that includes James Lyon, Cohen Bruner, Thomas Morris, Nate Sukeena, and Conor Cranfield. Along with Lockhart, Sukeena (1:49.65/3:54.4 IMer) and Cranfield (4:26 in the 500 free) make for a Navy class that will be hard for the rest of the Patriot League to catch up to any time soon.

to Austin.That’s a huge get for Navy. Congrats to Austin.