Aussie Maddie Groves Says Missing Olympics Was ‘Worth It’ 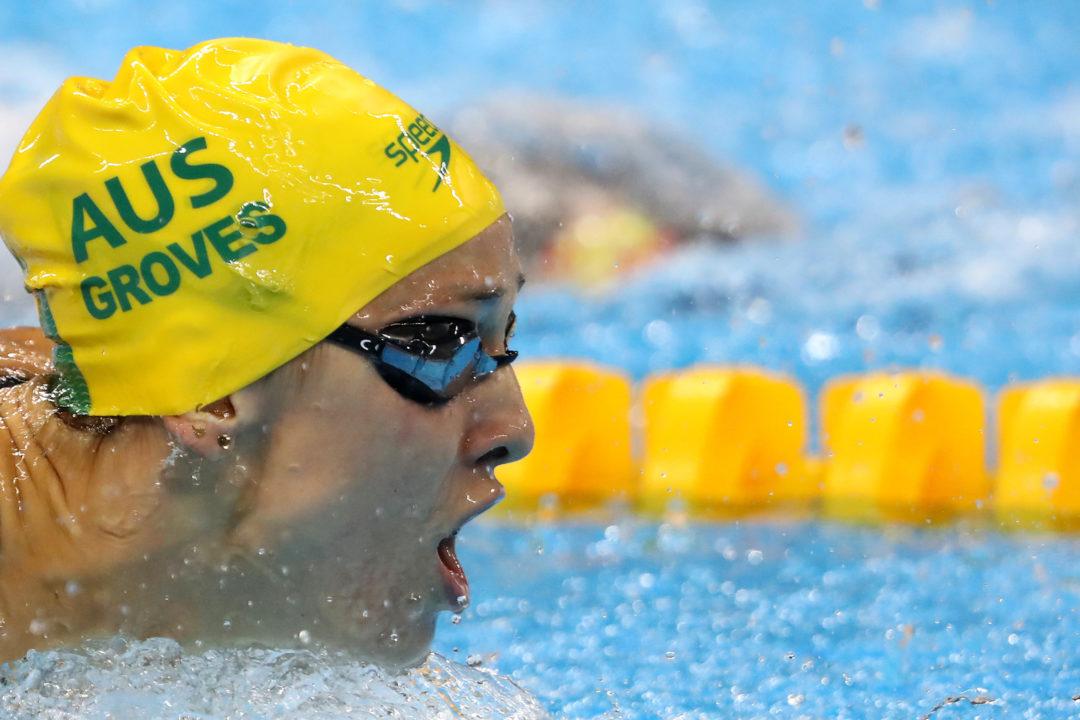 "It’s something I have been wading through and dealing with for a few years, so it wasn’t an off-the-cuff remark," said Aussie Maddie Groves. Archive photo via Simone Castrovillari

Australian Olympic medalist from Rio Maddie Groves has given more details on what she meant when she announced her withdrawal from this year’s Trials due to ‘misogynistic perverts.’

“I was calling a spade a spade,” is what Groves told the press this week, as reported by Reuters.

“It’s something I have been wading through and dealing with for a few years, so it wasn’t an off-the-cuff remark.”

As we reported in June, Groves’ social media posts included the following, “Let this be a lesson to all misogynistic perverts in sport and their boot lickers – You can no longer exploit young women and girls, body shame or medically gaslight them and then expect them to represent you so you can earn your annual bonus. Time’s up.”

Subsequently, an independent panel was set up, supported by the Australian Sports Commission (ASC) through the Australian Institute of Sport, and Swimming Australia. The panel’s purpose is to investigate issues related to women and girls’ experience and advancement in the sport of swimming.

On her bowing out of June’s Trials and ultimately opting out of trying to defend her 200m fly silver medal from 5 years ago, Groves said, “It was disappointing to miss out on an opportunity like that (Olympic trials) but the potential rewards absolutely outweighs the risk.

“But it’s worth it. If this independent panel can have some meaningful outcomes that make the sport safer and more enjoyable for all stakeholders, not just women and girls, that is more valuable than an Olympic medal.”

I’m kind of shocked (I guess I shouldn’t be considering some of the comments I’ve seen on here) at how much people are piling on to her.

Regardless of whether she was going to make the team or not, it took a lot of guts to do what she did. If it later turns out that she made it all up out of spite because she didn’t think she would make the team, then absolutely she should be criticised. But based on the response from SA and the athletes themselves it sounds like she was pointing out unacceptable behaviour that legitimately exists. The knee jerk reactions to allegations of discrimination and sexual harassment should not be to attack the victim.… Read more »

I probably would not talk to Kieran about girls stuff either .The way he dumped his wife & 3 kids is not a plus.

She actually didn’t quit because of “mysogynistic perverts”. She tacked that on afterwards. She quit because she wasn’t in good enough shape to qualify and somehow this got twisted into her seflessly giving up her chance at the Olympics to fight mysogyny in swimming.

Unless you have inside information, we don’t know why she quit. And I could be wrong here but it *feels* like a few people in this comment section are saying that a woman has somehow called out sexual harassment “incorrectly”. These aren’t accusations women make lightly, but I can see how others might be discouraged after reading comments like this. I think we should wait to see what happens rather than jumping to accuse her of using this as a smokescreen to mask a potentially poor performance.

She did not quit. She withdrew from Trials before they began which is her right & ought not be questioned.

It is up to her to prepare for future competitions , in the physical presentation as she sees fit . Certainly no official ( & it looks like that to me ) has any right to intervene with their opinions.& send DMs.

If medical issues give her the opening she could still get into the 56s for the fly . I’d be surprised at the 200 fly but 200 free is a possibility esp relay.

It is important to not be a misandrist. A goodly small number of those folk are out and about, also.

Please, everyone; just be reasonable, respectful, law-abiding, and ethically and morally respectable when you compete. That right there should just about cover all the bases for being a successful human being. I should know: why, “I’m the Executive Sales Manager..!!” (Fargo movie reference, for those to whom the reference might be a bit too obscure). Just keeping it light, folks…just keeping it light.

I know..!! No one wants to keep it light. Feelin’ the love on this one, huurrrrrrr…

This is called delusion. We have major issues with predators in this sport. If you are going to make an accusation and not name this person/organization so we can root them out, then you are a part of the problem and you only enable these bad actors more. You are not a hero, so stop acting like one.

Incorrect, regarding “major issues with predators in this sport”. There is a very, very *small* problem with “predators” in the sport of swimming. To say otherwise is disingenuous at best, and stating an outright, lying, calculating falsehood at worst.

Really? We are adding on average 3 people a month (usually dudes) to the banned list. I realize that this is a relatively small number compared to the total number of overall coaches, however these are the people that are caught, and most of these findings are for major infractions…they aren’t playing footsies with socks on. 25-30 coaches a year that are banned due to criminal infractions is not a “small” problem. And remember this, we are only talking about sexual infractions. There are a number of other coaches that are physically and emotionally abusive that need to be run out of the sport as well. Glad you are retired..stay that way.

“Glad you are retired..stay that way.”

Yes, I will. Let us all know when you grow and transcend beyond your current “refugee” status, won’t you?

LOL. I was ready for you to tell him to remain a refugee.

I got a “she” vibe off of that one, not a “he” vibe. With domestic refugees, you never know.

So stop inflating numbers and attempting to alarm everyone. There are NOT “on average 3 people a month” being added to any banned list (unless, of course, you might be utilizing a worldwide database with which I am unacquainted) in the United States. If you want to discuss worldwide figures, then… Read more »

all those years ago, if a high profile swimmer or coach or official , who knew what was called “the worst kept secret in US swimming” had used a platform to out the grubs in the sport , coaches like Rick Curl would have been excluded from the sport years earlier.
M.Groves used the platform of not competing whether she was competitive or not.

There is a railing that needs to call out Dean Boxall…….

Realistically Groves was not a contender for selection as her most recent races show she was nowhere near fit or in the league of those that did represent Australia. No shame in that but let’s be honest and not use terms such as withdrawal as this is misleading and an insult to those who had done the hard yards and qualified and would have done so whether Groves was there or not. Groves chose to make a statement but this should could not be confused with selection as she was never in the running this time around.

Shoot the Australians chose not to take Dekkers in an event with only 17 entries where she had one of the world’s fastest times in 2021.

Groves was never making it.

I feel bad for Dekkers I believe she would have made finals as well, she’d already been under the qualifying time at Aus nationals but because she had a bad meet at trials they just left her. I disagree with Australia setting such harsh qualifying times because you never know what will happen at the olympics for example no one expected both US swimmers to final or one of them medal because of the times they posted at trials but they proved people wrong I think Aus need to follow the FIBA A cut instead of setting ridiculous times.

To be fair, Wilson had extenuating circumstances – his grandparent passed away the week before trials.

It was a shame she didn’t make it, but Dekkers didn’t make the FINA A cut … because the 200 Fly worldwide has stagnated and the A cut is based on what it took to place 14th in Rio, which was faster than it took to final at the World Champs in 2019.

Dekkers had a bad final swim at trials. She’s 16 – she’ll learn from it and bounce back.

She really showed em by quitting

tbh I completely forgot about this happening. She has good intentions but went about it in far from the best way