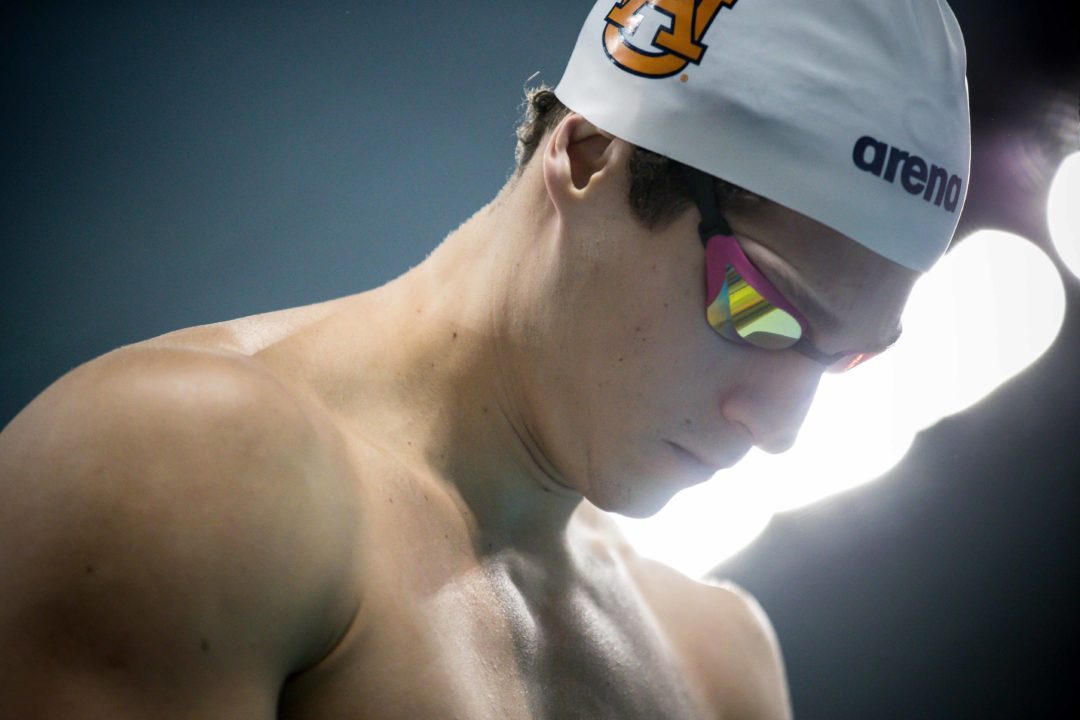 Aside from Delfina Pignatiello and Julia Sebastian, Grassi remains one of three Argentinian swimmers who have already qualified for the Tokyo 2020 Games. Archive photo via Jack Spitser/Spitser Photography

Santiago Grassi, one of the three Argentinian swimmers who have qualified for the Tokyo 2020 Games, contracted COVID-19 in the United States. Grassi has resided in the U.S. for four years as a member of the Auburn University swim team in Alabama.

The butterfly specialist announced his diagnosis through Instagram a few hours after receiving the lab results:

“On Wednesday night I went to sleep with a slight fever, the next day I felt very weak. I decided to call and do the test: the results came in today and I tested positive for COVID-19,” Grassi clarified. “In the next 14 days, I will be here at home, serving my quarantine. I’m fine, even much better than yesterday, just a little cold.”

Santiago Grassi is the current record-holder for the Argentine butterfly events, after clocking 23.65 in the 50-meter at the Mare Nostrum championship last year and 51.88 registered in the Richard Quick Invite in Auburn, also in 2019. A few days later, during the Pan-American Games, Grassi wound up swimming at 51.92, obtaining the FINA A cut for the Tokyo Games, now postponed to 2021.

A Pan-American medalist in Toronto 2015, Grassi already debuted at the Olympic stage in Rio four years ago, just as he was arranging his incorporation to Auburn University, where he is a senior majoring in Marketing and Management of Information Systems.

He finished his NCAA career in February at the SEC Championships, after the NCAA CHampionship meet was cancelled, with 7 All-America honors.

His 2020 season was hampered not only by rescheduling Tokyo 2020 for next year, but also by the possibility of signing his first contract as a professional swimmer for the International Swimming League (ISL). As SwimSwam Espanol anticipated two months ago, Santiago Grassi awaits official confirmation to enter the ISL, hired by a team that already debuted in the inaugural season for the novel international league.

Delfina Pignatiello, who has earned “A” cuts in the 400, 800 and 1500-meter freestyle, and Julia Sebastian, who has qualified in the 100 and 200-meter breaststroke, are the other two Argentinian swimmers who have already qualified for the Tokyo 2020 Games.

I’m glad to hear he is feeling better. He was scheduled to be at a Fitter and Faster swim clinic in PA next weekend. That would have been disastrous for those swimmers and their families.

Good that he got tested…

Why would it have been disastrous for those families? – they might catch the cold too?

Please don’t trivialise something that has killed over half a million people.

Are you talking about covid or the cold now? The cold has a much higher kc btw

Cold symptoms for some people and a ventilator for others. Better safe than sorry.

Hate to see it, hope his training situation was respecting social distance. Get well soon Santiago!

This is like reporting that one individual has caught a cold.

Except for that it’s not….. while I agree that COVID responses are blown out of proportion right now, there is no denying that it is worse than a cold. Look at some stats, they’re readily available. Definitely worse than a cold.

Except that he described it as “just a little cold”

I can only imagine this would be very stressful, in addition to the sickness. Hope he gets well soon!